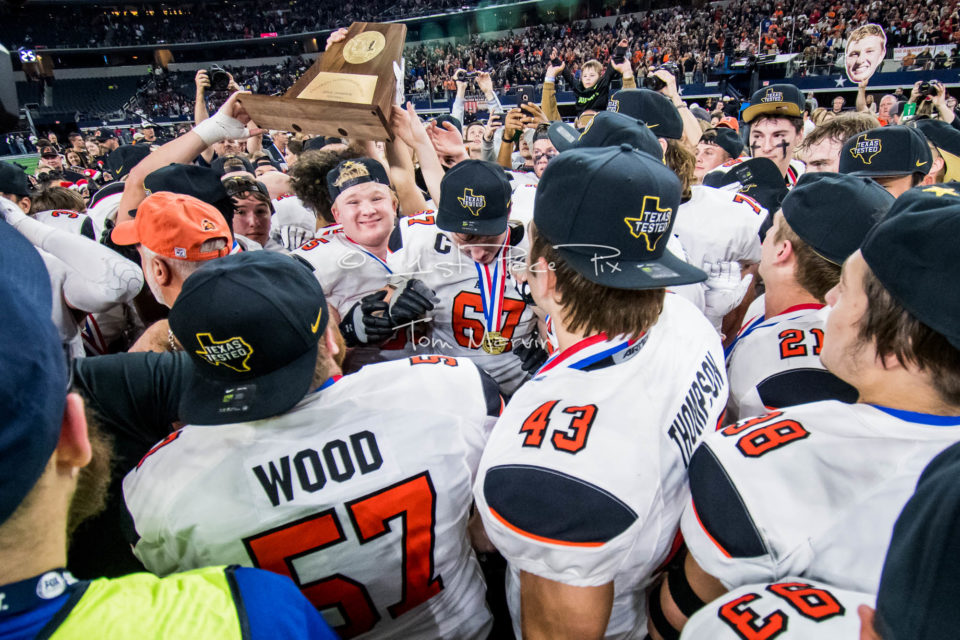 The Aledo offense jumped out to a quick 14-point lead then built it to as many as 18 points in the fourth quarter before holding off a furious Fort Bend Marshall rally to claim the Class 5A, Division II state championship at AT&T Stadium in Arlington with a 45-42 victory.

Aledo never trailed in the game but the Buffalos but the lead to three points with less than a minute to play and Caden Anderson recovered the onside kick to preserve the victory.

It was Aledo’s 9th state championship in football, a state record for 11-man teams.

Aledo quarterback Jake Bishop was named the game’s offensive MVP as he completed 11 of 16 passes for 244 yards and three TDs, and he ran the ball 13 times for 56 yards and another touchdown.

The senior quarterback had a hand in all four Aledo scores in the first half.

Aledo’s DeMarco Roberts was named the game’s defensive MVP. Roberts finished with 10 tackles, twice as many as any other Aledo defender.

Aledo got the ball first and the Bearcats drove the ball 67 yards in 8 plays to take the early 7-0 lead when Bishop threw a 28-yard touchdown to Money Parks.

Parks was money for Aledo all game. He finished with six receptions for 132 yards and two scores.

Jo Jo Earle, who finished with four receptions for 107 yards, scored Aledo’s second touchdown on a 40-yard reception from Bishop to make it 14-0 with 3:53 left in the first quarter.

Marshall came back to cut the lead to 14-13, but missed the extra point that allowed Aledo to keep the lead.

The Bearcats responded with an 11-play, 88-yard drive that was capped with Parks’ 34-yard TD catch. Earle also had a 31-yard reception in the drive.

The Buffalos came right back to cut the lead to 21-20 when quarterback Malik Hornsby scored on a 1-yard sneak with 1:30 left in the half.

After a DeMarco Roberts kick return to the Aledo 42, the Bearcats were in position to add to their lead before the half. A 38-yard pass from Bishop to Parks set up a Bishop 1-yard TD run with six seconds left in the half to give the Bearcats a 28-20 lead.

The third quarter belonged to the Bearcats and running back Jase McClellan.

McClellan finished the game with 25 carries for 218 yards and two second-half touchdowns. His 63-yard TD run capped a 99-yard scoring drive for Aledo that gave the Bearcats a 35-20 lead midway through the third quarter. On Aledo’s next drive, McClellan ripped off a 31-yard run to put Aledo in field goal range.

Marshall then began its comeback, but the Bearcats always seemed to have right response and held off the Buffalos to claim the eighth state championship won by Aledo in the last 11 years.