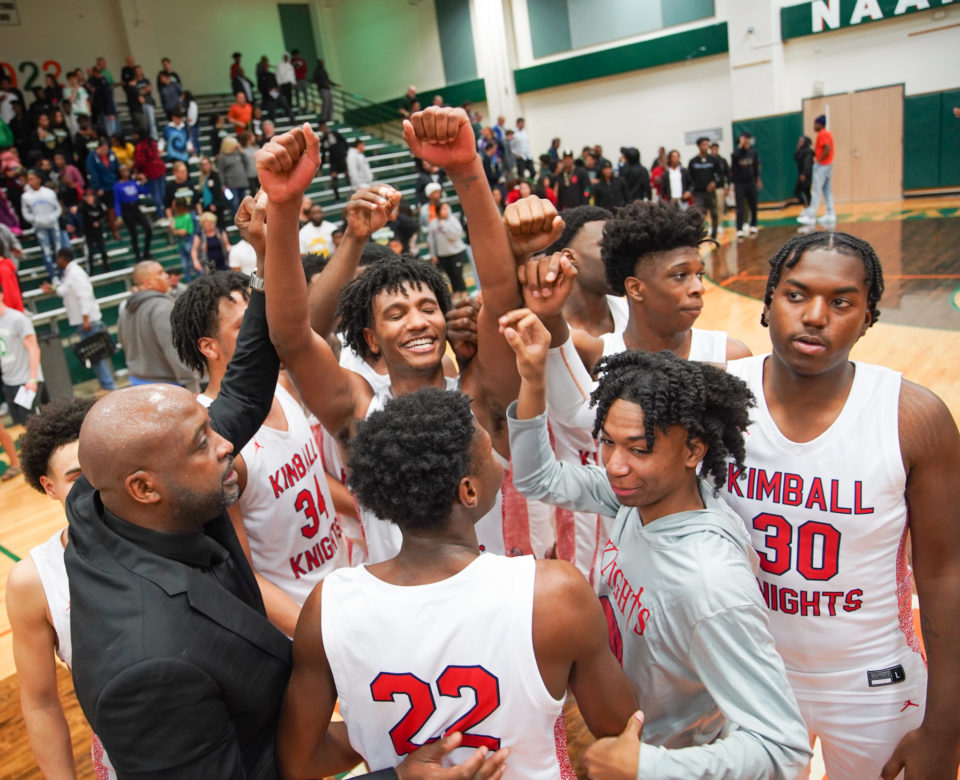 Justin F. Kimball High School. The school is considered home to famous alumni such as former Dallas Maverick Quinton Ross, Packers quarterback Don King, musician Stevie Ray Vaughan and even creator of Barney Sheryl Stamps Leach. The school is also home to one of the biggest basketball powerhouses in the state of Texas.

The Knights have an impressive six state titles to their name, three of which coming since 2011. With the Knights 101-73 victory over previously unbeaten Newman Smith in the third round of the Texas 5A regions 2 & 4 playoffs, they’re well on their way to number seven.

Kimball, now 28-6 on the season, just handed Newman Smith its first loss of the year subsequently ending their season in the process.

Last year, Kimball was in the same position, in the third round of the playoffs against Highland Park, but fell short 52-39.

“It feels great to advance to regionals and do better than we did last season,” Marcus Bonner said.

Kimball since the 1990s has always been a cornerstone of success in Texas basketball. Since the 1990 season, they’ve captured six state titles including consecutive titles in 1996-97 and three titles in four years in 2011,2012 and 2014.

The 2019-2020 Kimball Knights are special in the fact that more so than any team in the Dallas area, they share the ball. They currently have four players that are all averaging more than five assists a game. To go with that, they have five players averaging double figures in points a night.

“Our success comes from getting stops on defense which turns into offense for us,” Bonner said on his teams’ success.

In Tuesday nights thrilling 28 point victory, it was Arterio Morris, DeMarcus Ralston and Marcus Bonner that combined for a total of 63 points. That ended up being just 10 points shy of Newman Smiths’ total for the evening.

Marcus Bonner, a senior on the Knights, is averaging 19 points, six rebounds and five assists on the year for Kimball.

“My personal success comes from competitive nature and just wanting to win.”

Kimball has been incredible all season and has stepped it up even more so in the playoffs. In the three games of the Texas 5A regions, 2 & 4 playoffs the Knights are scoring 85 points a game whilst only letting up a hair more than 60. Thus, defeating their first three opponents by an average of 25 points a night.

Kimball, ultimately though has one goal. To win it all again.

“For us to win it all we just have to stay together as a team and take it one game at a time,” Bonner said.

Kimball is seeking its seventh state title overall. To get there, they first have to get by the 33-3 Mt. Pleasant Tigers, a team that hasn’t lost since mid-January.

By getting over previously undefeated Newman Smith and the third round though, the Kimball Knights have shown that for them, the sky is the limit.

Rockwall vs Highland Park – Game of the Week | Week 1 Movie