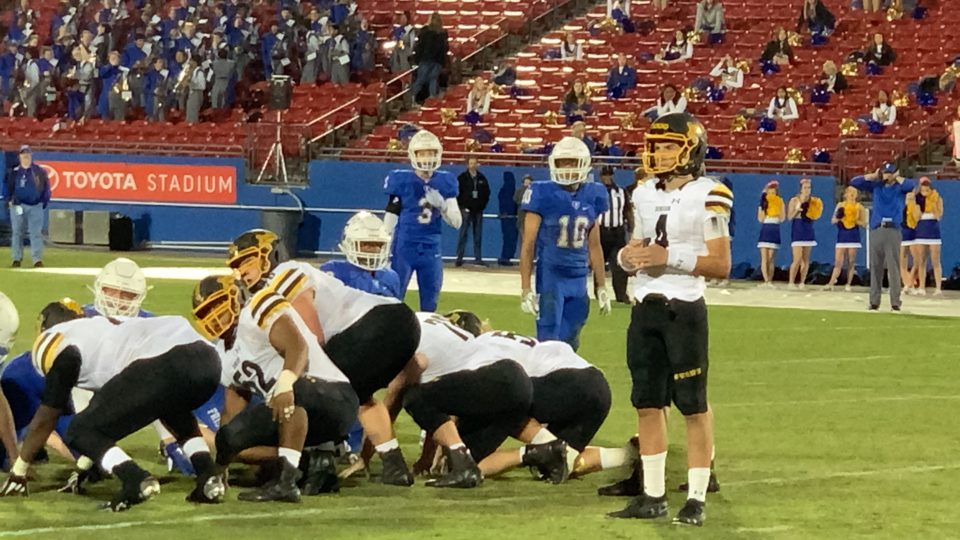 The Denison Yellow Jackets defeated the Frisco Raccoons by a score of 10-7 on Friday evening. The offenses for both teams came into Friday night’s contest averaging over 40 points per game. But it was the defenses that stole the show.

The Yellow Jackets would lead 3-0 at halftime, thanks to a first quarter field goal from Reece Stange. But the Raccoons would start the third quarter with a bang. On the second play of the quarter, Bryson Clemons would take a handoff 77 yards for a touchdown to give Frisco it’s first lead of the night at 7-3. Clemons would end the night with 145 yards and a touchdown on the ground. However, it wouldn’t be enough. Asa Osbourn would add a 2 yard touchdown of his own on the Yellow Jackets’ next offensive series that would prove to be the go ahead score.

It wasn’t a pretty win as the Yellow Jackets finished with only 237 yards of total offense. They also overcame 4 turnovers to win it. But with the defense holding the Raccoons to only 157 yards of total offense, the Yellow Jackets proved that they have what it takes to win an ugly game. This game proved that both teams are more than capable of winning with defense, which is what they’ll need if they want to be successful during a tough postseason stretch. With that said, both teams will need to finish strong in district play the next 3 weeks if they’re going to have a chance.

Next up for both teams will be the Frisco Memorial Warriors. Denison (5-2 overall, 4-1 district) will host the Warriors next Friday at Munson Stadium. Frisco (7-1 overall, 5-1 district) will face them after a bye week on October 31st at Toyota Stadium. Both games are scheduled for a 7PM kickoff.

Game Emulator ROMs Is a crucial Element of Emulating Games

Game Emulator ROMs Is an Important Element of Emulating Games

Methods for the Hot Sexy Bride