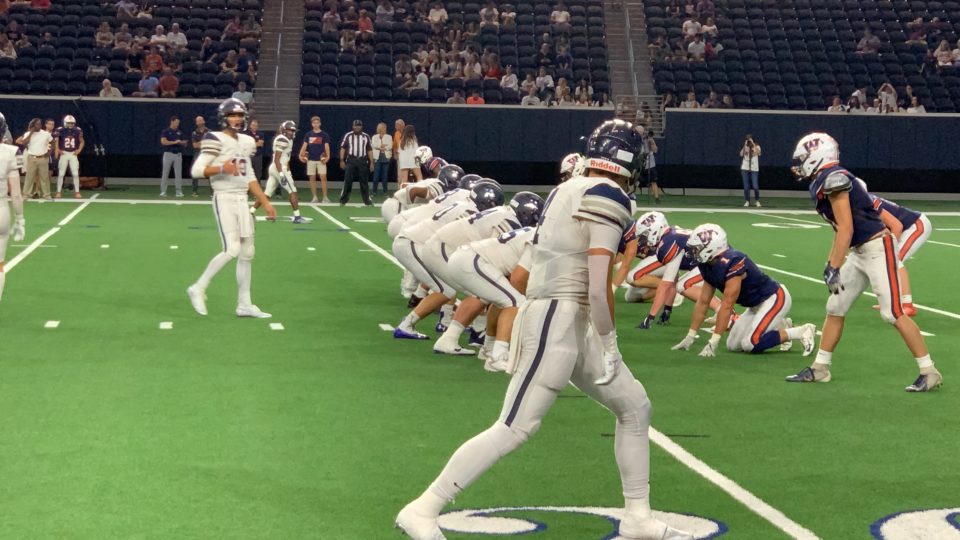 The Frisco Lone Star Rangers ran over the Friso Wakeland Wolverines on Thursday night by a score of 55-14. A big night from quarterback Garret Rangel and Stanford commit Marvin Mims carried the Rangers to a 41 point win that didn’t really seem that close.

The Rangers would build a 28-0 lead in the first quarter, thanks to big plays from Rangel and Mims. They would hook up on the game’s first play for a 60 yard score and come right back on the next drive for a 45 yard score. After an equally strong start from the defense, Rangel would find Mims over the middle for a catch and run of 90 yards to make it 21-0 just halfway through the opening quarter. Running back Jake Bogdon would make it 28-0 before the Wolverines could blink with a 7 yard score of his own.

The Wolverines would find life offensively early in the second quarter but it was short lived. Rangers safety Sherman Steptoe would come up with a big interception to turn it back over to the offense and just 3 plays later, Rangel would throw his 4th touchdown pass of the night to Trace Bruckler. Bogdon would add another score on the ground and a Josh Click field goal would give the Rangers a comfortable 45-0 lead at halftime.

Rangel would end the night with 390 yards on 16 of 21 passing for 5 touchdowns. His fifth touchdown of the night came in the third quarter to Mims, who finished with 8 catches for 261 yards and 4 touchdowns receiving.

The Wolverines would continue to fight, though. They would get a rushing touchdown from Charlie Burkhart late in the third quarter and Peyton Lewis would hook up with Alex Shirley midway through the 4th quarter for their final score. Josh Click would add another field goal late to round out the scoring for the Rangers.

The Wolverines (3-2 overall, 1-1 district) will hope to get back in the win column next Friday as they visit the Little Elm Lobos. The Rangers (5-0 overall, 2-0 district) will look to take another step towards remaining unbeaten when they face the Frisco Independence Knights next Thursday at the Ford Center. Both games are scheduled for a 7PM kickoff.