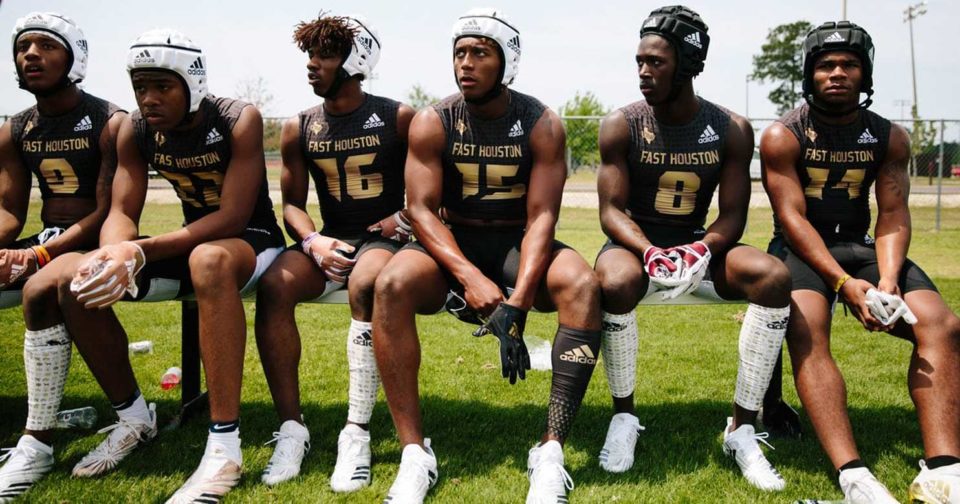 Few athletic waves have swept a nation like 7-on-7 has in America. Stemming from X’s and O’s at a high school practice in the ’90s, the game has blossomed into a football industry.

Having redefined the offseason, 7-on-7 is planting seeds that could possibly reshape the worldwide landscape of American football.

Flenory, CEO of the Pylon event series, is known as a 7-on-7 pioneer. Traveling the country to host regional and national tournaments, Flenory has had significant influence in transitioning the game from a practice tool to a club sport akin to AAU Basketball.

Over the past decade, 1,600 Pylon event attendees have become Division I college football players, 170 of which continuing their careers in the NFL. Pylon will now host 7-on-7 at the Junior Olympics, which had yet to include football in its 50-year history as the largest youth sporting event on the globe.

Having witnessed 7-on-7 become a full-fledged movement, Flenory considers the game to be at the precipice of taking American football’s growing universal interest to the next level.

“I believe the future of 7-on-7 is as a spectator sport in which girls and guys play at the Olympic level,” Flenory said.

A former high school coach, West now trains Houston athletes at events hosted by Gameplan U. West also serves as Director of Player Personnel for FAST 7v7, one of the more notable teams in the Texas 7-on-7 scene, having attracted recruiting interests of Jimbo Fisher and Tom Herman.

“It could become an Olympic sport very soon,” West said. “Demand for American football in foreign countries has grown tremendously.”

When Princeton and Rutgers took the gridiron in 1869, the game Americans call football was born. Despite its 150-year evolution, bolstered by professional teams in 1892 and the forward pass in 1906, American football has remained just that — American.

Lagging behind other sports in international popularity, football has long been a foreign afterthought. Entering the picture is 7-on-7, football’s potential avenue to seven continents.

Long after flags were strapped to the waistlines of military personnel looking for safe means of recreation during World War II, 7-on-7 roared onto the national scene.

An all-passing, noncontact extension of flag football, 7-on-7 was first practiced at Baytown Lee High School in 1994. The aerial attack inspired a new pass-first style of spread offense, first schemed by Andy Reid and dubbed Air Raid by Mike Leach.

The rules are simple: Games are 21 minutes long and played with teams of seven players dressed in skintight appeal with soft-shell headgear. Drives begin 40 yards from the end zone, first down markers are set at the 25 and 10-yard lines, and ball-carriers are downed by touch. While lineups lack linemen, plays begin with designated snappers tossing balls to quarterbacks who have only four seconds to throw to a receiver matched up in coverage.

In time, what was a drill became an industry.

Competing in the Pylon 7on7 National Championship costs each club $1000. In attendance will be teams of one-to-two dozen players, each broken up into one of five age divisions between third grade and high school. Thousands of athletes, each incentivized by college recruitment, will make the trip.

Business is booming for 7-on-7.

Despite the game’s financial evolution, the focus of 7-on-7 has been the same since its inception in Houston — The kids.

“People look at the world from their own perspective and not from that of a kid in South Dallas who has never left home,” Flenory said.

Having begun as an offseason training tool, 7-on-7 has unfolded into national tournaments hosted in overwhelming arenas and life-changing travels experienced by underprivileged athletes.

“Some kids have never flown before,” Flenory said. “A player once asked me if he had to bring towels, pillows, and sheets to a hotel. He had never slept in one.”

Whether or not the benefits of 7-on-7 to youth in America and abroad outweigh those of tackle football is a question that has become increasingly relevant.

“7-on-7 has become a culture of learning,” West said. “It adapts developing athletes to the schemes and speed of modern football.”

“Kids conceptually learn the game of football more efficiently from 7-on-7 than from tackle,” West said. “I see kids in tackle who just play in equipment, not knowing what’s really going on.”

USA Football, the national governing body of the sport and member of the U.S. Olympic Committee, has made headway in international expansion of tackle since 2002.

The 10-year progress of the International Bowl has attracted eight countries over three continents. However, some argue 7-on-7 has intrinsic foreign appeal unrivaled by tackle.

“Look at the U.S. National Team in tackle football,” Flenory said. “American kids were raised with the collision and physicality of tackle. Other teams can’t compete as it’s not in their culture. That’s the differentiator. In 7-on-7, it’s just about going out and having skill. That’s the equalizer.”

Another factor working in 7-on-7’s favor as an international sport isn’t the green found on turfs, but the one in wallets. One constant 7-on-7 advocates believe they can bank on is that money talks.

“7-on-7 doesn’t cost money like tackle football,” West said. “Soccer is the global sport because it doesn’t cost anything. Just give me a ball and I can play. The same can be said for 7-on-7.”

West foresees a future of “rapid international growth in 7-on-7 because it passes tackle football from a cost perspective.”

While any coach would praise players for honing their crafts, some remain skeptical of how bullet-proof training is via 7-on-7. Joe Willis, head football coach at Colleyville Heritage High School, is one of them.

“7-on-7 by itself is not football,” Willis said. “Rather, it’s a developmental tool for skill positions.”

“It can certainly be a positive for both players and programs,” Willis said. “However, if played with wrong instructions and wrong goals in mind it can lead to bad habits and deterioration of development.”

While 7-on-7 is now commonly incorporated into practice regimens by college football programs from coast-to-coast, it is yet to be seen whether the game’s scope can be pushed outside the border. According to Flenory, the movement is already well underway.

“There is exponential growth in Canada,” Flenory said. “In Ottawa alone, one athlete played Division I football every 20 years. Since 7-on-7 began there 10 years ago, three or four D1 kids are produced every year.”

With 50 teams stretching between Vancouver and Toronto, 7-on-7 representatives are turning their attention to nations overseas, where football is already on the rise.

“Football has been rapidly expanding over Europe,” West said. “The NFL has a huge flag football tournament in Europe.”

“Pylon has a team from Japan coming to our national tournament,” Flenory said. “We’re flying to Japan and showing what 7-on-7 is as a concept and as an offseason training tool.”

7-on-7 is building bridges overseas to provide foreigners a cost-effective alternative to football. While it has yet to generate revenue past the high school level, some call 7-on-7 a billion-dollar idea.

An outspoken advocate of 7-on-7, Flenory argues that the game can not only blaze trails as an international platform, but can sell tickets as a professional sport.

“BIG3 has huge turnouts in huge arenas,” Flenory said. “It’s a different game than traditional basketball but looks and feels like what fans are used to.”

“7-on-7 looks exactly like the game you’re used to, only without a line,” Flenory said. “I believe people will be paid to play 7-on-7 within seven years.”

The appeal of 7-on-7 goes far beyond skill development. Media coverage of events places athletes on websites’ prospect rankings and on the map for college football recruitment. However, as the 7-on-7 hype train races forward, college scouts are reluctant to jump aboard according to Willis.

“It’s laughable to think that football will ever be recruited through any game other than football,” Willis said. “The NCAA does not allow college coaches to attend 7-on-7 events nor would any college coach ever admit to recruiting a player off of a 7-on-7 evaluation.”

Disagreement has enveloped 7-on-7.

Its efficiency in skill development is subjective. Its impact on recruiting is debatable. Its rightful place on athletes’ priority lists is controversial. Its advantage over tackle football is arguable. Its path to the pros is unpaved. Its potential overseas is unclear.

West has been on both sides, formerly working inside a high school program and now training athletes from the outside. His verdict: The 7-on-7 wave is not subsiding any time soon.