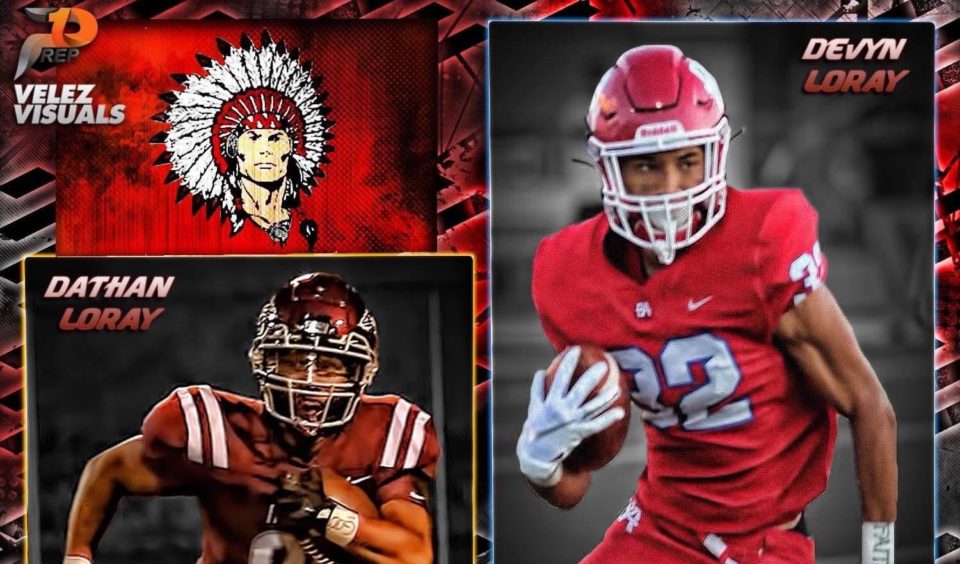 El Paso, Texas — This Friday will see “a family affair” of sorts at Hutchins Stadium. Not only will Ysleta play host to fellow Lower Valley opponent Bel Air, but brothers go toe-to-toe.

Devyn & Dathan Loray, high school seniors who share fathers but have different mothers, have key roles on their respective teams.

We caught up with the brothers ahead of Friday’s game.

Q. (Jesse Tovar) What does playing in this game against your brother mean to you?

Dathan: It means a lot to me knowing that I have to go head to head against my brother

Devyn: It is such a great feeling knowing that my brother is on the field with me and it’s is the most intense competition for me.

Q. Will you reach out during the week or the night before the game?

Dathan: Of course. I will reach out to wish my brother the best of luck and to motivate him to play hard the day of the game.

Devyn: I will definitely reach out to my brother as we do every Friday to wish each other good luck.

Q. Who’s the fastest between the two of you?

Dathan: Devyn is older and we’ve never really raced but I’d say I’m the faster one.

Devyn: I am older and I am faster — Quote that.

Q. In August, Prep1 had a preseason Twitter Poll for RBs. Both of you made it to the final round where over 500 votes were casted. Devyn won by the slightest of margins 51% to 49%. Will the outcome for Friday night’s game be the same?

Dathan: I feel like there will be some back and forth between me and my brother on Friday and I feel like it’s going to be very intense but fun.

Devyn: I definitely plan on having a better game. But of course, I wish my brother an excellent game and a great performance.

Q. Growing up, who was tougher between you two? Who ran the show as brothers?

Dathan: Growing up, Devyn was tougher due to the fact that he was taller and stronger and I used to be very skinny. I’d have to say he ran the show cause he was older and I looked up to him.

Devyn: Without a doubt I was, as we always physically fought I always came up as the strongest.

Q. We’ve titled this interview as “A Family Affair” – are lines being drawn in the sand? Will it be family divided or united?

Dathan: There are no lines being drawn in the sand. It will be family united. On the field it is never anything personal, it is always business.

Devyn: United, as we are motivated to keep our brotherhood alive as we don’t really have our father in our lives.

Q. 4th & Goal, Ysleta ball at the 1-yard-line, time expiring. Dathan meets Devyn at the goal line with the game on the line — Who wins?

Dathan: I’d have to say I’m going to win this one because I’m fast and I have a good amount of weight on me.

Devyn: Like I said, I wish my brother an excellent performance and game. But he’s not crossing that line on me.

Q. Each of you can eventually be drafted and meet up against one another at the 915 Showcase All-Star game in December. You may also be on the same team, sharing a backfield. What would it mean to you two to play alongside each other?

Dathan: It would mean the world to me and I’d take something like that to heart because playing alongside my brother motivates me to play hard and play for him and have his back just as he has mine. Playing along side him would be something phenomenal. It would be so much fun to play on the same team as my brother I feel like we’d give the people a show and we’d both play hard knowing we’re playing together.

Devyn: It would mean the world for me to play alongside my brother as we always talked about being on the same team as the “Loray brothers.” I want nothing more.

Q. Does it make you want to play harder knowing you’re lining up against your brother?

Dathan: Of course it does, even though my brother and I are on different teams I still have to do my part for my team and play ball just like I would against any other opponent and playing hard is something I do no matter what.

Devyn: No it does not, I know what I can do and I play every game like it is my last.

Q: Do you guys share secrets of the game plan with each other or keep it strictly business?

Dathan: It is always strictly business and we just wait to leave it all out on the field come game day.

Devyn: For other games, yes. But for this upcoming game, strictly business.

Dathan: I appreciate the story and I believe this Friday’s game against my brother should be very exciting to watch.

Devyn: I wish Ysleta good luck and I predict a shoot out.

We also asked their coaches about advice they will give their player prior to Friday night’s contest:

Bel Air Head Coach Eric Scogin:  “Devyn and Dathan are close and want each other to be successful and both are happy for each other when the other does well. They both are really good players and leaders of their respective teams and no doubt will try to outdo the other this Friday night. Devyn, like his teammates, plays for each other and will play hard. We also talk about how it’s important how we play, do what we do and that we are getting better each week. These beliefs are what we talk about each week and will be no different this week.”

Ysleta Head Coach Joe Martinez: “ I will tell Dathan that he needs to play with great passion and effort every single play of the game. Anything less than that would be a disservice to his brother, to his team and to the game of football. We have love for Devyn but at 7 PM Friday we play for the Y on our chest and our brothers in the huddle. After the final whistle, we’ll never play BA again so we can root for each other going forward”