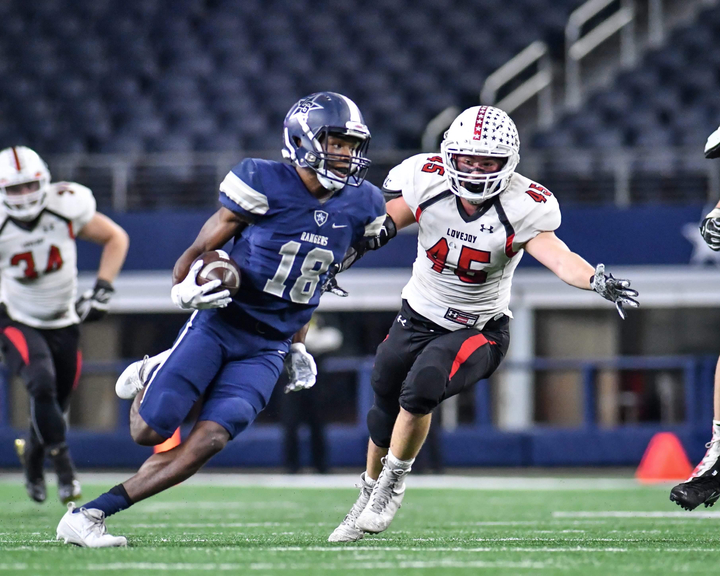 Waco- The Lone Star defense forced six turnovers and led the way for the Rangers 49-21 victory over Lufkin in the area round at McLane Stadium.

Offensively Lone Star (10-2) finished the first half with 8-yards of total offense and no first downs, yet held a 14-7 lead.

Senior running back Darrin Smith ended the first down drought, when broke loose on a 41-yard run with 6:19 remaining in the third quarter. Julian Larry would split two defenders with a touchdown pass to Marvin Mims (7-239, 3TD) that capped off the drive.

to break free for a 41-yard touchdown run at the 10:26 mark of the third quarter, which made up for the sack he took on the previous play.

Lufkin (10-2) put together a methodical offensive drive that was kept alive by a Jahrell Stevens pass to Ja’Lynn Polk on third-and-short.

The Pack would attempt to convert a fourth-and-goal, but the Rangers’ defense forced a turnover-on-downs.

Larry threw a short strike to Mims, who would make a defender miss and race 91-yard to the end zone and extend the Rangers’ lead to 35-14.

Lufkin had no choice but to start taking shots down the field.

Elias Hernandez would make the Pack pay, as the senior DB picked off two passes, including one that set up touchdown drive.

Lone Star will face John Tyler next week with a date and location TBD.