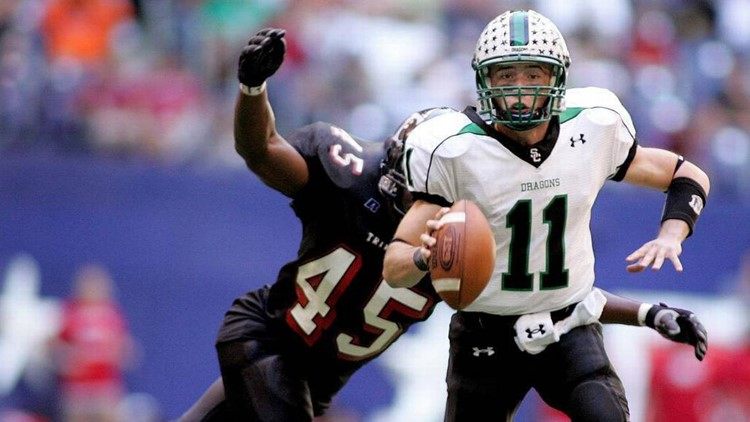 Following a tumultuous offseason, long tenured Southlake Carroll Head coach Hal Wasson resigned amidst scrutiny from the public. For the first time in years, the Dragon legacy was in disarray, and uncertainty began to sink in. The board didn’t know what was next, nor who should take over, until a familiar face arose. On March 23, former Dragon quarterback Riley Dodge, son of state championship winning head coach Todd Dodge, took over as the youngest 11-man head coach in the state at the age of 29.

It’s a classic story of a legend coming home. Dodge was a quarterback at Southlake Carroll at 2004-2007, after sitting two years behind former Alabama quarterback Greg McElroy, Dodge took over as the starter under his father, Todd in 2006. The younger Dodge threw for 4184 yards and 54 touchdowns with 1,119 yards and 13 scores on the ground his junior year capping his senior year with a state title win over Austin Westlake. His father left for North Texas before his senior year and Dodge played his final season under his predecessor Wasson. He finished his high school career with 7,629 yards and 93 touchdowns in two seasons as the starter.

Listed as a four-star prospect, Dodge committed to Texas before deciding to follow his father to North Texas. Injuries and position changes stalled his career, and he transferred to McNeese State in 2010. It wasn’t long before Riley found himself back in the Lone Star State as a graduate assistant at Texas A&M in 2012 then as a quality control quarterback coach at the University of Texas in 2013. After two years at the Division I level, Dodge took over as the offensive coordinator at Flower Mound Marcus turning a had-nosed offense into the spread no-huddle offense the Dodge’s have become known for.

His story came full circle on March 23, when he was introduced as the head coach at his alma mater.

So far, his rookie season could not be going any better.

Despite the success of old, Dodge came in at a rough time. It’s been seven years since the Dragons have hoisted a title. Hal Wasson had been the head coach since 2007 and was forced to resign in disgrace after rumors surrounding his treatment of players and coaches. To rally a team to success, much less an undefeated season, after that, has been no small feat.

Sitting at 13-0, the Dragons have dominated all season. Their closest margin of victory has been four points vs Odessa Permian and Denton Guyer, outliers in a season of blowouts. They’ve leaned on an offense that runs through do-it-all back TJ McDanieland the QB play of Will Bowers. The offense he runs is very similar to his father’s and hope has been restored in Dragon Nation. Defensively, they’ve relied on 2020 standout DB RJ Mickensand a stout defensive front to shut down opponents.

The Dragons have pummeled their way through the first three rounds, with dominating wins against Coppell, Desoto and most recently, Euless Trinity.

“He’s come in with that no-fear mentality” said Mickens. “Win. Win at all costs”

Now, Dodge and his Dragons have their sites set on a huge quarterfinal matchup with unbeaten Duncanville on Saturday. Led by star ATHs Ja’Quinden Jackson and Marquez Beason, the Panthers prove a tough test for Carroll.

Win or lose, Coach Riley Dodgehas Southlake Carroll back on the path of greatness.