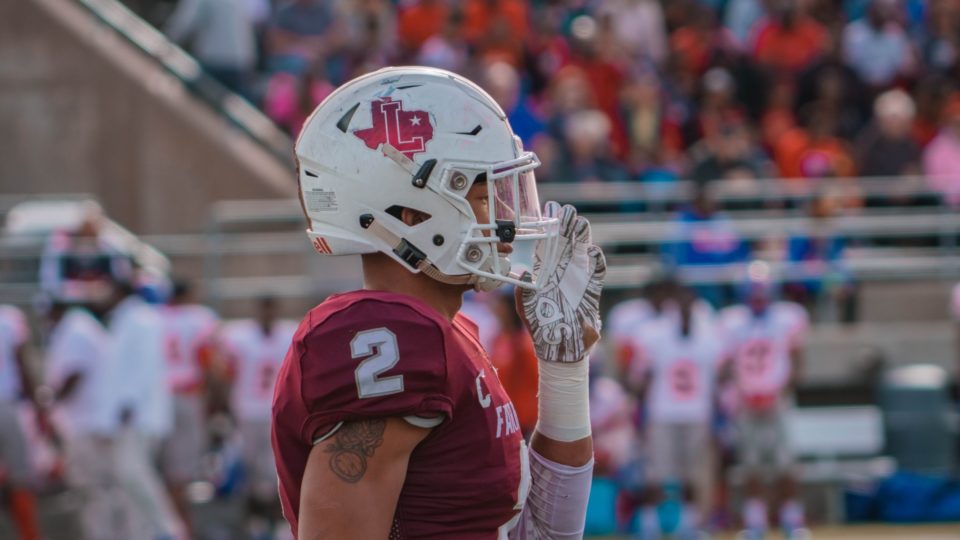 It was pretty at times and it was ugly at times, it was exactly what you’d expect from the Battle of the Axe

It was a defensive struggle early, as both teams exchanged possessions before any points were scored. Finally, Lewisville opened up the scoring as Daylen Clark zipped past the Marcus defense for a 55-yard touchdown for a 7-0 score at the end of the ﬁrst quarter

Early in the second quarter, LSU commit Marcel Brooks helped put the Marauders on the board with an impressive forced fumble, returned by a touchdown by Ethan Barr. The missed ensuing PAT allowed Lewisville to hold on to their lead 7-6.

The defensive struggle continued, and Marcus’ offense failed to get much going. The Farmers, found another hole, this time a 10-yard touchdown catch by Guerrin Saintill.

Lewisville opened the half looking to build off their momentum when disaster struck. The Farmers fumbled the snap in Marcus territory, giving the Marauders a chance to tie the game up.

Marcus’ made halftime adjustments offensively to try and get some points on the board. Lining up at quarterback, Brooks ran it in himself from 59-yards out to bring Marcus within one point 14-13.

The Farmers couldn’t hold on to the football, fumbling once again on the ensuing drive. This time, Marcus couldn’t capitalize, missing a critical ﬁeld goal that would come back to bite and at the end of the third, it was still 14-13.

The defensive struggle carried over into the ﬁnal quarter. Marcus forced yet another fumble, their ﬁfth of the night, but continued to come up short offensively. The Marauders’ did everything they could defensively, but ultimately a Farmers’ ﬁeld goal put the game away with 4:10 remaining, 17-13.

An impressive Lewisville win was marred as both teams nearly came to blows following the game.

The win meant more than a rivalry, as Marcus needed the win to clinch a playoff spot. Their season ends at 5-5, but 3-4 in district play.

For Lewisville, they move on to Keller in the ﬁrst round of the playoffs. Keller sits at 8-2 on the season and should test the Farmers.n