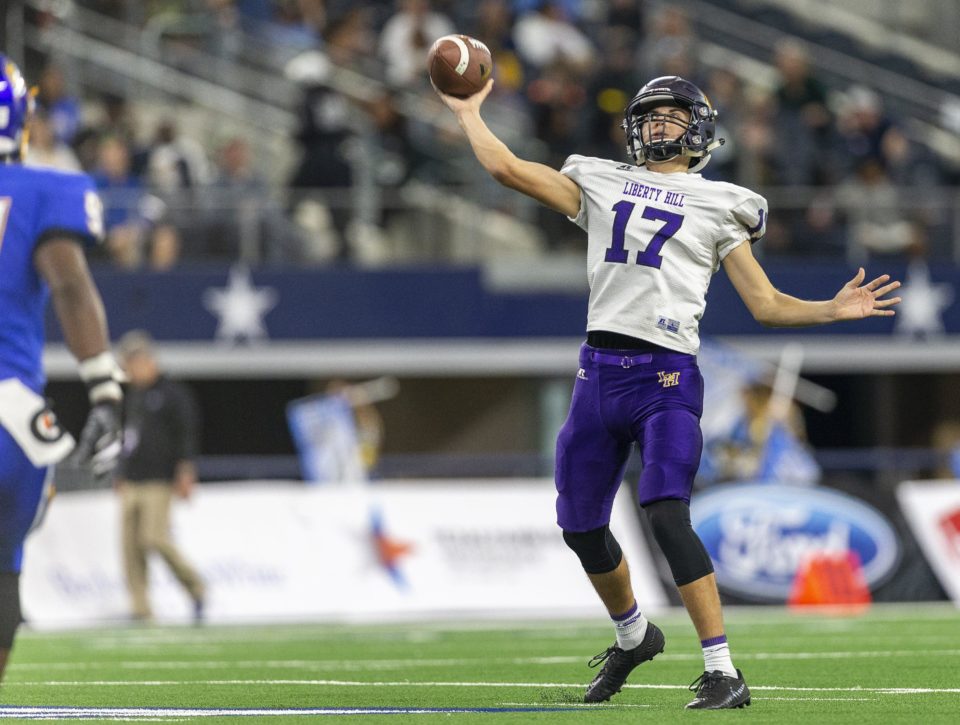 After leading by just 2 points at the end of the first quarter, the Panthers scored 63 unanswered points to seal a district title and playoff spot

Taylor looked to keep it close early as they traded blows with the Panthers.

The Panthers took an early lead as running back Shane Gonzalez carried Liberty Hill to back-to-back touchdowns for an early 14-0 score.

Taylor wasn’t backing down and with 2:49 left in the first quarter, QB Cole Harms ran it himself to bring the Ducks within eight. Then, with just seconds remaining in the quarter, Harms found JoJo Torres and Taylor was back in the game 14-12.

Little did they know, it was the last score they’d have the rest of the night.

Liberty Hill opened the second quarter with a downpour of points. Shane Gonzalez ran in his third score of the night and the Panthers tacked on two more touchdowns for a halftime score of 35-12.

The second half was more of the same but it didn’t come without some thrillers. Panthers RB Kyle Harrison broke four tackles and reversed the field midway through the third quarter for a 99-yard score that put the game away 42-12.

However, Liberty Hill wasn’t going to leave any doubt, tacking on four more touchdowns for a final score of 77-12.

With the victory, Liberty Hill seals a district title and a playoff spot. They now sit at 7-1 and 4-0 in district play. With a game against Canyon Lake looming, the Panthers will look to keep their undefeated district record intact. However with a playoff spot guaranteed, look for them to give their starters some must-needed rest.

For Taylor, they now sit at 3-6 and 1-3 in district play. They’re all but eliminated from the playoffs, but they’ll have a chance to end their season on a high note with a game against 2-7 Burnet. If the Ducks can rebound from tonight’s tough loss, they could still potentially land in the playoffs.