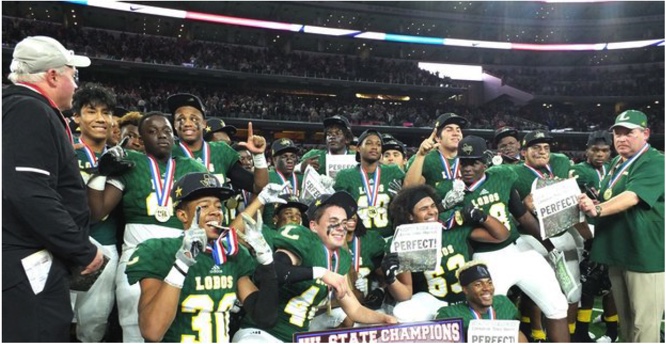 Longview hadn’t won a state title in 81 years. On Saturday evening, the John King-led Lobos broke the streak. In an absolute classic, Longview came back to defeat the West Brook Bruins 35-34.

West Brook came out firing early, and quickly silenced the large Lobo crowd. Though their first drive ended in a punt, the statement was made that the Lobos weren’t going to run away with the game. Longview on the other hand, found paydirt their first drive, pounding it in for a 6-0 lead.

Within minutes, Elia connected with Deonte Simpson, a connection that would find success all night, for a long touchdown to put the Bruins ahead 7-6. The floodgates were open and they weren’t closing soon.

Longview didn’t hesitate with their response, as King found his favorite receiver, Kamden Perry for a 77-yard touchdown to retake the lead 13-7. At the end of the first quarter, the Lobos had their eyes on their first state title in 81 years.

The Bruins had a lot to say about that, as Elia carried it himself for a 22-yard touchdown within the first 30 seconds of the second quarter. From there, the Bruins turned it up, firing on all cylinders scoring yet again as Holland ran untouched for a 35-yard score, increasing their lead to eight points, 21-13.

The Lobos were just a step off, as their next drive went all the way into the Bruin red zone, before Jarek Brooks stripped the ball to preserve their lead. The poor field position killed the ensuing Bruins drive and the Lobos let out a collective sigh of relief as the game was still within reach. King brought the Lobos back, hitting Kaden Kearbey for a 40-yard touchdown to keep the lead within reach, 21-20.

West Brook’s offense couldn’t be stopped, responding in just 29 seconds as a 45 yard Elia run opened up the opportunity for the Elia-Simpson connection hit again, this time from 25 yards for a 28-20 score at halftime.

The Lobos came out of the half needed a score to get back in the game, but after a long drive, the fourth down conversion fell short giving West Brook the ball with a short field to work. After the Lobos D came up with the stop. King bet on himself, driving down the field, before running it in from 25 yards out to bring the Lobos within two 28-26.

The Bruins weren’t comfortable with the Lobos being within striking distance and the fourth quarter opened, Holland punched it in from four yards out for a 34-26 score with 11:37 left in the game. King made a huge throw to put the Lobos inside the Bruin 20 with a chance to tie it up. With three chances from inside the ten yard line, Longview failed to score, settleing for a field goal to cut the deficit to five points 34-29.

The Bruins offense was sliding and punted for just the third time all game. Longview responded quickly, off an Anderson touchdown and led for the first time since the first quarter. Up 35-34 with four minutes left in the game, West Brook needed a response.

The Bruins got desperate and as the pressure mounted, West Brook crumbled. Just needing to run out the clock, the Lobos were state champions for the first time in 81 years.d