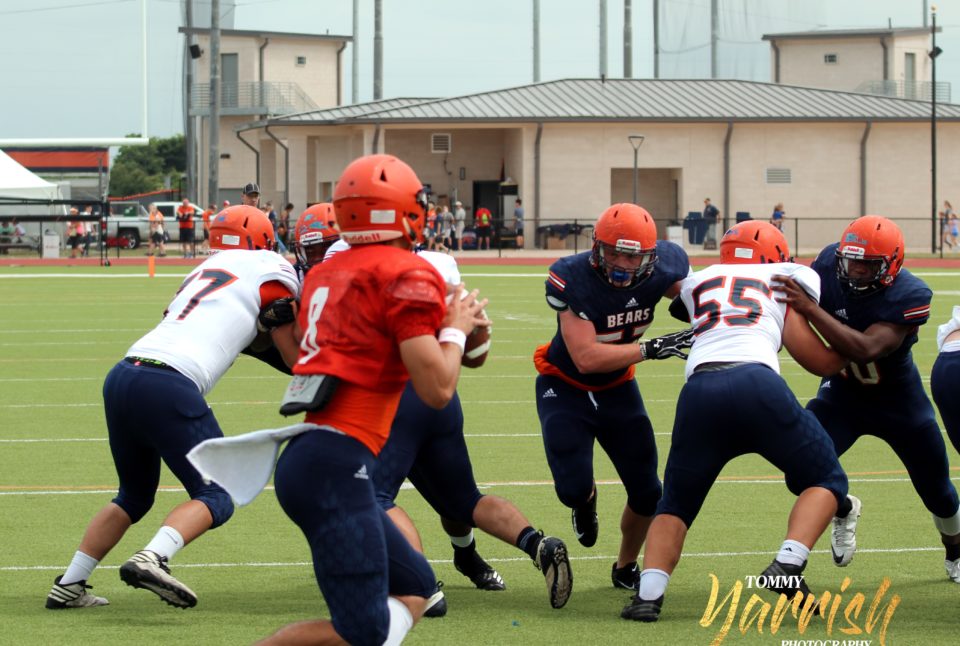 After a 2-14 debut in their inaugural varsity season, the Bridgeland Bears are ready to prove that they can be the next elite team to come out of 14-6A. Saturday’s spring game shed light on the young teams potential, especially on the defensive end.

Defensive coordinator Dale Williams knew there was work to do after a disappointing first year. The defense seemed to be able to start games, but wouldn’t be able to play all the way through, with opposing offenses breaking away in the second half. They didn’t get many reps during the spring game, but they balled out when they were on the field.

2021 cornerback Kam Amao led the secondary, and arguably had the hardest assignment in guarding Dylan Goffney, but held his ground and was hyped up all afternoon, batting away passes in straight lockdown coverage. Their other elite sophomore defensive back, Bryce McMorris, was out with an avulsion fracture, but he says he’ll be back on May 30th.

Up front, 2021 linebackers Roderick Gray and Charlie Moore held it down against the run game, making tackles left and right, not letting freshman running back Mason Culton get anywhere. Sophomores Mine Imarah and Garrett Hurley were constantly putting pressure on Nicholson, and were able to get to him and Culton in the backfield. While Nicholson and Culton did break away a few times, the battle of the trenches leaned in favor of the defense.

With freshman A team coming off an undefeated district championship season (again,) two players really stood out, both coming from the offensive end. Connor Weigman was the first, as the quarterback led the second offensive group and had some nice throws even with a tough defense. He was able to control himself in the pocket under pressure, and got away a couple of times as well when necessary.

The second would be running back Mason Culton. He blended in well with last year’s varsity starters, despite the strong defense. He filled that hole particularly well, splitting through the defense efficiently and turning upfield several times. He’ll be an asset working with sophomore Gavan Kapsar.

Speaking of Kaspar, he’s been trying a new position as of late, and took the field on the defensive side as a safety. The plan is to have him be a solid player on both sides of the ball, using his athleticism to its full potential.

While their performance wasn’t the best in the actual spring game, the rest of the spring season proved that the offense is still as dangerous as it was last year. Sophomore quarterback Finn Nicholson led the district in passing yards (2480) and sophomore receiver Dylan Goffney also led the district with receiving yards (993.)

Nicholson showed off his strong arm and precise accuracy, as he threw several lobs right into a small hole in a net about 40 yards out. When he wasn’t throwing to the net he was hitting receivers like sophomore Dylan Goffney, who’s gotten five offers since the season ended. Forming the rest of the strong receiving core are sophomores Atrevion Hunter and Tyler Stott, plus the big tight end Dylan Crippen who had a few nice catches throughout the spring season.

Everyone is sick and tired of hearing “they’re too young” or “they’re not experienced enough” when it comes to Bridgeland. The Bears are loaded with talent, and can pose a problem to opposing defenses in 14-6A. It still won’t be easy, but with seniors rolling in, expect Bridgeland to be on the rise.