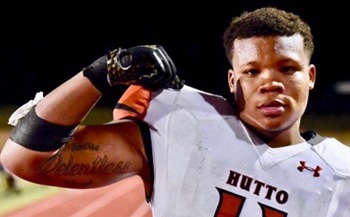 Everything is bigger in Texas. There are 3,240 high schools in the state alone.

With so many schools, it’s nearly impossible to keep an eye on all of them and keep track of which teams are doing what. Sometimes when there’s a superb program with great history and culture they can kind of slip under the radar if they’re not a big-name school. That’s what makes the Hutto Hippos so unique.

To people who are new to Texas, their response would promptly be “what’s a Hutto?” Hutto, Texas is a 5A school located about 22 miles northeast of Austin.

They hold two state titles in their history one in 1999 in volleyball with the other being a more recent 2016 tennis state championship. One of their more impressive feats, however, is their consistency on the football field.

There have been many players who have made their mark in Hutto, most notably, wide receiver Jeremy Kerley who even had a stint in the NFL for eight seasons. Last season star quarterback, Chase Griffin who threw for over 50 touchdowns whilst only having five interceptions is now at UCLA looking to make his mark there.

One new player for the Hippos who is looking to make a name for himself is star senior defender Al-Amir Ward.

Al-Amir Ward started playing football at five years old, even winning defensive MVP for flag football. He’s continued that success which has grown into a dominant 2019 season for himself and the Hippos.

Through seven games this season Ward has 57 tackles including a team-leading 10 for a loss. Multiple sacks and a team-leading three forced fumbles and it’s easy to see how Ward is one of the premier talents on this Hippos squad.

Ward and the Hippos defense has led the team to an impressive 6-1 start to the 2019 season. The defense is allowing on average only a hair more than 17 points per game while the offense has held up their end as well scoring over five touchdowns a game on average.

When asked about his team’s expectations, Ward responded with belief in his team.

“Our goal at Hutto is definitely to bring home a state championship,” Ward said. “We are taking it one game at a time and our coaches take pride in doing it with class!”

The Hutto coaching staff is led by head coach and district athletic director Brad LaPlante. LaPlante served as the offensive coordinator from 2014-2018 before becoming the head coach of the Hippos last season. Prior to that, he was the head football coach at Northwest Mississippi Community College, an esteemed program with a heavy pipeline to the NFL including Jacksonville Jaguars starting quarterback Gardner Minshew II.

It’s not all perfect in Hippo nation however as Hutto suffered its first and only loss of the season on October 16th at Cedar Park by a score of 20-16.

“ We are just continuing to be us. I have a great team and everyone is working on improving at their position week in and week out. Our head coach has a statement called ‘BCD’ which means we focus on ourselves as a team. Our Bounce back is simple we focus on us and get better, healthier, and make other teams conform to us!”

Ward and the Hippos responded in a big way as this past friday at home they destroyed Pflugerville 54-7.

The defense was smothering only allowing Pflugerville to complete five passes for 38 yards while also only letting up 2.8 yards per rush.

Ward had an impressive day totaling six tackles, one for a loss and even had a forced fumble.

Ward contributes a lot to his on-field success citing Nuclear Athletics, Texas Fury 7v7, and his coaches among other things.

“A bunch of things goes into my performance. One would be my offseason workouts and grind (with @nuclearathletes & Texas Fury 7v7 Team) as well as I don’t shy away from the competition. I want to go against the best! My coaches have made me better by letting me be a three-headed snake and play LB/DE/DT and display that I can do a lot to be an asset to my team and it’s motivating!  I pride myself on being a good tackler, traditional strength and wrapping a guy up! My teammates make me successful too! They do a great job in their roles and assignments so it’s easier for me to go to work in mine!”

Ward has multiple offers from Northern Colorado, Northwestern Oklahoma State, and Prairie View A&M to name a few and when looking into the future he said “ Of course I want to graduate and continue to make big plays at the next level! Honestly, I wanna play where they recognize my strength at being able to play on the line as a pass rusher and at linebacker for certain plays! And somewhere that wants me!”

Ward’s enthusiasm about Hutto, football, and life is unmatched and infectious. Ward is the heartbeat of this Hippo squad and if they want to reach the playoff success that they haven’t had in years past it’s going to be up to Ward and the rest of the hippos to get them there.

That’s the beautiful thing about Texas football. You never know what programs and what players are out there in this massive state. No matter where you go you can always find a great program with a great story to tell. The Hutto Hippos have built a great culture for their football program and they hope 2019 can be the year they breakthrough.