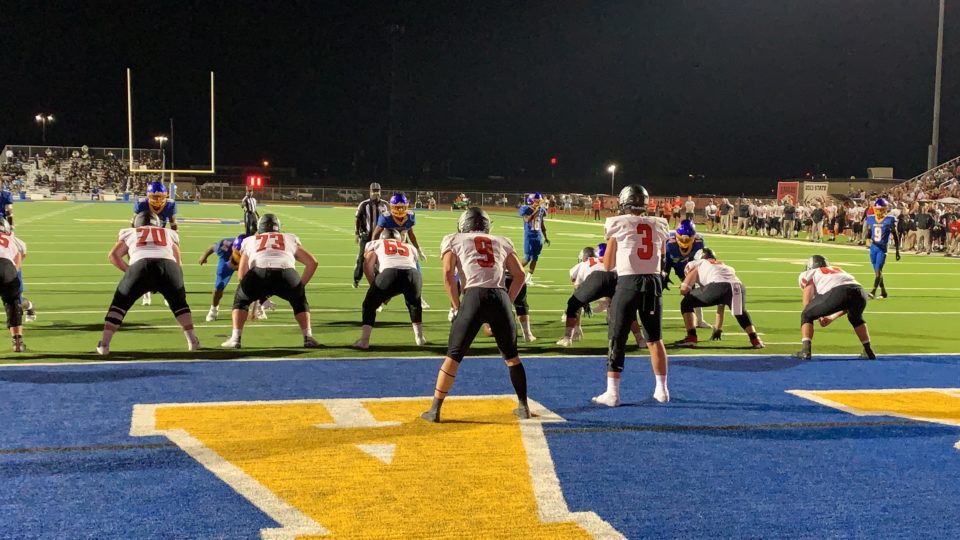 Senior quarterback Bo Hogeboom threw for 220 yards and 4 touchdown passes as the Argyle Eagles defeated the Waco La Vega Pirates, 49-35. The Eagles were in control for much of the game, leading 42-21 at halftime. But a strong second half push by the Pirates made things interesting.

All 4 of Hogeboom’s touchdown passes would come in the first half. The first would go to tight end Jasper Lott just 2 minutes into the game for 16 yards. Running back Tito Byce would make it 14-0 with a 24 yard scoring run after a strong defensive stand that would put the Pirates on their heels early. That’s when the Pirates would cut into the Eagles lead with an 83 yard score from Landry Kinne to Elisha Cummings on a screen pass. But before the Pirates could blink, they found themselves down 28-7 after Hogeboom would find Alex Gonzalez for a 39 yard touchdown and Byce would score from a yard out to end the first quarter.

Hogeboom would add his final 2 touchdown passes in the second quarter. He would find Lott for another score and on 4th and 12, he would deliver a strike to Cole Kirkpatrick for 28 yards. While the Eagles established themselves early, there would be signs of life for La Vega in the first half. A big interception by Ara Rauls III, followed by a 69 yard touchdown pass from Landry Kinne to DeMicco Chambliss would allow the Pirates to hang around. Kinne would also hook up with Malachi Wright on a pitch and catch for 70 yards to keep things interesting.

The Pirates would come out in the second half and go on a 14-0 run. Jar’Quae Walton would race 64 yards for a score to begin the third quarter. Kinne would later find Sol’Dreveon Degrate on a fade route with 11:53 left in the game to cut the Eagle lead down to 42-35. However, the Pirate offense would go cold from there. The Eagles would then play keep away and put the ball in the hands of Byce, as he would drain the clock and ice the game with big carry after big carry. Byce, who finished with 211 rushing yards, would round out the scoring with his third touchdown run on the Eagles final drive.

Friday night’s match up was the third time in 12 months that Argyle and La Vega faced off. They met twice in 2018 with Argyle winning the first match up in week 2, 31-29. The second match up would take place in the 4A Division 1 playoffs, where La Vega would claim a 31-14 victory. It’s possible that the two could meet again. But both have to take care of business before they cross paths for round 4.