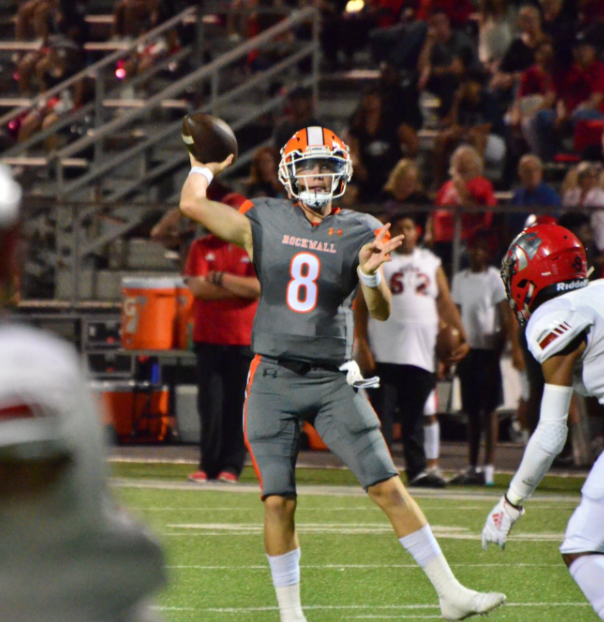 If you were bored by the Tampa Bay Buccaneers and the Chicago Bears on Thursday Night, Texas Football had you covered. On Thursday night, two of the best quarterbacks in all of Texas duked it out in a battle of 6A supremacy.

Quinn Ewers, the number one player in the nation for the class of 2022, and Southlake Carroll took on Braedyn Locke and Rockwall.

Simply put, these two are the best of the best at the quarterback position for the class of 2022. Locke though had more questions coming in than Ewers. Last season, Locke had the best security blanket in all of football with a five-star wide receiver and now Ohio State Buckeye, Jaxon Smith-Njigba.

Well, if Thursday was any indication, Locke is his own man. With him and Rockwall’s 21-point comeback against Carroll, Locke thrust himself in the spotlight as one of the best players in the country and someone who should receive just as much exposure as Ewers or any of the other top prospects in his class.

“Well, our mentality never wavered. Our offense can put points on the board in a hurry and we knew we were a few plays away from being right where we wanted to be. Getting that win was incredible. It was such an unreal experience and such an amazing win for Coach Brooks. I couldn’t be happier for every single guy in the locker room!” Locke said.

Ewers and Carroll scored on each of their first pour possession to give themselves a 28-7 lead. What happened after? A Rockwall 37-14 swing.

Ewers played exceptionally well, he completed 63% of his passes for 326 yards with three touchdowns, two interceptions, and a touchdown on the ground as well.

It was Locke though who outdueled the best player in the nation. Locke completed 70% of his passes for 352 yards, three touchdowns, no interceptions, and also added another touchdown on the ground.

“Well Southlake is a very good football team and we knew that coming in. It was important to take care of the football and take what they gave us. It felt like we did a great job of staying within ourselves and executing on third and fourth down. Money downs will win you games!” Locke added.

One of the big differences in the Rockwall offense is the departure of Jaxon Smith-Njigba. The elite wide receiver last season caught 109 passes for 2,132 yards and a ridiculous 34 touchdowns. Locke believes that even though the loss of Smith-Njigba is massive, it actually makes it harder on defenses.

“Well, you obviously can’t replace a guy like Jaxon. But I think it has made it harder on defenses to defend us. We are so much more unpredictable and we’ve got five guys on the field at all times that can create explosive plays for us,” Locke said.

Rockwall unlike last year has started 3-0 as well. Last year at this point they were 2-1. Locke and Rockwall last season though had a magical run all the way to the 6A D1 state semifinals. They even shocked Allen in the second round inside AT&T Stadium to the tune of a 60-59 upset of the state powerhouse.

This year Locke is confident this team can be even better.

“There is no ceiling for this team. I truly believe that. We have a long way to go but we are playing great football right now. We are so balanced on offense making us difficult to defend, and our defense is flying around making plays, and special teams have come up big for us all year,” Locke said.

Ultimately though the winner of this season’s state championship is going to be the team that stays the healthiest. With COVID-19 being the biggest x-factor at play here, it’s up to the players to stay safe when they’re not on the field. Locke and company have been doing the best they can to make sure they stay safe.

“We have done a great job taken precautions to protect ourselves. Coaches have done such a great job enforcing that just as much as anything else. It is so important that we stay on our guard because while it is an amazing time in the state of Texas, we know it can be taken away in the blink of an eye,” Locke said.

If you’re going to put your trust in anyone though, trust in Braedyn Locke. Through three weeks he’s taken his already amazing resume and improved on it drastically. No one has played better arguably than Braedyn Locke.

On Thursday, he put all of Texas on notice. Locke and Rockwall are here to stay