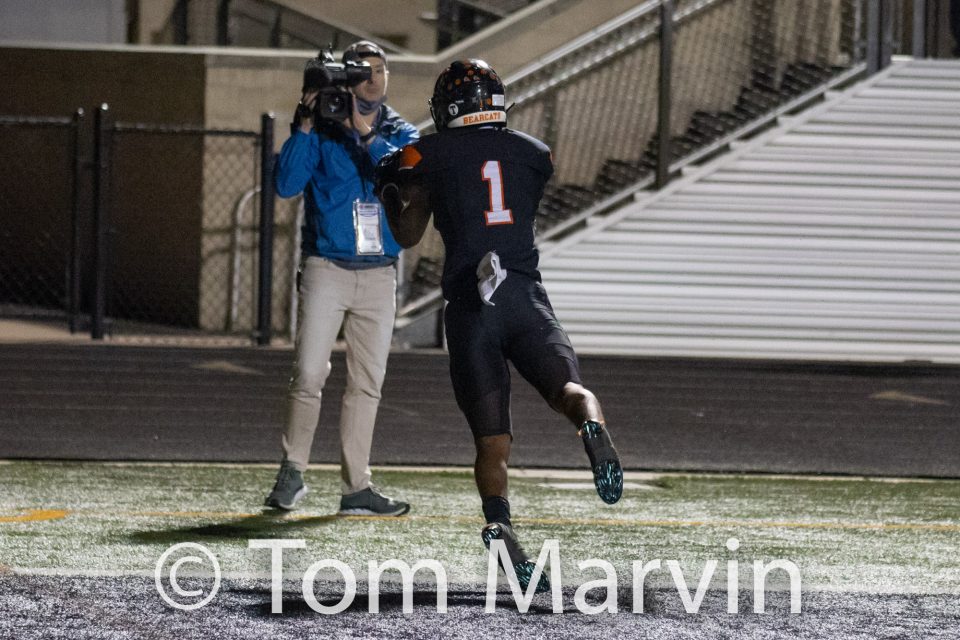 JoJo Earle’s foot-dragging third-down catch in the corner of the end zone helped Aledo come from behind for a 34-32 victory over Frisco Lone Star Friday at Bearcat Stadium.

Earle scored on a fourth down reception on the last play of the third quarter as the Bearcats and the Rangers traded the lead several times in the game.

“I don’t even know how I caught the ball it happened so fast. I wasn’t expecting Brant to throw the ball to me,” Earle said of the game-winning catch. “He threw it all the way out there and I just dove for it and managed to keep my feet in.” Earle did manage to drag his toe until he had possession of the ball (see the photo above).

However, there was still more than five minutes to play and the Lone Star offense had been moving the ball all night. Aledo managed to force Lone Star to turn the ball over on downs at midfield. Earle then helped Aledo run out the clock with a 17-yard run and a couple of more runs for a second first down.

Demarco Roberts led Aledo with 130 yards on 15 carries and three touchdowns, all in the first half. He did not play in the second half because of an injury. The injury forced Aledo to use Earle more as a quarterback in the Wildcat formation as well as a running back. He finished the game with 20 carries. In addition to the touchdown receptions, Earle also had a big two-point conversion run after his 7-yard TD reception at the end of the third quarter.

Aledo sophomore quarterback Brand Hayden completed 9 of 14 passes for 120 yards and the two touchdowns to Earle. However, Lone Star managed to come up with three interceptions in the first half and scored after each turnover.

Running back Jaden Nixon lead the Lone Star offense, rushing 20 times for 114 yard and three touchdowns. He scored twice on runs of 1 yards and once on a 55-yard run.

To view a complete gallery of photos from the game, click here.