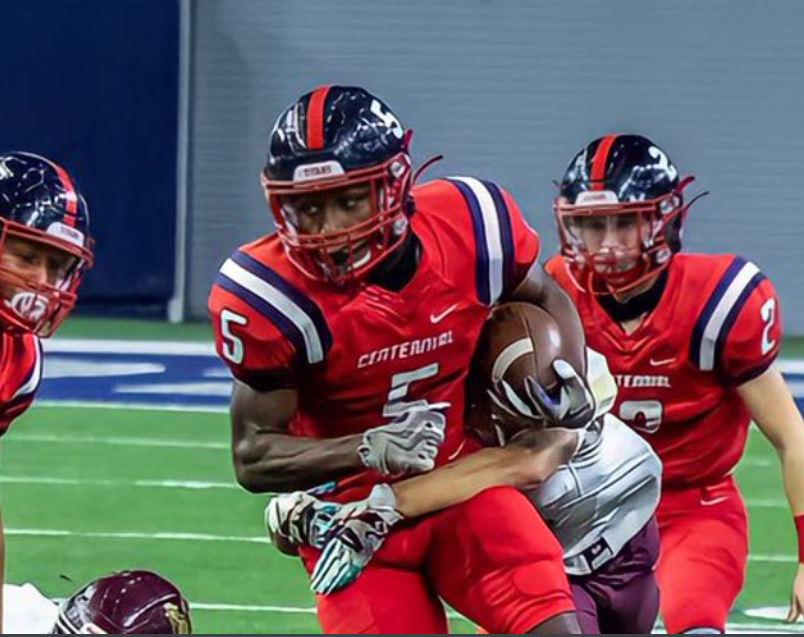 Frisco Reedy had a golden opportunity on Saturday when they met in-town rival, Centennial, at The Star in Frisco. If Reedy won, they would’ve clinched a playoff berth. Something that seemed like a stretch at the beginning of the year considering Independence, Lone Star, and Ryan among others, were in their district. Nonetheless, they entered The Star with a 6-2 record and a shot at being able to take it easy in their final game.

Despite AJ Padgett throwing for three touchdowns and over 400 yards, it was Centennial and their track team of a backfield that ran away with things in the second half. Centennial can’t make any playoff noise this year, but they did just potentially ruin a rival team’s chances.

“It was very exciting and took all of us to do it. We put in the work every day to get better and this win motivates us even more,” running back Harry Stewart said. “The experience was a feeling that is pretty hard to explain, just pure joy.”

“Getting the win felt amazing,” quarterback Grayson Dayries added. “So much work is put in by the coaches and players on our team. Coaches staying up late, spending countless hours scheming and watching the film. Players watching film and going 100% at practice every day. All of the stuff behind the scenes make the win that much more enjoyable.”

Reedy came out guns-a-blazing as Padgett and the passing offense was firing on all cylinders. Wide recevier, Kaleb Smith, was burning the Centennial secondary early as he beat them twice, one for a touchdown, the other being called back for unsportsmanlike conduct.

Reedy entered halftime with a 24-14 lead and even led 24-7 at one point. They could’ve entered the locker room with a 27-14 lead but their last-second field goal attempt was blocked. That would come back to bite them later on.

Centennial would outscore Reedy 21-9 in the second half.

What was the key to Centennial’s success? Their three-headed monster of a backfield. Quarterback Grayson Dayries, along with running backs Harry Stewart and Jackson Marshall is a nightmare for opposing defenses to plan for. They may be the fastest trio in the DFW area.

Those three account for over 99.1% of the Centennial rushing attack on the season. On Saturday it was on full display. Those three inside of The Star ran all over the usually stout Reedy defense to the tune of 274 yards. Centennial going into the game on average were rushing for 177 yards a game.

Freshman Harry Stewart led the way with 154 yards and two touchdowns on just nine carries. On the season, he has 723 yards and seven touchdowns on just 60 carries, good enough for 12.1 yards a carry. It was Stewart’s 52-yard touchdown run in the third quarter that gave Centennial a one-point lead entering the final quarter.

“Just working every day and getting better at my game and doing the best for the team. My main goal is to do what I can for this team to the best of my ability,” Stewart said on his success.

No comeback is complete however without good quarterback play and Centennial got that out of Grayson Dayries. The senior signal-caller completed just nine of his 22 passes for 137 yards with one touchdown and one interception. However, it was his ability to run the football, that stole the show and won the game. He ran the ball 11 times for 88 yards with two touchdowns.

With less than six minutes left, Dayries kept the ball and took it 80-yards to the house to give Centennial a 35-27 lead. A touchdown that would ultimately be the decisive won. However, Reedy was 6-2 for a reason, these Lions have a lot of fight.

Padgett hit Smith for 60-yards on the ensuing drive and down went Reedy. Padgett would later hit Austin Beyer from a couple of yards out to cut the lead to just two points with less than two minutes left. Reedy then inserted Zion Washington in the game at quarterback for the potential two-point attempt to tie the game.

Washington took the snap, kept it, and ran to the right only to be met by a sea of Centennial defenders. The upset was officially on.

However, Centennial still needed one big final first-down to finally finish it. There were still 100 seconds on the clock and Reedy had two timeouts left. After being stopped twice, Centennial was down to one more play. If they were to be stopped again, they would be giving the ball back to Reedy with about a minute left. If they could just get the first-down though it would be game over.

Dayries took the snap and took the ball himself around the tackle nine yards for a first down and a Centennial upset win.

“I thank god for the opportunity to play and for the success we had. This week we had players on the offense and defensive line come back from injury and from being in quarantine from the previous week. This along with lots of preparation, key plays and schemes made by our coaches, and vital adjustments made during the game allowed us to be successful,” Dayries said on his success.

Again, even with this win, Centennial’s season in terms of the post-season is over. However, this potential ruins Reedy’s season as they absolutely need a victory over The Colony this upcoming Friday to get in.

Nonetheless, this win shows how good Centennial is, and can be in the future especially with guys like Harry Stewart who is just a freshman.

Don’t just look at this team’s record when you judge them. Centennial despite being just 3-6 is averaging upwards of 30 points per game. Against Heritage, they went off for 68. Even though they’re not always coming away with the win this team is chock-full of talent, and they showed that on Saturday.

“I am focused on getting better and staying humble. I do anything for the team’s success and will keep working on my craft to get better,” Stewart said.

Something you should know about Dayries and this team?