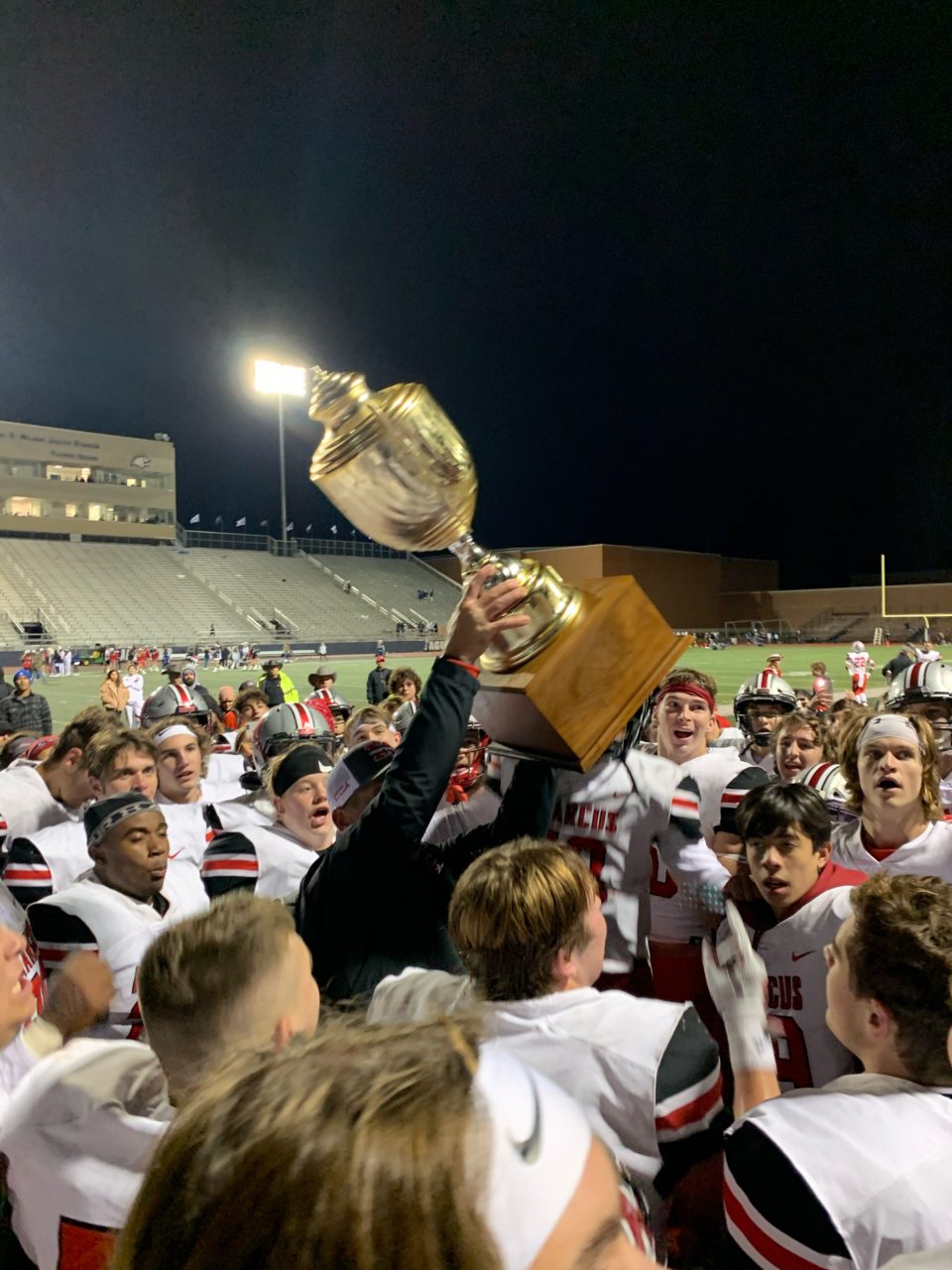 The Marauders are playoffs bound after reclaiming the mound over the Flower Mound Jaguars  34-31. They are the first team in the 6-6A district to secure a playoff spot.

“You know it’s been great, it’s been four or five years [since]Marcus has been in the playoffs,” junior quarterback Garrett Nussmeier said.

Both teams exchanged punts on their first drives of the game. However, the Marauders went on a seven play drive that ended with Nussmeier finding junior wide receiver J. Michael Sturdivant for a 29 yard touchdown. This made the score 7-0 with around five minutes to go in the first quarter.

The Jaguars responded with their own ten play drive that ended in a touchdown. This tied up the game 7-7 with less than three minutes left in the first.

The Marauders then went on a seven play drive, which ended in a nine yard score by senior running back Ty’son Edwards to to put the Marauders in the lead 14-7 and ended the first.

To start the second quarter, Flower Mound got the ball but had to punt it away. Four plays later Nussmeier found Sturdivant for another touchdown, putting the Marauders up 21-7 with around ten minutes left in the second.

“We took what they gave us,” head coach Kevin Atkinson said. “We felt like they missed aligned a bit defensively and thought we could take advantage of it, and we did that.”

On the kickoff after the touchdown, the Jaguars fumbled the ball, which the Marauders were able to recover. Immediately after, Collin Sutherland scored a one play drive and Nussmeier found senior tight end  on the trick play. This put the Marauders up 27-7 with a missed point after touchdown with exactly 10 minutes left in the second.

The Jaguars then got the ball and drove it down the field, which ended in a field goal. This made the score 27-10 with around seven minutes to go in the second.

The Marauders ended up punting the ball and the Jaguars went on a six play drive that ended in rushing touchdown, cutting the lead to 27-17 with around four minutes to go in the second.

“For me it’s just resetting and trusting my line,” Nussmeier said. “They got the sack which caused a fumble down here and I just kept my composure.”

Flower Mound then took advantage of a fumble by Nussmeier and later scored another touchdown, making the score 27-24 going into halftime.

“They just played well and they made some plays and took advantage of us with our fumble deep in our own territory,” Atkinson said. “On the muffed punt, they took advantage of that, so we gave them 14 points right off the bat.”

The third quarter was a scoreless one, with both teams having to punt the ball away and a blocked field goal by the Jaguars.

After their interception in the third quarter, the Jaguars went on a long 11 play scoring drive early in the fourth quarter. This allowed them to take  the lead 31-27 with about 11 minutes left in the game.

Both teams punted on their next drives and the Marauders got the ball with 2:24 left in the fourth. They had an eight play scoring drive, which ended in junior linebacker and running back Tyler Gainey scoring a touchdown to put the Marauders back in the lead 34-31 with 54 seconds left in the game.

“I was just saying, ‘let’s milk this clock and go down and score, and we did,” Atkinson said.

Flower Mound then moved the ball all the way to the Marauders’ 28 yard line, but a big sack by senior Max Walstad and no timeouts left for the Jaguars meant time would expire before they could try the field goal.

“I’m just excited for our program and these kids who worked so hard over these last couple of years,” Atkinson said. “For them to see the fruits of their labor is really neat.”