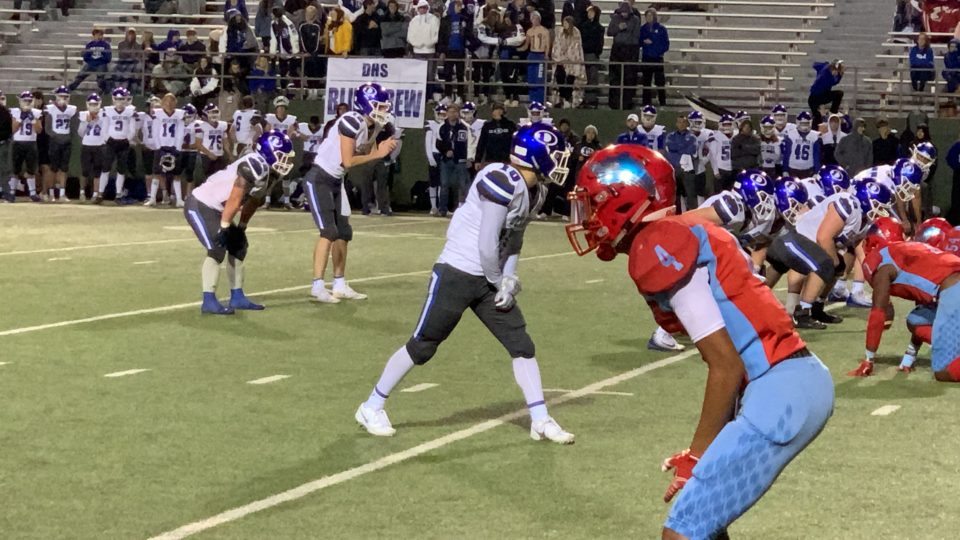 Entire towns shut down and jam-packed into a stadium like clothes in a suitcase. There’s no pressure quite like that atmosphere.

Win and your team can become a beacon of hope and heroes to your town. Lose? And watch everyone you know become affected by it. The latter, however, is no problem for the Decatur Eagles as with a massive victory over rival Springtown they move to 7-0 on the season and have put all of 4A on notice.

Decatur is a small town of 6,042 residents located approximately 30 miles west of Denton. There are schools in Texas with larger enrollments than the town of Decatur has people.

Decatur, however, has found its own slither of success when it comes to 4A athletics. Their volleyball and Boys cross country teams are both reigning state champions in their respective sport. They also hold multiple state titles in girls’ cross country and boys golf as well. One title though that has alluded the Eagles is the one trophy in the one sport that dominates all of Texas, football.

After years of being up and down in 4A Decatur might be in their best position yet to make a run at a state title.

From 2010-2018 Decatur posted a 66-39 record, good enough for a win 63% of the time they took the field. The one hump they could seamlessly never get over though was the playoffs.

In 2011 Decatur had a perfect 10-0 regular season before losing by 10 in the very first round to Kennedale.

In 2014 and 2015 Decatur combined to go 16-4 in the regular season but in both years they lost to Stephenville in the first round.

The very next year they got over the Stephenville hump but fell in a shootout in the second round to Levelland.

For years Decatur had been consistently good in the regular season but always seemed to stumble when it mattered the most. That narrative finally changed last season.

Decatur limped into the playoffs with a 4-6 record. In most sports, a below .500 record means you’re nowhere near to the playoffs, but Decatur got in and made the most of their opportunity.

They went on a tear winning four games in a row each by more than one possession. They made it all the way to the state semifinals before finally falling to eventual state champion, La Vega.

This was a turning point for the program, years after not being able to make a run when it mattered the most Decatur finally broke through. Ever since that run, all they’ve done is win.

Since last year’s playoffs, Decatur is 11-1, including a 7-0 mark this season. The Decatur Eagles are a stock that everyone needs to buy immediately.

Decatur through their first six games had been on fire averaging more than 42 points a game, with their lowest total of the year being 35. They’ve been on a warpath of late writing the wrongs of last year’s regular-season this season.

Last year in the opener Decatur struggled against Kennedale losing 55-7. This season? A 35-21 win.

Last season against Midlothian Heritage resulted in a 56-21 loss. Not this year as Decatur came up on the winning side 41-28.

Last season Graham beat them in Decatur by 24, this year they went to Graham and beat them by 14.

One of their biggest revenge games though was this past weekend against the Springtown Porcupines. Last season against the Porcupines Decatur suffered one of their most embarrassing losses of the year losing 75-35.

This year’s matchup saw an undefeated Springtown team coming into Decatur looking to show the Eagles that history can repeat itself.

Decatur jumped out to a 17-0 lead in the first quarter. That was quickly made irrelevant though as Springtown came out in the second quarter to score 17 unanswered themselves to enter the half tied.

Decatur kept that trend going as they shutout the Porcupines 13-0 in the 3rd quarter to go into the 4th quarter with a 30-17 lead. Multiple rushing touchdowns by Springtown, however, made it 31-30 with around three minutes to go.

No problem whatsoever for the Eagles as they marched down the field and capped off their impressive drive with a rushing touchdown of their own to secure the 38-31 victory and move to 7-0 on the year.

One of the driving forces behind the success of Decatur is Senior starting quarterback, Roman Fuller.

Roman last season as a junior completed just over 65% of his passes for 4,652 yards and 45 touchdowns.

What’s most impressive about Fuller was his performances in Decatur’s’ playoff run last season.

In those five games, Fuller posted a 4-1 record whilst completing 117 of his 176 passes for 1,438 yards with 14 touchdowns to only two interceptions. When the bright lights are on Fuller, he shines even brighter.

He’s continued that success into this season as through the first seven games Fuller has increased his completion percentage to just below 70% with 2,147 yards and 21 touchdowns to just two interceptions.

What makes Fuller unique is that in today’s day and age the dual-threat quarterback is becoming much more common. Fuller, however, brings football back to the old school days as he’s a pocket passer through and through always looking for an open receiver rather than taking off himself.

When asked who he most resembles most Fuller said “I like to believe my playstyle is similar to Tom Brady’s (obviously nowhere near that caliber.) I don’t scramble out of the pocket a lot and I can get it out quick.”

One of Fuller’s inspirations to play football is his dad, and head football coach of Decatur Mike Fuller.

“My dad has been a head coach for where I lived since I was born and I’ve always loved the game.”

Fuller has high expectations for his Eagles squad as he said “Our goal is to continue winning until we have a ring on our finger.” when asked about this season’s expectations.

Small towns have a home-like feel. You feel as if everyone is part of your family. That couldn’t ring truer when talking to Fuller about why Decatur is 7-0.

“The reason we are 7-0 is that we play as a team, I’ve never seen a group of guys closer than we are.”

Fuller understands the importance of dethroning a team like Springtown. “It was awesome to see my team have a game-winning drive and put away a state powerhouse.”

Very little has stopped the Senior quarterback so far. The future Tulsa Golden Hurricane, when asked about the future, said: “I know I am going to work my butt off so I can play on Saturdays as soon as possible.”

There’s no doubt that when it’s Roman Fullers’ time to shine, he’ll make everyone a believer through his talent alone.

For now, though Decatur is focused on winning it all one game at a time. They finish this season with consecutive road games against middling Mineral Wells and Burkburnett respectively before having another epic regular-season showdown at home against undefeated Gainesville.

Decatur is ready to make a splash into the 4A party and ready to show the rest of Texas just what they’re all about. With many people predicting the likes of La Vega to repeat or others like Argyle or Carthage to run the table, 2019 might just be the year of the Eagles of Decatur.

Choosing the best Latina Women of all ages For Marital life