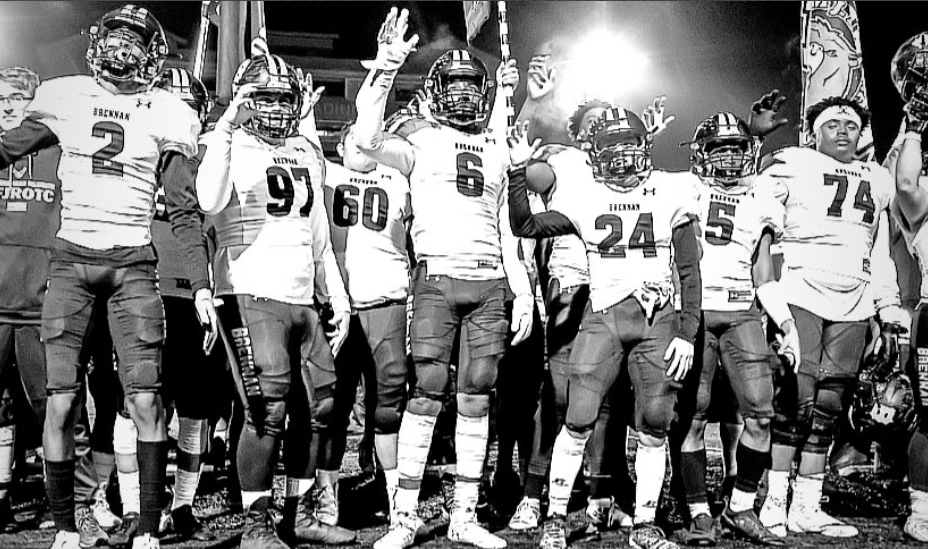 One of the most underappreciated teams of last year was the Brennan Bears from San Antonio. Brennan posted an impressive 9-3 record,  only losing to three other playoff teams including state champion Westlake. Their defense only let up around 14 points a game on average.

The thing is, Brennan has been doing this for a while now. They opened their doors in 2010. After a winless first season, they haven’t had a losing season since. They even made it all the way to the state championship in 2013, where they received their only loss of the year to Guyer.

Brennan has been one of the best programs this decade.

One reason for their dominant success particular on defense is standout safety, Donovan Dreighton.

Dreighton is a safety that everyone should have on their radar starting now. The soon to be senior is a 6’1 185-pound wrecking ball who last year was all over the field. He compiled 63 tackles, nine for a loss, two sacks, a fumble recovery, and two interceptions. Dreighton at all times is all over the field.

“First and foremost my faith in God I believe has played a major part in my personal growth as a football player and a young man,” Dreighton said. “Also, my drive to be an inspiration to others is also what drives me the most.”

Dreighton most recently got listed as a three-star recruit via 247Sports. As of now, he’s listed as the 110th ranked safety in the 2021 class and the 226th best player in the state of Texas.

“It’s exciting, honestly. It’s something I knew was possible for me to accomplish and it’s really an honor. But of course, it doesn’t stop here,” Dreighton said.

Dreighton has been racking up offers lately receiving 11 of them since the end of February. Abilene Christian, Houston Baptist, Air Force, Army, UIW, Lamar Sam Houston State, Montana State, Navy, New Mexico and most recently Louisiana-Monroe have all made their services available to the talented San Antonio safety.

“Recruitment has been well, it’s always a blessing to be in the position I am so I can’t complain about anything I’m receiving,” Dreighton said. “I knew it was going to be stressful when it started up so I’m taking it to the chin and weighing my options out, being patient.”

Before Dreighton moves up to the next level though he has one more year at Brennan. One more opportunity to finally climb the mountaintop and reach the apex for this amazing program.

“Our goal like anyone else’s is to make it to that state championship game, but as of right now we’re focused on winning out our season and getting a district title. We have a few young guys who are ready to work and do what it takes so I’m excited.”

Dreighton is extremely underrated when it comes to Texas prospects. He’s an absolute hound on the football field. Someone who Brennan fans should be very very excited about this upcoming season. Wherever he ends up, that team and program, is getting a winner.

“I’m a character, a leader, and someone who wants to see everyone eat. I have so much love for this game that I feel I have to be the blueprint of what a player should be,” Dreighton said.