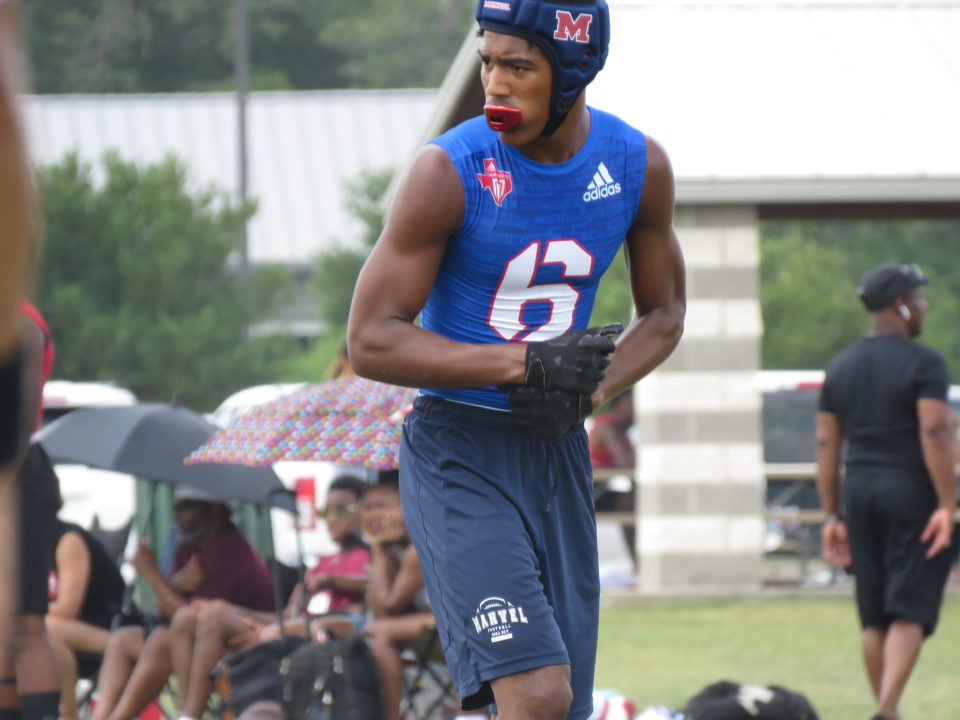 This past weekend at the 2019 Texas 7on7 State Championships, the Manvel Mavericks had a really strong showing, finishing first in their pool and going all the way to the Elite 8 in bracket play, before losing to the eventual state champions, A&M Consolidated.

There were tons of good takeaways from their games and it looks like the future is bright for the Mavericks.

Starting with the quarterback play,  senior Tucker Yarbrough will take over the offense next year and he has big shoes to fill. The past four Manvel Quarterbacks have gone on to play Division 1 football (Deriq King- Houston, Kyle Trask- Florida, Kason Martin- North Texas and Josh Coltrin- Tulane).

Yarbrough is up for the challenge though, as his play spoke for itself during 7on7. He threw for 38 touchdowns with only 2 interceptions and looked very accurate and precise all weekend.

“I feel like this weekend was a learning experience for all of us. We found ourselves as a team and we had a bunch of big plays. We made ourselves and our coaches confidence in us rise up,” said Yarbrough. His recruiting should heat up this fall as more colleges start to notice his talents.

Manvel looks like it has a promising, young wide receiver core to build off of. Star senior wide receiver, Jalen Paxton was missing from College Station due to a previous commitment. Even with Paxton’s absence the WR core looked very sharp and athletic.

Paxton has had his fair share of D1 looks, including offers from schools such as Wisconsin, Indiana, SMU, UNLV, Utah State and Texas State.

Dease is an underrated receiver from the 2020 class and should get a lot more looks come this fall. Dease was able to grow as a leader this past weekend,

“Being able to be the guy everyone looked up too and fed off of at some tough parts in our path felt amazing. It’s just a great feeling knowing your teammates are depending on you, then coming through for them.”

Walthall, Johnkins, Williams and McLean are all getting their first chance to shine this year and should run with their opportunities.

Senior cornerback Vinson Brown, had a game sealing interception against Eastwood in Pool Play and made some athletic stops throughout the weekend.

“I had an amazing time out here at the tourney, this was my third year out here and  it never disappoints. I went to war with my team and left it all out on the field. We never gave up and we fought until we couldn’t anymore. The offense did well, the defense did well, overall it was just a great competition,” said Brown.

Sophomore Justin Medlock is a big imposing force on the Maverick defense and should make an impact right away this fall. Like Brown, he also caught a game altering interception in Pool Play.

Another bright spot on the Maverick defense was Sophomore JaQai Neal, JaQai is a game changer. He makes big plays constantly and is always around the ball. A game winning interception, from JaQai, in the ATH SQT, took the Mavs to the State Tournament. Lookout for these key players to make impacts on the 2019 season.

Although the Texas 7on7 State Tournament revolves around football, it also acts as a great team bonding and builds brotherhoods to last a lifetime.

“I feel like we most definitely got closer this weekend. Mostly because we are a young team so for the young guys to get time to spend time with the older guys was just what we needed to come together more. And this weekend kinda showed people that we bend but don’t break,” said Neal.

All in all, Manvel looks like they are returning to their winning ways. With an explosive offense and consistent defense, look out for the Mavs to make a deep run come December.

Manvel is more determined than ever to return to the bright lights of Cowboys Stadium, including Vinson Brown who had this to say about his team,

“This was just a slight glimpse of what’s to come. I would do anything for my guys, I love them. Now it’s time to go to war and put on the pads, Hoka Hey.”’

2019 Texas 7on7 State Championship Hype Up