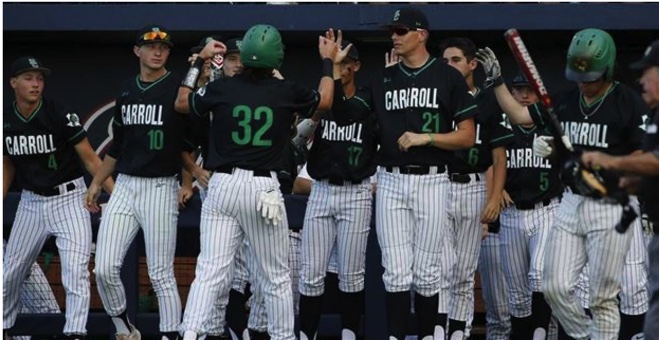 The final sporting event of the UIL 2017-18 school year is upon us as the top four baseball teams in conferences 1A-6A will arrive in Round Rock and Austin for the state championships from June 6-9.

For 24 teams, the goal of a state title jumps one step closer as action will kick off on Wednesday with 1A, 2A, and 4A.

1A-Semifinals on Wednesday, Championship on Thursday at 9 a.m. (Dell Diamond)

1A will get the action going at 9 a.m. as Abbott and Fayetteville will face off before Slocum and New Home round out the 1A semifinals immediately after game one of the weekend.

Slocum is the favorite going into the weekend after outscoring playoff opponents 87-10 in just six games.

Despite starting the season 1-5, the Abbott Panthers rattled off 20 of their next 24 to reach the state tournament for the second consecutive year after just one prior appearance in 1985.

The Fayetteville Lions are no stranger to this stage as they will be making their seventh state tournament appearance and their third since 2012. The Lions will be carried by their senior ace Jacob Schley who will head to Round Rock with a team leading seven wins on the mound and just one loss.

Despite a shaky regular season, the New Home Leopards will be making their first state tournament appearance in school history after beating Nazareth, Earth Springlake, and Gail Borden County on their road to Round Rock. They are led by senior P/OF Keagan Grantham who owns a .485 batting average along with a 7-3 record on the mound.

2A features a pool of teams that are all expected to make some noise in Round Rock as Muenster, Woden, Dallardsville Big Sandy, and New Deal all come in sporting single digit losses on the season.

The defending champion Muenster Hornets come in as the favorite as they will ride three- sport sophomore star Danny Luttmer behind his .306 batting average along with senior pitcher/outfielder Stetson McGrew who is 11-0 on the mound on the year while honing in a .352 average at the plate.

They will face off against the Woden Eagles who will make their first state tournament appearance after winning 15 of their last 16 games in the regular season and 9 of 11 in the playoffs. They will ride on the arm of one of the better pitchers in 2A, Drew Shifflet, after his 12-1 senior campaign.

Led by head coach Jason Ybarra, the New Deal Lions will make their fifth appearance in the state tournament after an impressive 30-4 season. Of the teams in 2A, New Deal has arguably the deepest pitching staff as Jett Whitfield, Layton Reed, Brandon Coronado, and Marino Ramirez all come in with 6+ wins on the year.

Dallardsville Big Sandy will come in riding an 11-game winning streak that dates all the way back to the regular season as the Wildcats will be making back-to-back appearances in Round Rock after their first appearance in school history in 2017. Junior Brandon Hendrix will come in with an 11-0 record on the mound and an impressive .482 batting average as he will look to secure the Wildcats’ first state championship in school history.

3A-Semifinals on Friday, Championship on Saturday at 9 a.m. (Dell Diamond)

In 3A, Georgetown Gateway and Clifton will face off on Friday at 9.m. with Beckville and Brock following directly after.

No clear favorite jumps out at the naked eye as all three teams come in with 30+ wins and six losses or less. Georgetown Gateway comes in with the best record of the four at 34-3 as junior pitcher Cole Johnsonhas led them on the mound with a 13-2 record along with freshman hero Noah Krieger who has an 8-0 record on the season.

They will face off against the Clifton Cubs who will make their first state tournament appearance after winning four grueling sets of three-game series in the playoffs. The Cubs will send eight seniors to the diamond on Friday in search of their first state title.

After a pair of tough three-game series with Edgewood and White Oak, Beckville will make their third state tournament appearance after a 34-4 season. They are led by senior pitchers Trey Lindsay and Zeke Collins who have gone 10-2 and 9-1 respectively on the mound this season.

Brock comes into Round Rock for the fifth time in school history after going 8-1 in the playoffs. They are led by junior Jase Lopez who has batted .424 this season while going 10-0 on the mound.

4A-Semifinals on Wednesday, Championship on Thursday at 6:30 p.m. (UFCU Disch Falk in Austin)

While the majority of state tournaments will take place in Round Rock, 4A will get underway just down I-35 on the campus of UT-Austin.

The clear favorite is Argyle as they come in with the only undefeated record in all conferences at 35-0. Opponents of the Eagles haven’t even had a chance as Argyle has outscored playoff opponents 68-10 en route to their third state tournament appearance.

Jasper will attempt to take down the Eagles in the semifinal game as they come in with two pitchers with 10+ wins. In their eighth state tournament appearance, the Bulldogs will send nine seniors to Austin in search of the title.

Godley will make their first state tournament appearance after dropping just one game in the regular season and playoffs each with both being by two runs or less. The Wildcats are led by senior Brett Bown as he will come in with a 12-1 record on the mound and a .488 average at the plate.

Sweeney will make their third state tournament appearance after coming back to win back-to-back games against Fredericksburg in the regional final. The Bulldogs will be carried by junior ace Caden Homniak and his 11-1 record on the year.

5A-Semifinals on Thursday, Championship on Saturday at 12 p.m. (Dell Diamond)

5A is one of the more predictable conferences as Corpus Christi Veterans Memorial comes in as the overwhelming favorite to take home the crown. However, Forney, Northwest Eaton, and Humble Kingwood Park all come in on hot stretches looking to take down the giant.

CC Veterans Memorial comes in with a 33-6 record and an seven-game winning streak after walking through their playoff opponents rather easily. Jo Jo Villareal, the #50 player in the 2019 class according to MaxPreps, leads the Eagles with his 13-0 record on the mound.

However, the Eagles will get a taste of a solid pitcher as Forney will most likely send Mason Englert to the mound just two days after he was selected in the fourth-round in the MLB Draft by the Texas Rangers.

In the other semifinal, Northwest Eaton and Humble Kingwood Park will both make their first state tournament appearances. Eaton is led by a pair of senior pitchers with 11-2 records: Riley Taylor and Jacob Seals. Kingwood Park comes in after back-to-back three-game series victories against Georgetown and Tomball Memorial.

6A-Semifinals on Friday, Championship on Saturday at 4 p.m. (Dell Diamond)

6A has seen incredible parity throughout the playoffs as favorites Lake Travis, McAllen, Rockwall-Heath, and Round Rock all suffered early exits.

San Antonio Reagan comes in as the favorite after knocking off heavyweights such as Lake Travis and San Antonio Churchill en route to their third state tournament appearance.

The Rattlers will face off against the 2015 champions, Cypress Ranch, who come in off of the heels of two tough three-game series against Cy Fair and Atascocita.

In the other matchup, The Woodlands come in on a hot stretch after making it out of arguably the toughest district in Texas in district 12-6A and making it all the way to Round Rock. The Highlanders have knocked off heavyweights from the jump after beating Rockwall in three games in round one and sweeping Klein and Round Rock in rounds four and five respectively.

They will face off against an equally hot Southlake Carroll team who is fresh off of a Region I championship sweep of Flower Mound Marcus in the first high school baseball games ever played at Globe Life Park. The Dragons are led by senior pitcher Nicco Cole who has gone 12-0 on the season.

A Day at Legacy the School of Sport Sciences