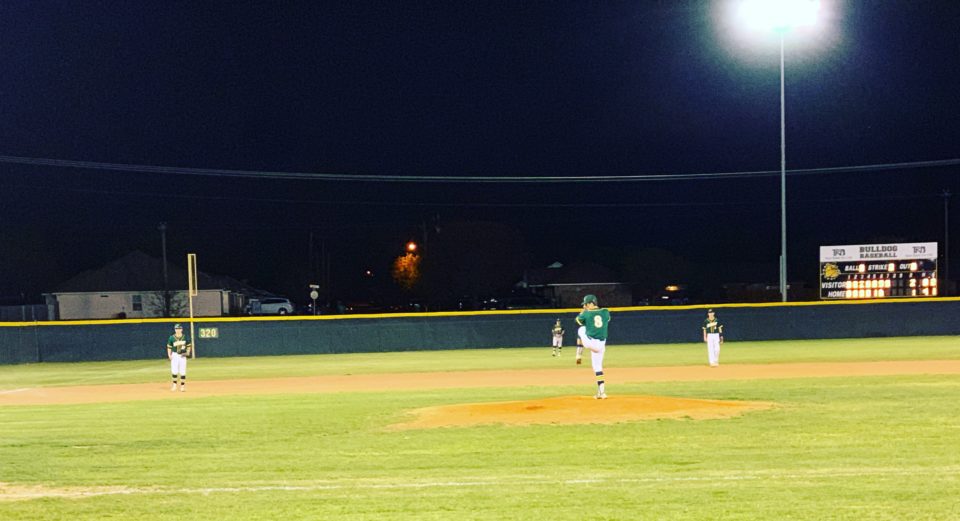 McGregor- Down by one in the bottom of the 7th, Cade Zacharias was able to get himself into scoring position.

Zacharias got on first base due to an error, then stole second and third. Britt Mauldin secured the 2-1 victory for Academy on his second consecutive strikeout, which stranded Zacharias.

Klay Persche scored the first run of the game for Academy in the third inning, after the McGregor catcher was unable to secure a pitch.

Mauldin hit a RBI single that gave Academy a 2-0 lead after three innings of play.

The Bumblebees (16-10, 8-5) struggled to advance runners early on and they stranded four runners in the first three innings.

McGregor pitcher Zack Carrillo was able to keep his composure and he came away with two strikeouts to close out the second and fourth innings with runners in scoring position.

The Bulldogs (6-14, 2-13) struggled at the plate all night. McGregor finished the game with just three hits, large in part to the performance by Academy pitcher Cole Riser.

“Cole has pitched like this all year,” said Academy skipper Garrett Vail. “One thing we’ve worked on is attacking hitters and not playing around with them and he gets good results when he does it.”

Dalton Aycock placed a ball into shallow center field for McGregor in the second inning.

Zach Williams reached second base on Aycock’s hit after being walked. Williams took to big of a lead off and was picked off a second base.

Carrillo provided an offensive spark for McGregor in the bottom of the fourth. The junior hit a single to center field, then stole second two pitches later.

Riser struck out the next three Bulldog batters to retire the side.

“We have to get guys on base, I’ve been telling my team that we’re striking out too much,” said McGregor head coach Clay Cunningham. “You know, when a couple guys get on base then you can run a little bit and that’s what our team does best.”

McGregor finally got on the board in the fifth inning.

Riser walked McGregor’s Veandre McDaniel and put a runner on first base. Riser would strike out the next two batters, but that wasn’t good enough.

McDaniel stole second and put himself into scoring position. Zacharias hit a single and McDaniel was able to give McGregor their only run of the game.

These two teams will play again on Friday at 7:00 pm in Academy.

Coach Viel believes  that with the necessary adjustments and momentum the Bumblebees should get the sweep on Friday.

“We stranded six runs in this game, so we’re gonna practice putting runners in position this week and see if we can put some pressure on them.”

As for Coach Cunningham, he hopes the Bulldogs can carry their momentum into Friday.

“I believe we can use this momentum. We’ve played some really good teams in district and I think we’ve got some confidence right now, we just have to swing the bat well.”