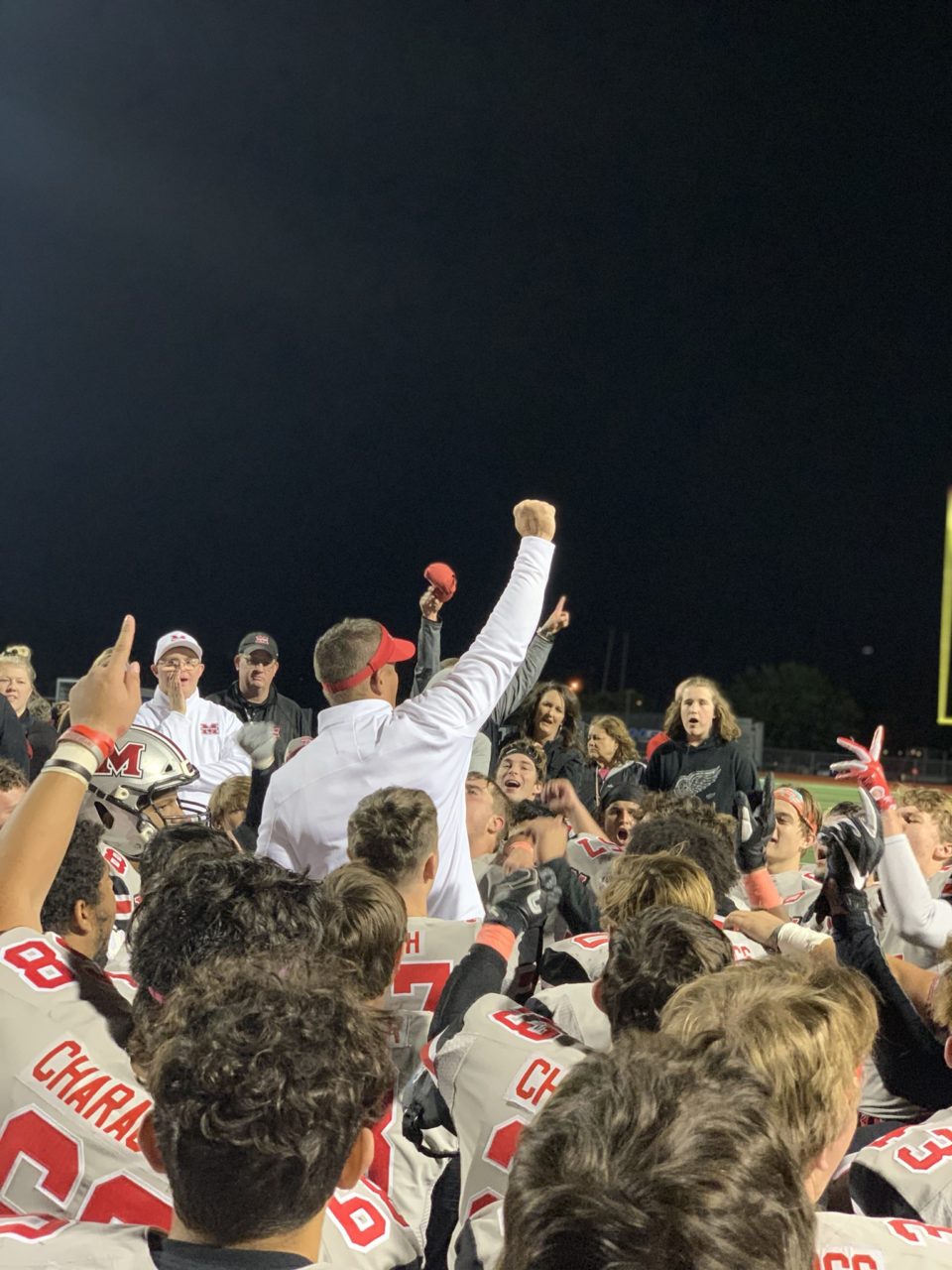 The Marauders beat the Hebron Hawks 24-14 at last night’s game. After the win, the team chanted one phrase throughout the stadium —“the M is back.”

The Marauders are currently 3-0 in district play.

“We have the ability to obtain what we need to get [a win],” junior running back Ryan Ross said.

The Marauders got the ball to start the game but ended up going three and out. Hebron responded with a quarterback rush for eleven yards in the endzone but missed the point after touchdown. This put the Hawks in the lead 6-0 with around eight minutes left in the first quarter.

After another three and out for the Marauders, Hebron got the ball back at their own 47 yard line. However, a blocked punt from the special teams put the Marauders in a scoring position. Junior quarterback Garrett Nussmeier found senior tight end Colin Sutherland for a touchdown, putting the Marauders ahead 7-6 with about five minutes left in the first.

The Hebron special teams fumbled on a kickoff, which resulted in a field goal and made the score 10-6 with two minutes left in the first.

The Marauder’s special teams then recovered an onside kick,  which allowed Ross to score a touchdown. This increased the Marauder’s lead to 17-6 and ended the quarter.

In the second quarter, Hebron had three drives and the Marauders had two, but neither team scored, so the score remained 17-6 going into halftime.

After blocking another punt, the Marauders were put in another scoring position with 10 minutes left in the third quarter.Nussmeier threw the ball to Sutherlands to get a touchdown, making the score  24-6.

Hebron then responded with an eight play drive, which ended in a tipped pass to the endzone. This narrowed the Marauder’s lead to 24-14 with about seven minutes left in the third, and the score stayed the same throughout the rest of the game.

Both teams punted the ball back and forth as they went into the last quarter. On a 4th and 1 plunge, senior linebacker and running back Ethan Barr secured the win for the Marauders..

The victory allowed the Marauders to defend their top position in  the 6a-6 district. The team has already tied their season win total from last year, which was five.

The Marauders’ next game will be on Friday against Coppell. It will be held in Marauder Stadium at 7 p.m. If the Marauders come out on top,  the team will inch themselves closer to securing a playoff spot.