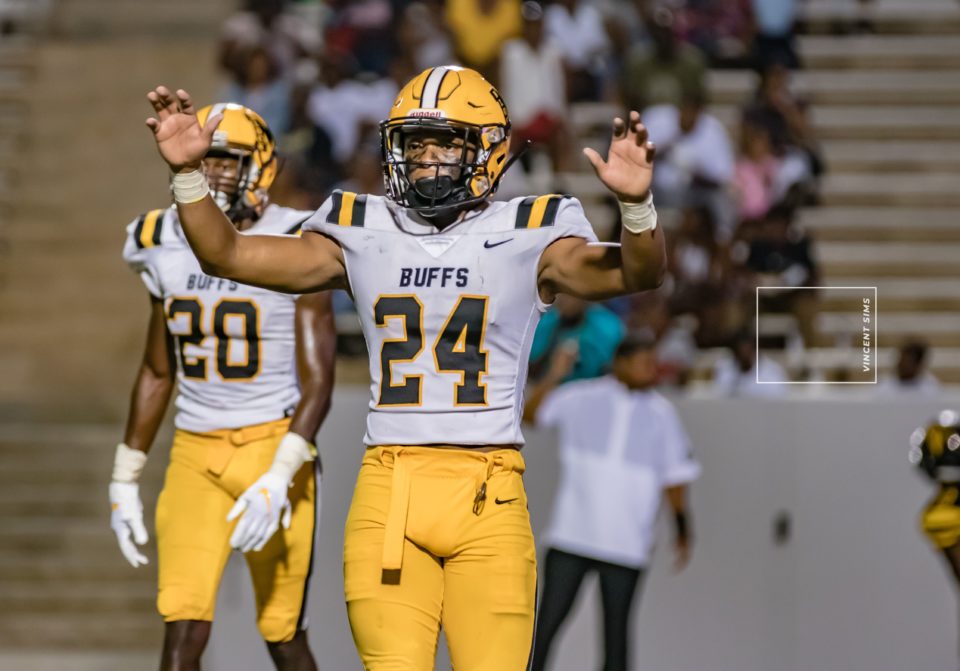 Fort Bend Marshall has put the state of Texas on notice in recent years. Four consecutive seasons of double-digit wins. Four consecutive seasons of state quarterfinals appearances. Last season, they got to the 5A D2 state championship game before being sent packing by powerhouse Aledo. This year, the matchup remains the same but Fort Bend Marshall is eager for revenge this time around.

“I’d honestly have to say experience, having the opportunity to go 30+ games over the last 2 years has us primed and ready,” senior linebacker Norman Baker said.

The Fort Bend Marshall Buffalos this season have been dominating game in and game out. Last year’s squad let up 19 points a game on average. This season, the defense has improved that mark to a ridiculous 12.2 points a game.

“We just take it one week at a time,” senior defender Derek Ledet said. “We prepare every week like it’s a state championship game.”

“The key to our success is our effort and preparation. Without that, we would not be where we are,” junior linebacker Kenny Seymour Jr. added.

Fort Bend Marshall is 50-8 in the last four seasons. Along with that, they’ve improved in points per game, points allowed per game, and point differential each year for the past four years. Four years ago they were scoring almost 38 points a game whilst giving up 25.5. Fast forward to now where they give up less than 13 yet score more than 48 a game.

“The key is character, discipline, hard work that’s our motto we go by every day,” Brown said on his team’s winning culture.

“Our Motto…. character, discipline and hard work. We (the team) police each other,” Baker added. We know what the expectations are and if we’re not moving appropriately we check each other.”

Last season in the championship game, the Buffalos got blown out at AT&T Stadium by the tune of 55-19. They come in this year locked and loaded as the defense hasn’t given up more than 35 to anyone all season.

“Last year’s loss has motivated us,” Ledet said. “This year we’re more focused and determined to finish what we started.”

“This year’s team has a lot more fight than last year’s team. We do a lot of preparation all week,” Seymour Jr. added.

Fort Bend Marshall plays old school football as for four quarters they will run it down your throats while playing exceptional defense on the other end.

The offense is led by quarterback Malik Hornsby and Texas A&M commit running back Devon Achane. Hornsby has run for 1,427 yards with 15 touchdowns while Achane has gone for 2,091 yards and 38 touchdowns. As a duo, they account for over 230 yards and 2.5 touchdowns a game on the ground alone. Hornsby has also thrown for 2,000 yards and 28 more touchdowns as he has offers ranging from Baylor, Purdue, and Oregon among others.

The defense as mentioned earlier has been lights out all season.

Kenny Seymour Jr. transferred this season from Clear Falls high school and has made an immediate impact for the Buffalos defense. He leads the way in tackles for the team with 131 on the year. He also has two and a half sacks with an interception and four fumble recoveries on the season.

“My Defensive Lineman does a crazy job of keeping me free to make tackles. I also constantly try and be around the play,” Seymour Jr. said.

Edward Brown is third on the team in sacks with nine and a half along with seven tackles for a loss this season.

“The key was summer workouts, I took advantage of all my offseason it was no days off,” Brown said. Live in the weight room.. but not finish now one more (game) to improve the stats.”

Seniors Derek Ledet and Norman Baker each have upwards of 50 tackles as well with four and seven sacks on the year respectively.

“Hard work,” Baker said on his personal success. “I’ve never said or believed or thought I was the most talented football player but there are few people who are gonna outwork me.”

“My d-line, we have one of the best d-line in the state. They do their job up front and I just react off of them and flow,” Ledet added.

Fort Bend Marshall has been on a mission ever since last season’s devastating loss in the state championship game.

“It would mean a lot (winning state). We work so hard from spring to summer workouts. We have been through so much these past 2 years, losing our brother Drew. We want to finish it for him,” Ledet said.

Last season, in December, senior safety Drew Conley was fatally shot by a relative during a heated argument. The Buffalo defense has been playing in his honor ever since. The cherry on top? Stopping Aledo’s dominant offense and claiming a state championship for Drew and the Buffalos.

What would it mean for the Fort Bend Marshall team to win that first state championship?

“Everything! We work so hard and to finish the season as state champs would be the icing on this cake.”

“I will love to see that ring on my ringer,” Brown added.

“It would mean everything to my senior friends,” Seymour Jr. said. “They gave me a new family and I will give everything on the line for them.”

“I plan on finishing this season a state champion.”

Beyond The StatZ: feat. Sofian Massoud