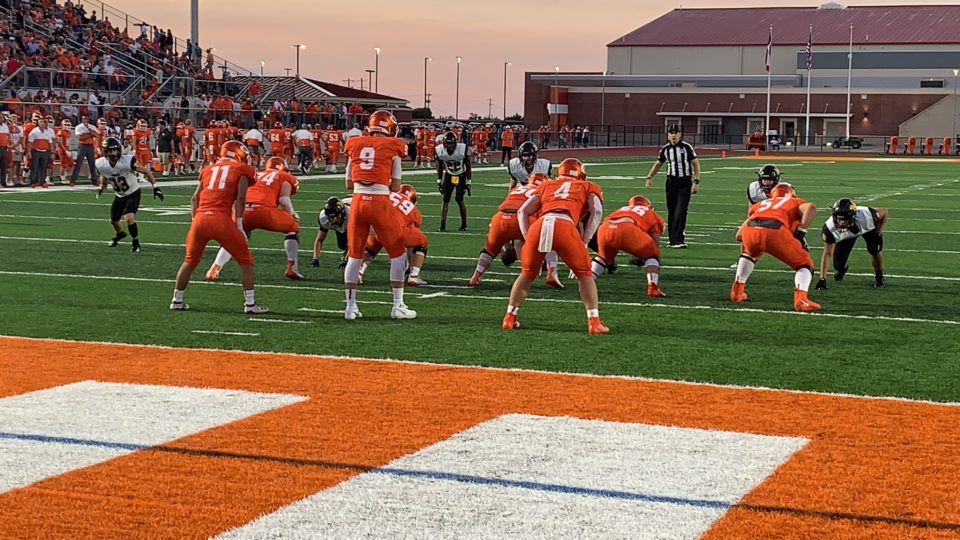 Second year program Frisco Memorial opened the 2019 season with a 16-14 victory over the Celina Bobcats. The Warriors were able to avenge a 53-0 loss that they suffered at the hands of the Bobcats in 2018, and they couldn’t have picked a better night.

Celina I.S.D. opened new Bobcat Stadium but, the Warriors weren’t impressed. Defensively, they held the Bobcat offense to only 228 yards of total offense after Hunter Watson and company started hot. Watson delivered a 27 yard scoring strike to DJ Dell’Anno on the opening offensive series. The Warrior offense would come right back on their first offensive series with a 60 yard run to the Bobcat 1 by sophomore Garren Huey. Chris Lagrone would score from a yard out on the next play. Ronald DeMadet would intercept a Watson pass on the Bobcats ensuing drive and after a nice return, Charlie Flowers would deliver a 23 yard scoring pass to Joel Shea.

The Bobcats would go into halftime with a 14-13 lead, thanks to a missed extra point from the Warriors and a 2 yard scoring run by Isaiah Martinez.

The Bobcats had a chance to extend their lead in both the 3rd and 4th quarter but, dropped passes and 2 missed field goals would cost them dearly. A 20 yard field goal from DeMadet with 9:16 left is all the Warriors would need to leave Celina with a win.

Frisco Memorial will put their best foot forward and try to move to 2-0 when they take on Frisco Independence next Friday. Celina will need to put this loss behind them in a hurry as they prepare to host Argyle Liberty Christian that same evening. Both games kickoff at 7PM.