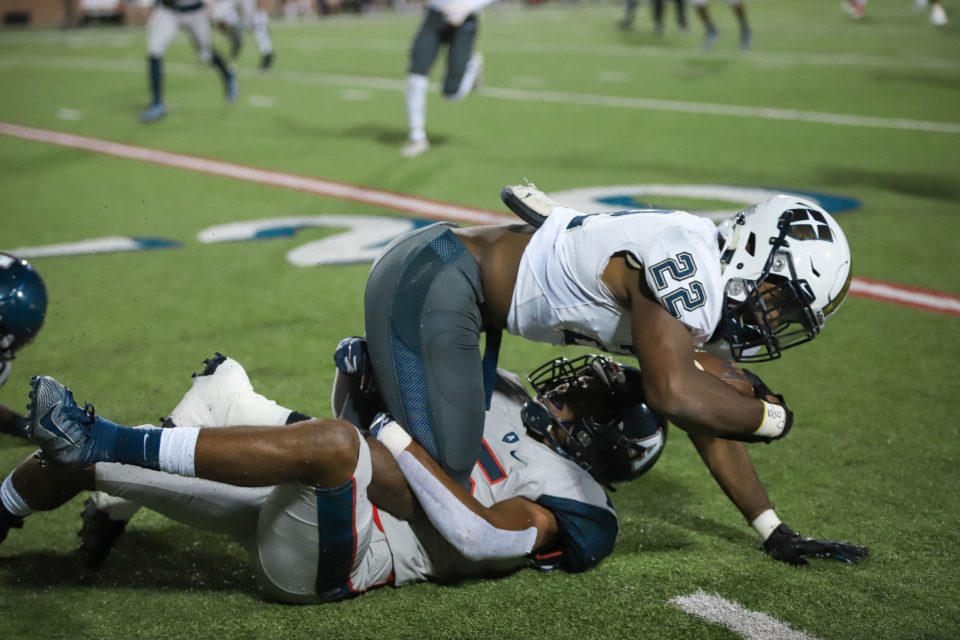 Dallas Jesuit is home to one of the most storied athletic programs in all of Texas. The school is home to 113 state championships dating back to the mid-1950s.

Yet, most of them were when Jesuit was apart of the TCIL, Texas Christian Interscholastic League, better known now as TAPPS. They have multiple state championships in football but none since they made the switch to the UIL. Three district championships but no state titles. Friday night’s shocking upset win over Longview might be the sign though that Dallas Jesuit, has arrived.

In 2000 after the TCIL was abandoned and TAPPS was born both Dallas and Strake Jesuit were not allowed to join due to them being too powerful so they were admitted to the UIL.

Fast forward to 2019 and both Dallas and Strake Jesuit are making runs at the 6A D2 state championship by knocking off Longview and West Brook respectively.

The most shocking win of all the area round, however, was Dallas Jesuit’s 27-25 win over previously undefeated Longview.

Longview, coming into the tournament was one of the most dominant teams in all of Texas. Haynes King and company had just won it all the year prior, were winners of 27 consecutive games and were the favorites to do it again.

Coming into the area round matchup against Jesuit, Longview had been on a run consisting of scoring over 40 points per game for the past seven games. Jesuit held the Texas A&M commit and his offense to just 25.

How? “We just needed to limit mental mistakes and play our game,” Barton said.

Barton has done it all at Dallas Jesuit. As a sophomore, he led the team in interceptions. As a junior, he was the Rangers’ defensive player of the year and was named to the all-district second team. As a senior, he’s even better. 107 tackles, seven and a half for a loss with two more interceptions.

“Coach Hickman just reiterated the simple message you vs you, pretty much just telling us that the only competition on the field during the game was against ourselves,” Barton added. “We were all confident we could beat Longview.”

Barton in his career has well over 200 tackles as well as offers from Davidson, and DePauw among others.

“Overall, the reason I can make plays is because the front seven is doing its job, eating up the offensive linemen and making my job easier,” Barton said.

Barton played at safety his sophomore and junior year but was asked to make the move to inside linebacker. He thanks his teammates and coaches for the smoothe transition.

“Playing alongside another senior linebacker in Tommy Roy has been instrumental to my success. He has started at linebacker since his sophomore year and really is a seasoned vet. Tommy has helped me develop, through film study and communication,” Barton said. “Also, coach Maturi, my inside linebacker coach, has been critical to my development, as he meets with us during lunch to watch film and game plan.”

Jesuit ended the regular season 6-4 as their season has been a rollercoaster of peaks and valleys. They started off 0-2 with losses to Arlington and then DeSoto. They then went on a four-game winning streak that saw them beat the likes of Wylie, Plano West, Boyd, and fellow quarterfinalist Prosper by a combined score of 172-45.

A few weeks later four-star recruit and Jesuit’s best offensive weapon, EJ Smith went down with an injured hand thus allowing Mckinney to beat them by three and even Plano East almost sneaking in a win.

“Beating Longview and really all of our wins has come down to our team’s great chemistry,” Barton said. “Us seniors decided to try and change the culture in the program.”

“We have a brotherhood that really helps in key situations during the games as we fully trust in one another.”

Barton believes that being one of the two private schools in all of the UIL gives the Rangers an advantage unlike any other.

“A lot of teams just see us as a small private school, which plays into our advantage as we are always underestimated and the underdog, which we prefer,” Barton said. “As long as we stay consistent and play together I think we can surprise a lot of people in the upcoming weeks.”

Jesuit has already done the unthinkable. They’ve beaten the overwhelming favorite and have shown the entire state that they have arrived. Jesuit soccer in 2010 has a perfect season and became the first private school ever to win a state championship within the UIL. The 2019 Rangers look to do the same thing but for football.

They’re next matchup? 11-1 Klein Collins. Win or lose though Barton and the 2019 Rangers have one simple goal.

“Leave the program and the culture better than we found it.”

With their win over Longview, there’s no doubt in anyone’s minds that they accomplished that.

GAME PREVIEW: Can Mansfield Summit beat Desoto and prove legitimacy in the District of Doom?