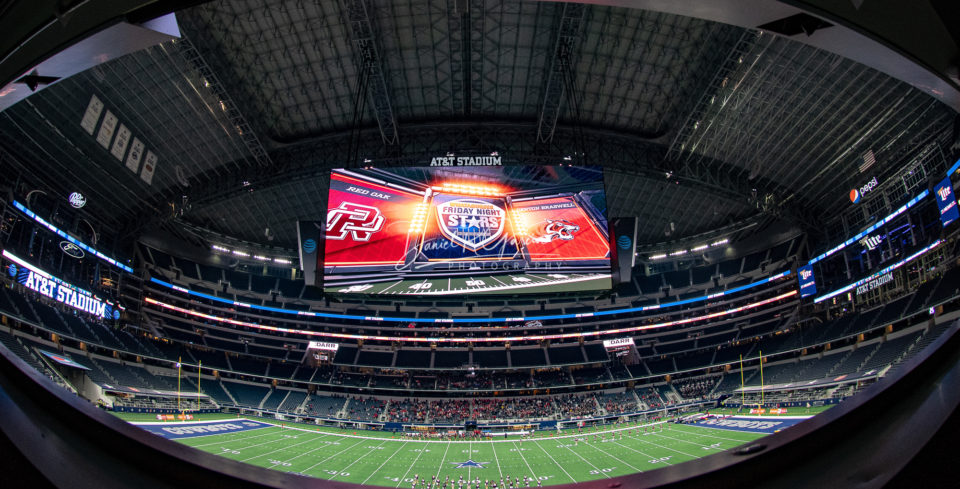 On August 29th, Red Oak lost its season opener against upstart Braswell 48-27. Since then, they’ve gone 11-0 and have reached the state quarterfinals. Their latest win? Beating Braswell 35-30.

“We’ve come a long way since week 1 and to overcome adversity and push through all obstacles and get that win speaks volumes to the mental toughness and strength our coaches instill in us daily,” Quarterback Josh Ervin said.

In the Hawks 11 wins this season they’re averaging an absurd 60 points a game. They’ve hit the 70 point mark four times this season even winning a game by 84 points.

“‘Underdogs’, is what motivates me and my brothers to go harder.  So we come out and work like dogs every day to prove that we can play with anyone,” Wide receiver Raymond Gay II said.

“It all started during the off-season, all the work we put in and just going 1-0 every week,” Wide receiver Coby Cavil added.

Opening week against Braswell was the lowest point total the Hawks offense had put up all season. On November 23rd, inside of AT&T stadium, they got the rematch that they wanted. Braswell vs Red Oak in the area round of the 5A D2 playoffs.

“It was an amazing experience just to play in the stadium, but the win was even better, just to be able to come out and do what we do best,” Cavil said.

The Hawks came out with a vengeance Saturday night and punched Braswell right in the face at Jerry world. They went into halftime with a 28-7 lead and never looked back eventually holding off a late Braswell surge to win 35-30.

“Playing at AT&T against Braswell was just another game in a bigger environment because I knew I worked all week to prepare,” Gay II said.

The Hawks offense is run through junior quarterback, Josh Ervin. Ervin in his 12 starts is completing over 70% of his passes for 2,600 yards and 38 touchdowns to just four interceptions.

“My coaches put my brothers and me in the best positions to make plays. They make our jobs easy by the time and effort they put into us,” Ervin said. “From my guys out wide that give me easy looks to my guys on the line and in the backfield that set up the passing game through the run and keep me clean. It’s been great but the people around me making my job easy has been the key.”

Ervin at AT&T stadium completed 14 passes for over 380 yards and four touchdowns.

Cavil is the leading receiver for the Hawks hauling in 59 passes on the season for over 1,200 yards and 16 touchdowns. Cavil on Saturday caught seven of his 59 passes for 241 yards and 2 touchdowns.

“I just had personal goals I wanted to achieve this season,” Cavil said. “Just preparing for them all offseason, shoutout to the team and the coaches for helping me achieve them.”

Raymond Gay II, on the other hand, has 32 catches for 700 yards and nine touchdowns to his name. At AT&T stadium he caught five balls for 106 yards and a touchdown.

“Hard work and dedication, and giving 110 % every day to make sure I’m getting better as an individual and that I’m making my team better,” Gay II said on his personal success.”

It took three months, but Red Oak finally got their revenge on the team that gave them their only loss this season and they did it on the biggest stage in all of Texas. The 2019 Hawks are one of the best teams Red Oak has ever produced. They will need to be their best in the quarterfinals as they take on state powerhouse, and winners of four of the last six state championships, Aledo.

“Honestly, we’re going to play our brand of football. We’ll come in ready to work and execute throughout the week. At this point in the season, every team has earned the right to play, and we’re no different,” Ervin said. “Every man on this team has faith and belief in what we have and what we can do. It won’t be easy and it won’t be perfect but we’ll give everything we have to keep our family together. The goal is to come out 1-0 and you expect that we’ll give our all for that to be the outcome.”

Raymond Gay II added – “For us to come out and play our game, attack the little things, and stay focused on the main goal play by play.”

Ervin, Gay II, Cavil and the rest of the offense will need to be locked and loaded if they want to take down an Aledo squad that only allows offenses to put up 17 points a game on average.

Their quest for revenge is complete. Now, Red Oak looks to continue that success and become the greatest group of Hawks in history.

Josh Ervin says it best – “We’re going to play our brand of football.”

The Players Behind the Best Football Team in Plano, John Paul II