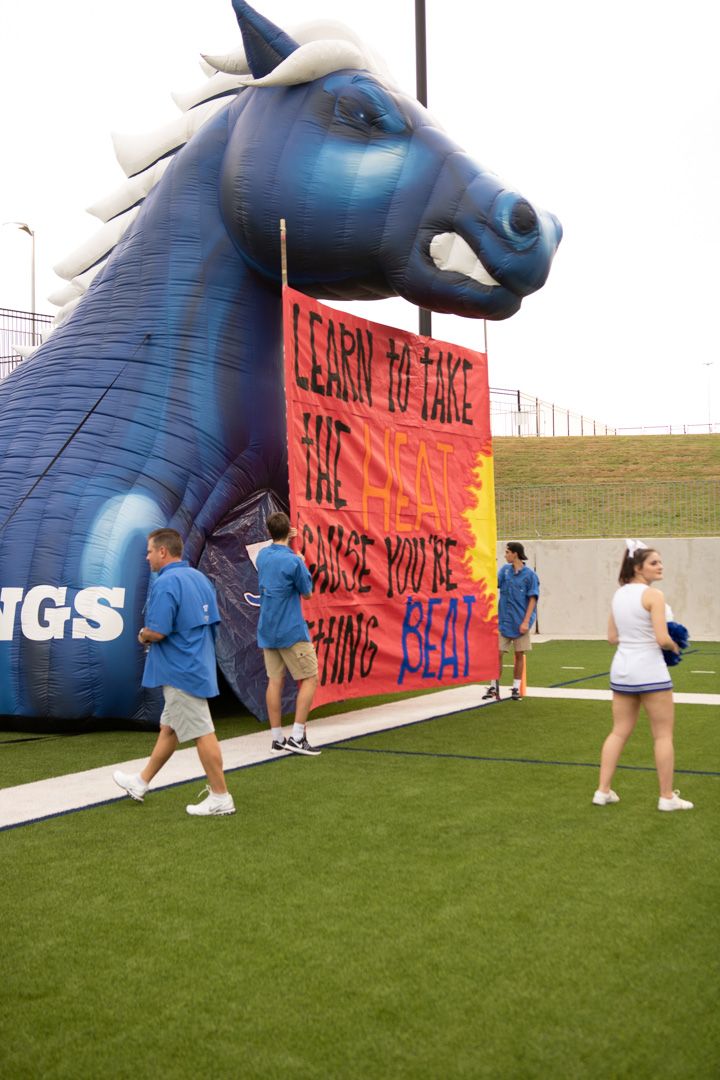 A 69-7 loss to Atascocita. A 49-6 loss to Dickinson. 14-10 loss to Mayde Creek. 38-12 loss to Tompkins and a 57-0 blowout at the hands of Katy. Those are the five losses that Katy Taylor has had this season. Katy Taylor was the recipient of a grueling regular season schedule yet ultimately finished the regular season at 5-5, including 3-3 in district play and snuck into the playoffs. There are a few things that those five teams have in common. One is that they all made the playoffs. Another being that none of them have made it as far in the post-season as Katy Taylor has.

“We’re a completely different team then we were earlier in the season because we just have a new confidence and a new swagger,” junior Trevor Woods said. “The defense has been flying around and the offense has been able to move the ball at will.”

“First off you have to thank the coaching during this run, their playcalling on both sides of the ball has been absolutely brilliant. We go into every game with a great chance to compete and go win, but the biggest difference between the regular season and the playoffs has been our brotherhood within the team,” senior Braden Hay added. “Everybody gets along and we’re on the same page working together to build our legacy and bring home a championship.”

Katy Taylor during the regular season scored on average 26 points a game while giving up almost 32 a game. They had a negative 58 point differential going into the post-season.

Katy Taylor in the post-season has been a completely different animal. In their four playoff wins the Mustangs are putting up 41 points a game while only giving up 22. These Mustangs are a different beast then they were just one month ago.

With this unprecedented success, Katy Taylor has now reached nine wins for just the second time this decade and is in the state semifinals for the first time this decade.

Part of the success is due to dominance displayed on the defensive side of the ball. In the past three games, they’ve held Memorial, Humble and Cypress Creek to 16 points a game on average. Not one of them scored more than 21 points against the Mustangs.

“Defensively our mindset has been to give ferocious intensity and to fight for the brother next to you,” Hay said. “Big plays feed our offense with momentum so we do our best to get those key takeaways to swing the odds in our favor.”

“The defense has been flying around and just having so much fun while doing it,” Woods added. “Also the coaches have been giving us such detailed scouting reports and preparing us so well and it gets to a point where we know that the offense will do before they even snap the ball.”

Trevor Woods and Braden Hay are just two of the defensive stars for the Mustangs this season. Woods leads the team in tackles and sacks with 146 and seven respectively. He also has four interceptions and four forced fumbles on his resume.

“Just having the experience of last season under my belt now I feel so much more comfortable than I was last year and as the season continues my confidence just continues to build and I’m learning things that have slowed the game down for me,” Woods said.

Braden Hay leads the secondary with a team-leading five interceptions and 11 passes defended. His season also included 111 tackles with a blocked field goal.

“Personally, I am not doing anything special,” Hay said. “You have to credit the d-line and linebacker for doing their jobs and putting pressure upfront to make everything much easier on the back-end. When you see us making the big plays, a lot of the credit has to go to those guys man, they’re amazing.”

Everyone counted the Katy Taylor Mustangs out before the post-season even began but they’ve shocked the world and are now in the state semifinals. The road less traveled doesn’t get much easier however as Saturday at Waco’s McLane Stadium the Mustangs of Katy Taylor take on the juggernaut that is Austin Westlake.

Katy Taylor has held each of it’s first four opponents to fewer points than their average and they’ll need to do the same against Westlake as they average upwards of 47 points a contest.

“Expect a thriller next week, we have the athletes on our team to compete with anybody. You look at the schedule we have faced in the regular season and it was very challenging,” Hay said. “Tough losses in games where 3-4 plays decide the game, recently we’ve been finding out a way to swing those plays in our favor, so we’ll be looking forward to a great matchup next week.”

“If we continue to play with the same intensity that we have been playing with l think we can compete with anyone,” Woods added.

Katy Taylor has shocked the state of Texas this postseason and has lived by the mantra “any given team can win on any given day.”

Regardless of the outcome against Westlake, this will go down as one of the most successful seasons in Katy Taylor Mustang’s history.

“I hope that my future is just as exciting as life is going right now,” Hay said.

Wagner and the Lost Art of Smashmouth Football