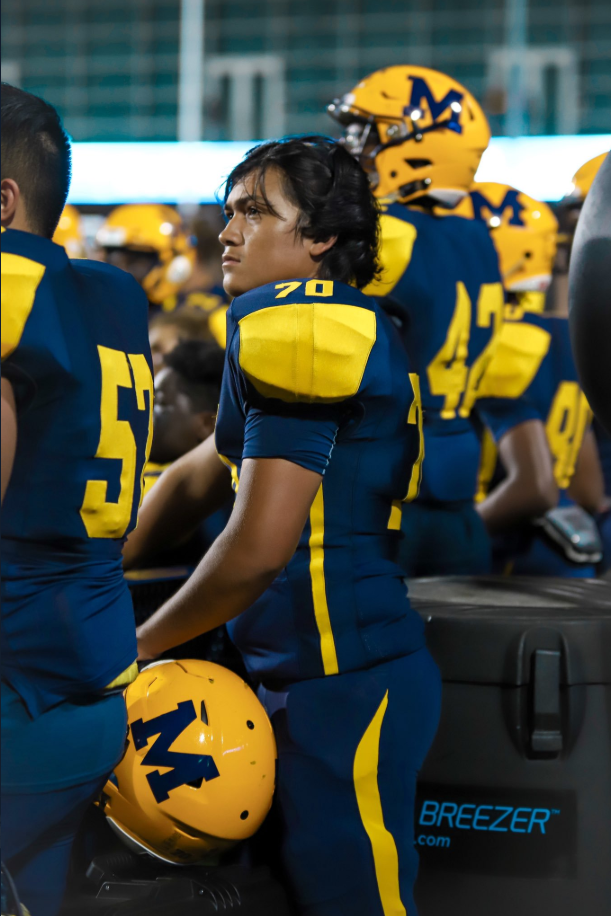 It’s not that they were a bad team they just kept ending up on the wrong side of the scoreboard. They opened the season against now 9-1 Mckinney North and Texas’ leading passer, Dillon Markiewicz. They only beat the Lions by two points.

They suffered a seven-point loss to Plano added with the fact that they were matched up against two district powerhouses, Prosper and Allen right out of the gate and the picture all of a sudden looks more clear.

Yes, the Lions had a rough start but they went up against some loaded competition. If they wanted to make the playoffs they would’ve had to make a run and hope for some chaos.

Fast forward to the last week of the regular season. Chaos had ensued.

Mckinney had rattled off three straight victories over Plano West, Plano East and an upset over Dallas Jesuit.

They entered the final week of play at 5-4 and 3-3 in the district. But, playoffs were still not a guarantee. The first step, they needed Prosper to beat Plano, if Plano pulled off the upset then they would receive the final spot in district 9

Now, it all comes down to Mckinney’s game against in-town rival Mckinney Boyd. Essentially, an early playoff game. Whoever wins makes it to the round of 64, the loser? Your season ends in heartbreak at the hands of a team that is located less than five miles from you. This is what Texas high school football is all about.

Obviously, a lot is on the line for this struggling program. A victory over their rival, a playoff berth and a potential winning season which would be only their second one of the decade.

These Lions, however, are built differently. One main reason for their turnaround is new head coach Marcus Shavers.

Shavers took over the program in 2018 and immediately found success. They went 4-6 in regular season play, but they beat Boyd, got into the playoffs and had a close loss to Wylie in round one.

One year later and Shavers has the chance to do it again this time with more victories along the way.

It was a slow start though on the night of November 8th as with just under 10 minutes left in the first half, Boyd’s Ja’Tyler Shaw took a handoff 75 yards to the house for a 7-0 lead.

Mckinney had a late chance at a field goal but it was blocked to enter halftime with a seven-point deficit.

The Lions came back out in the second half more energized than ever. They ere shutout in the first half yet still were in the game. They capped off a drive with an RJ Carver six-yard touchdown run to tie the game at seven.

“The lord above, my hard work, my O-line and coaches for giving me an opportunity to succeed,” Carver said about his success and his touchdown.”

The Lions were able to have such excellent starting field position due to wide receiver and return man, Isaiah Wallace setting them up with a short field on the opening kickoff by Boyd.

“I’ve been preparing since last season ended on having the best senior season I could possibly have,” Wallace said. “I worked on my craft after our summer workouts, after everything I put in extra hours so that I could be successful and help my team as much as I can.”

Mckinney Boyd was on the prowl and ready to score late before quarterback Carter Whitefield threw one of his three interceptions on the day to the Lions’ Jalon Rocquemore.

Boyd returned the favor with an interception of their own and with only a few minutes to go you could feel the pressure starting to kick in.

The Lions eventually got the ball back, drove within field goal range and kicker Seth Cox put it through the uprights to give the Lions a three-point lead with less than two minutes to go.

The Lions had shutout Boyd in the second half thus far, just like how they themselves were shutout in the first half. They needed one more stop to get back into the playoffs.

That’s when Lions’ Adrian Shepherd made a play intercepting Whitefield’s deep pass for his second takeaway and interception of the game.

“It felt great to go up and get my second pick of the game at the time that it happened,” Shepherd said. “Making plays is expected of me from my coaches and throughout this McKinney defense.”

The Lions accomplished what was almost unthinkable a month ago. A 4-0 run, beating Boyd and getting into the playoffs again.

“I’ve never seen the school come together like that and it feels great,” Wallace added.

The Lions are on a hot streak and will take that into the playoffs wherein 6A division 2 they match up against Naaman Forest.

“We are going to work to get what we deserve,” Shepherd said. “It’s going to be a hard-fought game.”

“Expect us to come out aggressive, physical and focused,” Carver said.

Wallace added, “We respect that team they remind us a lot of ourselves because we started off 0-5 last season just like they did this season and slipped into the playoffs.”

“We are prepared to play a physical 4 quarters of football.”

The key to a long Mckinney Lions playoff run?

“Maintain focus,” “being hungry,” “working as hard as we can,” said Shepherd, Wallace, and Carver respectively.

The Mckinney Lions travel to Naaman Forest on November 15th to take on the 4-6 Rangers in Garland.

Isaiah Wallace put it best when asked about the future of his team – “If I’m flying around my team will be flying around and if that’s the case it will be a whole bunch of hungry lions, and when we are all flying around it’s a scary sight!”