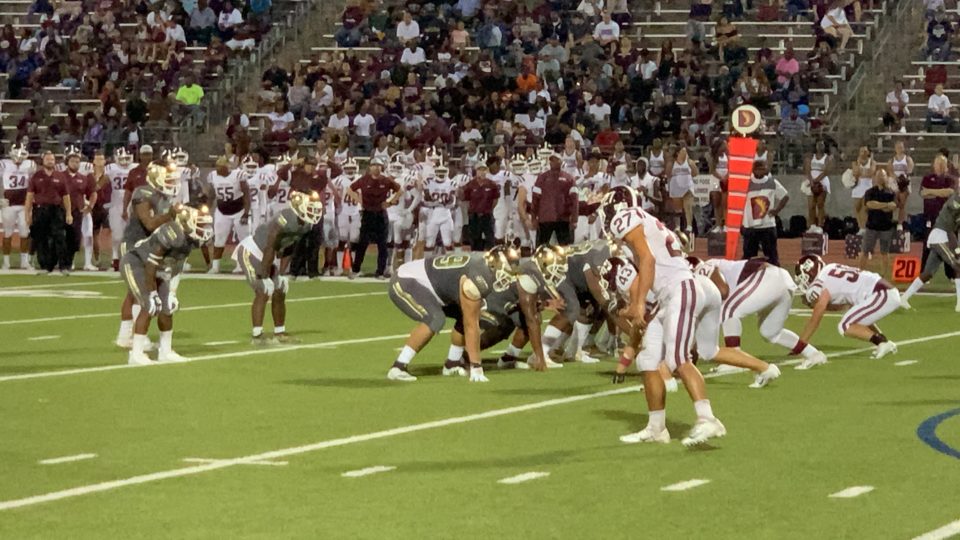 It was the district opener for both teams and it lived up to the hype that it received going in.

The Hawks would jump out to 7-0 lead in the first quarter, thanks to Joshua Ervin finding Raymond Gay II on a quick slant for a 35 yard touchdown. The Golden Bears would make it 7-6 midway through the second quarter, when Rodney Hudson III would go deep for a 74 yard touchdown pass to DeMarco Moon. The Hawks would make it 14-6 when Coby Cavil returned the ensuing kickoff 94 yards for a touchdown to regain momentum and control. However, a 52 yard touchdown run by Hudson III and a 2 point conversion would tie it up at 14 on the very next Golden Bear drive. A tough 55 yard run by Palmer for a score would make it 21-14 in favor of the Hawks at halftime to end an exciting first half.

The second half started with a blast before both offenses went cold, thanks to good defensive play by both teams.

Camren Davis would score from 3 yards out on the Golden Bears’ opening drive of the second half to tie it up at 21. The Hawks offense would gain 1 first down before being forced to punt on their opening drive of the second half. But a muffed punt by Moon on the Bears own 2 yard line would set up the Hawks for what would prove to be the go ahead and winning score. Palmer would score his second touchdown of the night from a yard out to make it 28-21 with a little more than 3 minutes left in the third quarter.

There was stifling defense played on both sides. The Golden Bear defense would only surrender 187 yards for the entire game. The Hawk defense would give up 352 yards but it was their defense that came up with the biggest stop of the game when Elijah Shaw would intercept Hudson III on the Bears’ final drive of the night.

Both teams will have a bye week next week and will resume district play on October 4th. Red Oak will host Thomas Jefferson while South Oak Cliff will take on Adamson at Wilmer-Hutchins Stadium. Both games will kickoff at 7:30.

Jax McCauley, Jordan Cochran and The Juggernaut That is the Vandegrift Vipers