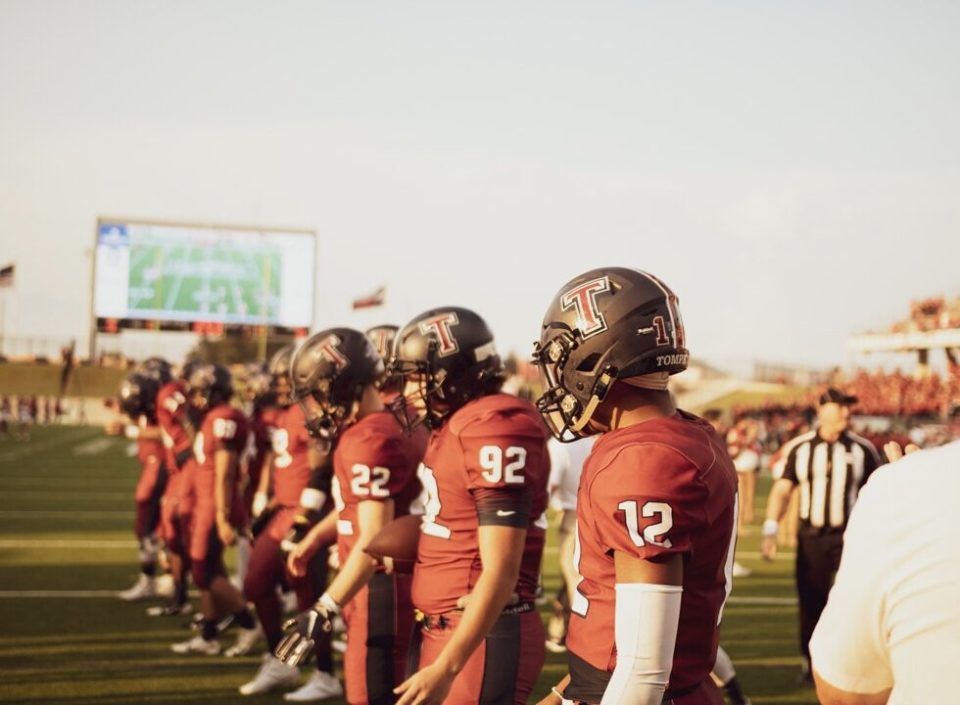 Tompkins High School in Katy, Texas was established in 2013.

In its first four years as a football program, they went a combined 5-34. That’s a win percentage of 12%.

In the past two seasons, Tompkins has gone 21-4 including back to back third-round appearances.

“The key to our teams’ success has been to stay focused on ourselves and do the little things right,” senior safety Pryce Powell said.

“The key to our success is really our bond and our core values as a program,” running back RJ Smith added.

A win against the 11-1 Atascocita Eagles would mean a 12-1 record for the Tompkins Falcons and their best year yet. A loss would send them right back home, in the same spot as last year.

Head Coach Todd McVey has found almost immediate success as the head coach of the Falcons. McVey took over in 2017 and stumbled out of the gate to a winless first year. He quickly rebounded off of that into a 10-3 season and a four-point loss to West Brook in the third round of the 6A D2 playoffs. This season their now 11-1, their only loss being by five to undefeated Katy, and now a date with Atascocita in the third round looking to avenge the 2018 squad.

Tompkins has improved every single year under McVey. Not just in wins, but in points per game, points allowed and as well as point differential.

This playoff stretch has been a grueling one for Katy Tompkins. They entered bi-district play having to go against undefeated Fort Bend Travis. The Falcons entered the fourth quarter with a 35-14 lead and eventually hung on to a 35-28 win to hand Fort Bend Travis their first loss of the year. Next, was 10-1 Cypress Falls. A back and forth contest between the two eventually worked its way into double overtime when star Falcon quarterback, Jalen Milroe, ended the game with a quarterback keeper.

“It feels great getting a good win in a close game,” running back RJ Smith said.

With the Eagles next, Tompkins’ first three opponents of the 6A D1 playoffs will have a combined win percentage of 88%. That’s just Texas High School Football for you.

One of the leaders of the Falcons offense is senior running back RJ Smith. Smith has offers from schools all over ranging from Princeton, Yale, Harvard, Temple, and New Mexico among others. Looking at his senior season it’s clear to see why. Over 1,300 total yards for 23 total touchdowns including 1,200 and 20 on the ground.

“The key to my personal success is really just my line and receivers blocking for me and my coaches trusting in me,” Smith said.

If Tompkins wants to beat the Eagles in the regional semifinals however they’re going to have to rely on their defense.

Atascocita is averaging an absurd 60 points a game this season. One of the senior leaders for the Falcons this year though is Pryce Powell. Powell kept the Cypress Falls game alive in the first overtime with his team-leading fourth interception on the season.

“It was a tough game and credit to Cy falls for playing well,” Powell said. “But, it feels great to be on the winning side and have the opportunity to play another week.”

Powell along with his four interceptions has 75 tackles including two for a loss.

“I don’t like to focus on much of my success, but credit to my coaches and teammates for putting me in situations where I can make plays,” Powell said. “We all know our roles on the team, and I just consider my success as part of my job.”

If the Katy Tompkins Falcons want to keep their season alive and take on the Katy vs. North Shore winner they’re going to need Milroe, Smith, and Powell to have the games of their lives in the regional semifinals.

“Expect us to play with great heart and effort, knowing that everyone will have us as the underdogs,” Powell said. “We feel like we can play with anyone in the state and will put in the time and work to prove it.”

The 2019 Tompkins Falcons already have the most wins in a season in school history. But, they don’t want that to be the end of their story. This team is hungry and is going to give Atascocita their best shot.

“I’m just focused on the next round and enjoying everything in the moment,” Powell said.

Trey Sofia and Lake Travis look to continue the dynasty