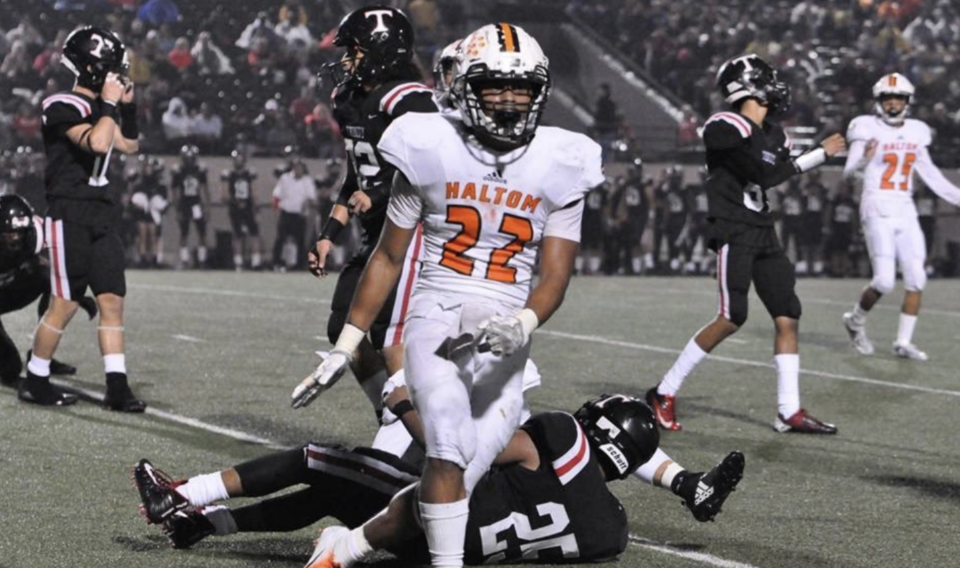 The Haltom Buffalos raised a lot of eyebrows in 2018 with a trip to the 6A-Division II regional finals.

They rode the arm and legs of quarterback Michael Black, wide receivers DeCorian Mitchell and Julian Johnson, as well as defensive leaders Keyon Shannon, Justo Perez, and Anthony Garcia.  All six have graduated but the cupboard isn’t bare with leadership or talent on either side.

A junior, Smith-Rider started every game as a sophomore at strong safety in 2018.  The ex-running back finished the season with 117 tackles, 3 interceptions, 2 sacks and was voted the newcomer of the year in district 3-6A.  While he was able to put together a wonderful 2018 campaign, he isn’t satisfied.

“We want to carry on what the seniors from last year started”, Smith-Rider stated.  He continued; “We want to pickup where they left off.  Me, Gavon, Kenneth, Jace, and Adam.  I feel pretty good!  Everyone is getting on the same page and understands what we’re trying to achieve.  I’ll do what I have to do to teach and coach up the young guys and we’ll all come along.”

Returning to help lead are seniors Gavon Lange, Kenneth Cormier Jr., and Adam Hill.  Lange garnered all-state honors at linebacker while Cormier Jr. softened defenses up with his physical nature at the running back position.  Athlete Hill is expected to step in at quarterback but could also remain a utility asset as he was in 2018.  Fellow junior and cousin Jace Washington was also a key contributor in 2018 as a sophomore but from the wide receiver position.  Like Hill, the 6’5 Washington could also be a utility asset and see time at quarterback.

Smith-Rider and company are eager to get back to business to let everyone know that Haltom isn’t a one-hit wonder.

“Coach Tucker has been building the program for a while now.  It’s finally taken off!”, he stated.

The Buffalos will officially open for business on August 30th at 7:30. The Saginaw Rough Riders will be their first opponent.