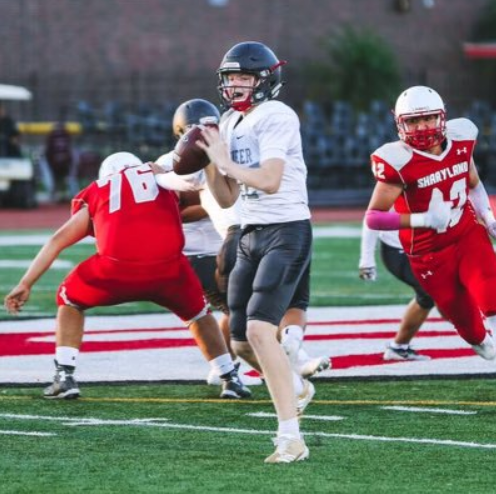 Since its inception in 2014 Pioneer had made it to the playoffs three times, but a playoff win always eluded them. In 2019 though under star quarterback Eddie Lee Marburger, Pioneer beat Southside 59-14 and finally got that first playoff win in the books. But, this Pioneer squad isn’t celebrating too much. In the words of Marburger – “It was a good feeling. On to the next.”

In six seasons of football, Sharyland Pioneer has only had one losing season. In the past five years, they’re 37-17 and have made the playoffs for four consecutive seasons.

They’ve been on the come up for some time from winning six games in 2017 and losing by double digits in the playoffs, to winning seven the next year and losing by only one in bi-district play, to this season winning 10 games including a bi-district blowout.

One of the main reasons for that success? Star junior quarterback Eddie Lee Marburger.

Marburger is one of the best players in the state of Texas and looking at the numbers it’s clear to see why.

3,600 passing yards with 52 touchdowns and just three interceptions. He’s averaging one interception every 111 attempts. He’s also the teams leading rusher with 874 yards on less than 80 carries and 13 more touchdowns. Marburger by himself is averaging nearly six touchdowns a game.

“The key to my success is my offensive line and my receivers those guys are everything,” Marburger said. “These guys are the best wide receiver core the valley has ever seen. Also, my running back takes all the pressure off me and he is a playmaker I am blessed to have him by my side.”

In just a few years as a school, Pioneer already has a state championship to their resume. In 2018, cheerleading won the 5A D2 state championship. Now, in the same conference, the football team looks to make it number two.

“The key to our success is everyone doing their job and just staying focused on the task ahead,” Marburger said.

Pioneer is coached by Tom Lee, who took over the program in 2018 after serving as the athletic coordinator and the coach of the track team for the four years prior.

In the two years under Lee, Pioneer is an impressive 17-5 with the future looking as bright as ever.

The offense under Lee and Marburger this season is averaging an impressive 50.8 points a game. That ranks 6th among teams still left in the 5A D2 playoffs with only Aledo, Calhoun, Fort Bend Marshall, Manvel, and Red Oak averaging more a contest.

In the area round of the 5A D2 playoffs, Pioneer matches up with 9-2 Weiss. Marburger by himself has more passing yards than Weiss has total yards on the year from scrimmage.

Marburger kept it simple when talking about Weiss and the rest of the playoffs by saying – “Give it our all every game.”

Sharyland Pioneer and Marburger are one of the most underrated teams and players respectively in all of Texas. What they’ve done as a program in such a short amount of time is nothing short of amazing. When you have one of the best quarterbacks in the state at the helm, anything is possible.

With Marburger being only a junior, it’s possible we haven’t even seen him at his peak yet, which for every opposing defense in 5A, is terrifying.

The future looks blindingly bright for Pioneer and Marburger but Marburger only has one thing in mind – “To keep playing and glorifying my Lord and Savior Jesus Christ.”

Samari Collier, Byron Murphy II, and Shemar Turner Look to Get DeSoto Back To Regionals