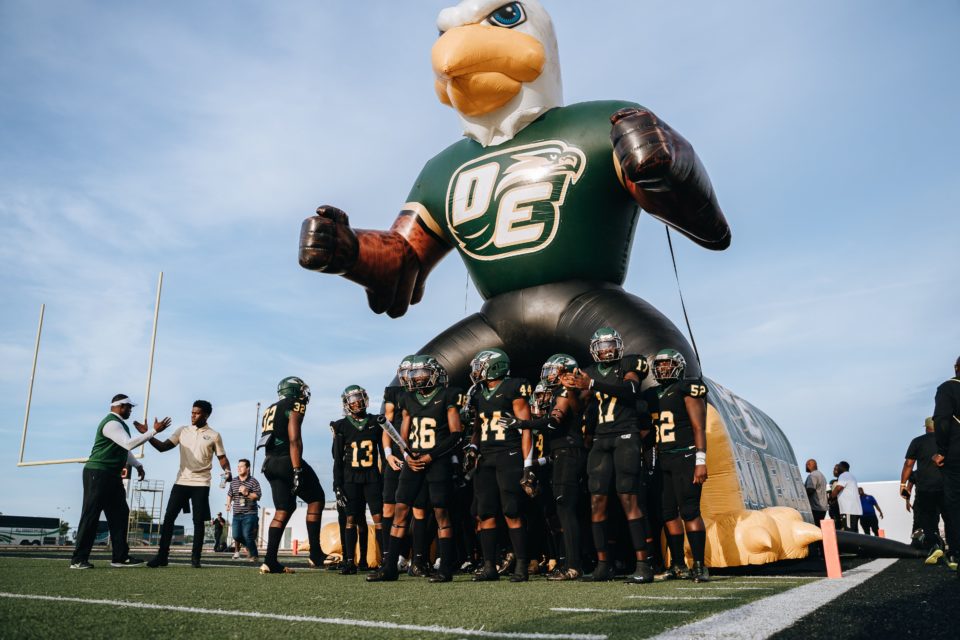 DeSoto high school is home to one of the best football cultures in the state. Its alma mater includes Jalen Mills and Super Bowl MVP Von Miller. In 2016, the Eagles of DeSoto went 16-0 bringing home their first football state championship in the process. They haven’t won one since though, the reason? Southlake Carroll.

DeSoto has entered the past three playoffs with at least eight wins. In the past three seasons, they’re 3-0 in bi-district play with wins over Copperas Cove in 2017 and Dallas Skyline the past two years. The problem is that in 2017 and 2018 they have fallen short to Southlake Carroll in the area round of the playoffs. Carroll won 33-15 two years ago and then again by a score of 41-20 last year. This season they enter the area round of play 9-2 taking on the now undefeated Carroll Dragons.

Three juniors, Samari Collier, Shemar Turner, and Byron Murphy II look to change DeSoto’s recent luck against Carroll and hope to knock off the dragons from their undefeated throne.

The area round of the playoffs has been unkind to the Eagles in recent memory as they’ve lost there in four of the past five years, twice to Carroll and twice to Allen. The one year they conquered Carroll in the area round they went on to win the state championship.

If Desoto wants that success again their going to have rely heavily on junior quarterback Samari Collier. Collier this season has just under 3,000 total yards and 32 touchdowns from scrimmage leading his offense to 45 points a game on average.

“I just watch film and break down plays and find a weak spot in opposing teams,” Collier said on his success this season.

The Eagles defense has been just as frightening this year. The Cornerstones of a defense that has let up only 17 points a game are juniors Shemar Turner and Byron Murphy II.

Turner as of now has 23 offers from D1 schools including Oregon, Oklahoma, and even LSU. The defensive end leads the Eagles in sacks as well as having 10 tackles for a loss and a forced fumble on the season.

Byron Murphy II also joins Turner on the defensive line with offers from Kansas, TCU and SMU among others. Murphy II is second in sacks with five and a half but adds 88 tackles, 12 for a loss and four forced fumbles to his resume.

“The key to my personal success is my explosiveness off of the ball,” Murphy II said. “Being relentless in the trenches, and the determination to win every battle.”

Collier who threw for 156 yards and two touchdowns said – “It felt good this was my first playoff win!”

Murphy II on the night led the team in tackles and sacks with 11 (all solo) and three and a half respectively.

“Getting our first playoff win and advancing to the 2nd round felt great, truly a blessing” Murphy II said.

“Felt great to get the first playoff win, but we are not done yet,” Turner said who had seven tackles with one for a loss on the night.

If they want to break their Carroll losing streak they have to knock off sophomore quarterback sensation, Quinn Ewers at AT&T Stadium Friday night at 4:30.

The things we can expect from Byron Murphy II – “Domination in the trenches, physical play and relentless pursuit with a high motor”

“Expect to see a dog who wants it more than anyone on the field,” Turner added.

It’s going to be up to Turner, Murphy II and the rest of the Eagles defense to give Ewers and the Carroll offense, who’s averaging more than 50 points a game, a rough outing.

“We just go out and play DeSoto football and represent the brand,” Collier added.

DeSoto looks to dethrone Southlake Carroll in one of the most anticipated matchups in the area round of the playoffs. The winner gets a date with Midland Lee or Lamar in regionals. The loser gets a long bus ride home, a ride home that DeSoto doesn’t want to do again.

These Eagles are locked in and determined to finally snap this Carroll losing streak.