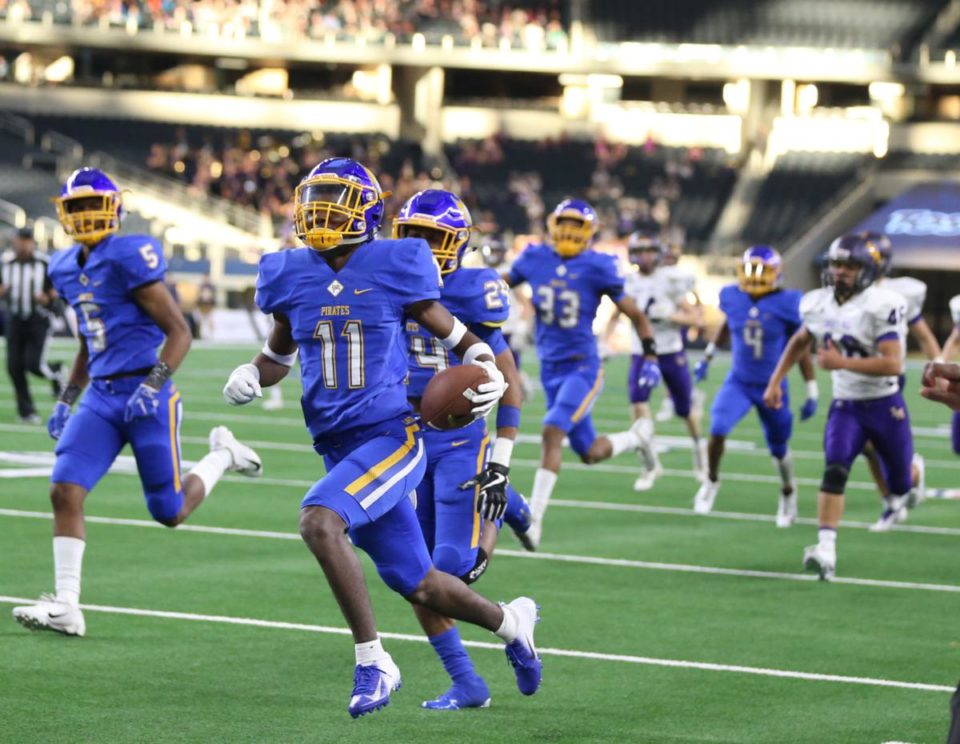 “It would be huge,” La Vega quarterback Landry Kinne said on potentially winning back to back state titles. “We’ve won it twice and Carthage has won it twice the past four years. So to win it this year would be really big. It should be a great game.”

No matter the outcome of Friday’s 4A D1 state final between Carthage and Waco La Vega, history will be made. Carthage is looking for its seventh state football championship and its third in the last four years. For La Vega, a win would signify it’s third in the past five years.

These two have owned 4A D1 football as of late as from 2015 one or the other has won it all. La Vega in 2015, Carthage in 2016-2017 and La Vega last season. These two are as dominant as two teams can be in a classification. This Friday however, will be there first meeting against one another in a state championship game.

“It would be a great accomplishment for our program because we would be the first at La Vega to repeat back to back state championships,” running back Jar’quae Walton said.

“Going back to back will be very glorious because we would be the first to do it at our school and then leaving high school with two rings on my hand,” fellow running back Elisha Cummings added.

“It’s a brotherhood at La Vega everybody grows up together and has known each other since they were little,” Kinne said. “Coach Hyde tells us the key to winning games is to block, tackle and take care of the football. If you do those things you’ll win a lot of games.”

“Staying focused and coming together as a team and not getting carried away about what everyone else thinks about us,” Cummings added.

La Vega is 2019 has been as dominant as ever going 14-1 up to this point while scoring 43.5 points a game and only allowing a little more than two touchdowns a game. La Vega has really turned it on in the postseason however as they’re defeating their opponents by nearly 27 points a game in the 4A D1 playoffs

“The key to our program is that all summer we work hard as a team,” Walton added.

The one flaw on La Vega’s resume though is September 6th. In the second game of the season, La Vega played a home game against powerhouse Argyle and fell flat to the tune of a 49-35 loss. If La Vega wanted to get back to the state championship game, they had to go through Argyle again, this time in the playoffs.

“Going into the game the second time everybody wanted it more because we felt like the first time we weren’t really prepared and we still had things to clean up,” Walton said.

La Vega and Argyle met again in the state quarterfinals at Waco McLane Stadium. La Vega was just coming off of a three-point win against Melissa yet still came in against top-ranked Argyle and destroyed them from start to finish. Running backs Walton and Cummings along with Kinne ran for 192,76 and 88 yards respectively as the pirates got revenge by a score of 44-20.

“Yeah we knew we would meet back up with Argyle in the playoffs and we’d be ready to play,” Kinne said. “Getting that win was huge for us it gave us a lot of confidence moving forward in the playoffs.”

“We didn’t really worry about the loss earlier in the season because we all knew if we did our job and Argyle did theirs we would meet again in the playoffs,” Cummings added. “That week everyone was dedicated and locked in ready to go every day in practice so we would be ready come Friday.”

Landry Kinne has been one of the best dual-threat quarterbacks this season as he has accounted for nearly 2,300 yards this season with 24 total touchdowns to just three interceptions as he has led the Pirates to a 14-1 record this season.

What leads to Kinne’s success? “Easy, my teammates.”

“The game is a lot easier when you have guys around you that love the game and have your back no matter what. Also just preparation before the game. Practicing and picturing yourself making plays and just doing your job and doing what you’re coached to do,” Kinne added.

The rushing duo of Jar’quae Walton and Elisha Cummings have also been a key reason for the Pirates’ success this year. They’ve been one of the best 1-2 punches in all of Texas this season. They both have nearly identical numbers as this year Cummings has run for 1,381 yards while Walton is only two yards behind. Including receiving yards, both backs are upwards of 1,500 yards from scrimmage with Cummings having 24 touchdowns and Walton having 21.

In the state semifinals against Springtown, Walton opened the offensive scoring with an 83-yard touchdown to make it 14-0 La Vega and they never looked back from that.

“I don’t want to take all the credit because if it wasn’t for the big boys and my WR’s and my fellow RB I wouldn’t have scored,” Walton said. “But I was glad to give the team some momentum to start the game off.”

Almost Halfway through the third quarter Elisha Cummings took a hand-off 46 yards to the house making it a 20 point lead for La Vega and with that being all she wrote.

“Coming out slow this game and defense saving us I knew what my team needed to do to get this win so I did what I had to do, it felt real good,” Cummings said.

The Last time La Vega and Carthage faced off was 2017 in the state semifinals. Carthage won 46-39 at The Star and would go on to win the state championship that year. More than two years later they will meet again. This time, inside of AT&T Stadium Friday, December 20th at 11 AM for the 4A D1 State Championship.

For Carthage, a perfect season and a seventh state title are on the line. For La Vega, a chance at number three in five years and to potentially tell the state that a new dynasty is here.

“I’m just focused on Friday and bringing back another state championship to Waco,” Kinne said.

Marcus are first in their district after win against Irving