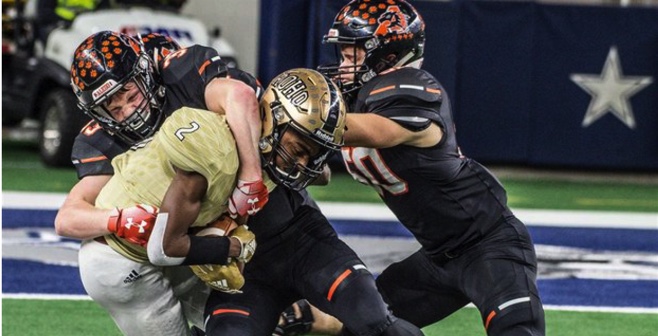 The Aledo Bearcats are back in the state title for the third straight year. After last season’s title loss to College Station, the Bearcats have a chance to win their second title in three years after demolishing the Rider Raiders 63-7. Aledo established dominance early, forcing turnovers and capitalizing on mistakes and never gave the Raiders a chance. Now, after a statement win, they’ll have a week to prepare for a Friday night matchup with Fort Bend Marshall for the 4A DII State Championship.

Aledo opened with an impressive return, taking the opening kickoff down to the Rider 37- yard line. Within minutes, the Bearcats, led by RB Jase McClellan, drew first blood as Mclellan punched it from a yard out to put Aledo up 7-0 with 9:45 left in the first quarter. The Bearcat defense rode the momentum, holding the Raiders to a quick three and out on their own six yard-line. The punt would have set Aledo up for good field position, but the Bearcats had other plans, as Tre Owens returned the punt for a touchdown to increase the Bearcats’ lead to 14 points with 8:41 left in the first quarter.

The hits wouldn’t stop coming for the Raiders, who threw a pick on their second possession of the game to give Aledo the ball right back inside the red zone. The Bearcats struck for their third touchdown of the night on a seven-yard touchdown pass from QB Jake Bishop to Devin Daugherty.

Finally, on their third possession, the Raiders were able to move the ball. After a promising start to the drive, Rider was forced to punt to give Aledo a chance to go up four scores at the end of the first quarter.

Within a couple seconds, McClellan ran in his second touchdown of the night to put Aledo up 28-0 with 10:47 left in the half. Rider couldn’t stop turning the ball over and after an impressive drive into the Bearcat red zone, Rider fumbled and the scoring drought continued.

Aledo responded quickly as McClellan’s third touchdown of the night gave Aledo a 35-0 lead with 5:11 left in the half. Needing a score before the half, Rider marched down the field approaching with caution, given their unluckiness with turnovers all night. Just when it seemed like the Raiders would finally get on the scoreboard, Owens struck again, this time with an interception deep in the end zone, which he returned 105 yards for a halftime score of Aledo 42 Rider 0.

The only thing stopping the Bearcats at that point was halftime and after the break, Aledo continued to roll. Bishop turned back to the air, hitting Mylen Hayhurst for a 30-yard score for a 49-0 lead early in the third quarter. The Bearcats couldn’t stop forcing turnovers and Demarco Robertscame up with a pick of his own, returning it 36 yards to give Aledo the ball at the 43 yard line. With McClellan on the bench with the rest of the Bearcat starters, Ryan Andersondid it himself, carrying it in from five-yards out for a 56-o lead with 5:06 left in the third quarter.

Rider was down and out, but the young backups were showing a lot of fight. After promising drive after promising drive came up short, the Raiders finally scored. RB Tre Byrd burnt Bearcat defenders around the corner for a 15-yard touchdown with 2:04 left in the third quarter.

By the fourth quarter, pretty much all the starters were sitting for the Bearcats, but it didn’t stop them as they punched it in one last time with 2:57 left in the game for a 63-7 final score.

The Bearcats turn their eyes towards Fort Bend Marshall, who defeated Calallen on Friday night. With the win, the Bearcats advance to their third straight state championship, and eighth in ten years. This year’s matchup will be as tough as it comes. Fort Bend Marshall has track speed on all sides of the ball and are led by top dual-threat quarterback Malik Hornsby