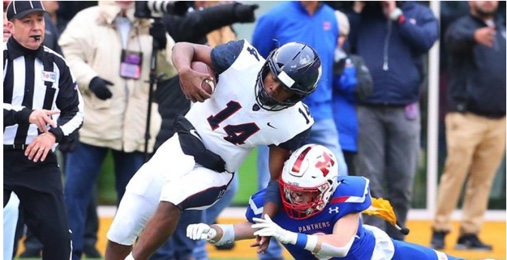 Waco- Allen (13-0) was handed their toughest game of the season, but still walked away unblemished with a 31-24 victory over The Woodlands (9-4) at McLane Stadium.

After an 8-yard punt, the Eagles took over from The Woodlands 31 yard line. Tisdale handed the ball off to Raylen Sharpe on a jet sweep, but Sharpe was looking to throw instead of run.

Ben Langston was able to jump the route and come up with an interception and the Highlanders would get another opportunity from their own 20 yard line.

The Woodlands were facing 3rd-and-26, when Casey Sunseri hit Matthew Bulovas on a 56-yard reception. The drive would ultimately stall and the Highlanders would tie the game at 10-all on a 31-yard field goal by Fabrizio Pinton.

Allen would take the first lead of the game after LB Keith Johnsonwas able to block a Highlander punt and recover the football at the 18 yard line.

The Eagles had no luck moving the ball and were forced to settle for a 35-yard field goal by James Griffin.

The Woodlands put together an eleven play drive that was would end in a touchdown on first play of the second quarter.

Junior RB Breyton Gilford (20-115, 2TD) was pushing towards the end zone from 7-yards out, but he fumbled into the end zone. McKadeMettauerwas in the right place at the right time and jumped on the ball for a Highlanders touchdown.

Allen would force The Woodlands to punt on their opening possession of the second half. The Eagles needed just one play to extend their lead.

Ben Mims would throw an interception after The Woodlands blocked a 45-yard field goal attempt by Griffin.

Grant Robinson would capitalize on the turnover and score from 2-yards out and Allen took a 31-17 lead.

The Woodlands would make one last attempt at a comeback, behind Gilford’s second rushing touchdown of the game, but It wasn’t enough.