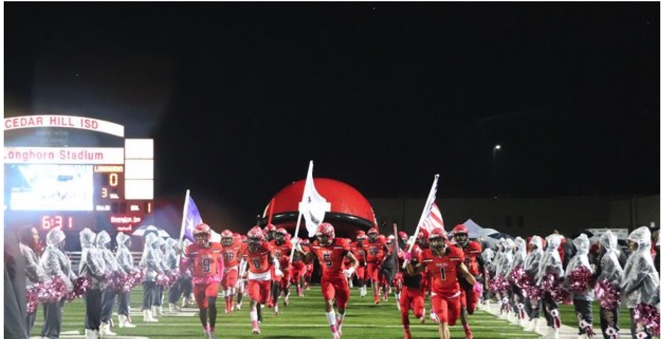 Another week, another Cedar Hill drubbing as Lake Ridge was the Longhorns’ victims tonight.

The Old Coach’s Nick Walters was in the building as the Longhorns took the field on a rainy Friday night looking to bounce back from their first loss of the season last week against Mansfield Summit.

The Eagles who struck first to open the game as Dewone Jackson ran it in to put Lake Ridge on top 7-0.

Cedar Hill answered right back as QB Shayne Lawrencefound Zakhari Franklinto tie the game up. The QB-WR duo was unstoppable all night scoring three touchdowns in the first half alone.

After back and forth touchdown drives, the game was evenly matched with the teams tied at 14 apiece. That all changed when Eagles QB Chandler Rogerswent down with an injury and didn’t return for the rest of the game.

The Longhorns took advantage, pouring on the points as Franklin caught two more touchdowns and Quin Brightadded another for a halftime score of 35-14.

Cedar Hill’s Daryon Triche added another touchdown in the second half and the Eagles managed to put one more scoring drive together, tacking on a field goal in a sleepy second half for a 42-17 final score. Lawrence finished with 216 yards and five total touchdowns to help put the Longhorns back in the win column.

Cedar Hill now sits at 6-1 on the season tied with Desoto of the “District of Doom”. The Longhorns’ now look forward to a tough road test against a South Grand Prairie team that is 3-1 in district play.

Lake Ridge falls to 4-2 on the season and 3-1 in district play, with playoffs still within reach. The Eagles now head back home to face off against Mansfield, a team that’s disappointed this season with a 2-5 record.