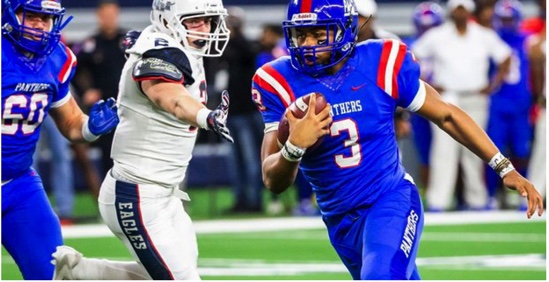 Allen was down 35-14 at halftime. By the end of the third quarter, they had tied it. It was time to see whether Duncanville had championship mettle or if they would crumble. The Panthers stood up and pulled off the win, taking down the #1 team in the state to advance to the state title.

Duncanville opened with as good a statement as any: a touchdown on the first play from scrimmage. RB Trysten Smith raced past Eagles defenders on his way to a 72-yard touchdown and the Panthers quickly had the advantage. Allen wasn’t down long as their star QB Grant Tisdalefound Theo Weasefor a 62 yard touchdown and it became apparent less than two minutes into the game, that this wasn’t going to be a defensive game.

The Panthers slowed the pace on their second possession, taking over four minutes off the clock before Javon Fountain found the edge for a 21-yard touchdown and Duncanville was back on top 14-7.

After back to back punts, the first quarter ended with Duncanville ahead 14-7.

Allen wasn’t behind long as Tisdale found Wease once again to tie it back up. Then, Duncanville took off.

Ja’Quinden Jackson showed off his speed running it in from eight yards out on the ensuing possession. The Panthers defense held up their end of the bargain forcing another Eagles punt. Facing a long field ahead, Jackson took matters into his own hands, shooting out of a cannon for a 92-yard touchdown. All of a sudden, the favored Eagles were in a two-score hole.

Allen, needing a score before halftime, drove all the way to the Panther red zone, when Chris Thompson Jr came up with a huge interception to send the Panther crowd into a frenzy. As time ran out on the half, Jackson found DaveonWalkerfor a 33-yard touchdown to send the shell-shocked Eagles into the half down 35-14.

The Eagles never lost hope, even when they opened the second half with, what should have been a quick turnover on downs. Instead, facing fourth and long from their own 40- yard line, JustinHallcarried the team on his back for a 60-yard touchdown on a fake punt to bring Allen back within striking distance. The Eagles defense made a stand, and midway through the third quarter, Tisdale found Darrion Sherfield for a 36-yard score. From down 21 points to just seven, Allen had all the momentum and they weren’t slowing down.

In desperation, the Panthers went for it on fourth down and failed. Allen had the ball on their own 48-yard line with a chance to tie it up. Caelon Manning did it himself, bringing Allen all the way back into the game. At the end of the third quarter, it was all tied up 35-35.

With a state championship berth on the line, both defenses amped it up, and the shootout quickly turned cold with no points scored through the first eight and a half minutes of the final quarter. Then, Jackson broke through, stepping through defenders for a 40-yard touchdown to end Allen’s unanswered scoring streak and giving the Panthers the advantage with just over three minutes remaining.

Allen was desperate, and in desperation came mistakes. Needing a score, Allen went the wrong way, and a safety by the Duncanville defense effectively ended the Eagles’ comeback bid and their state championship hopes.

For the first time since 1998, the Duncanville Panthers are back in the state title game. They’ll face a tough test in North Shore, who blew out Lake Travis 51-10 in their state semifinal game. The Panthers are trialed and tested, having taken down Southlake Carroll and Allen in back to back weeks.