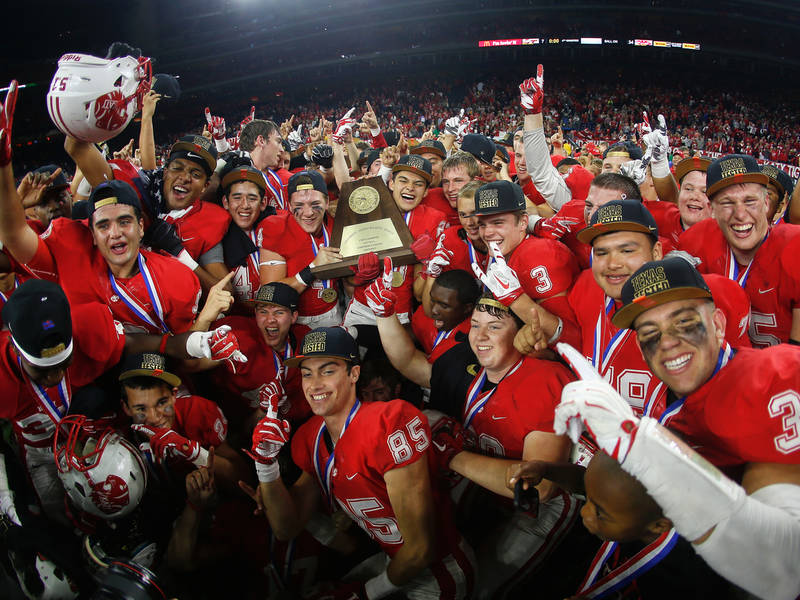 It truly is the most wonderful time of the year.

The weather is cooling, the leaves are changing, Thanksgiving is right around the corner. Most importantly, the first round of the Texas high school football playoffs kicks off on Thursday with 352 games.

With games all over the state to choose from, here’s a guide of games to watch.

Coppell vs Southlake Carroll: Under new head coach Riley Dodge, Southlake Carroll is doing what they do best: winning. The Dragons finished the regular season undefeated, led by QB Will Bowersand ATH TJ McDaniel. Defensively, they’re led by 2020 DB RJ Mickens, who’s been the voice of a stout Dragon defense. Their opponent, Coppell, is no slouch. Sitting at 7-3 on the year, the Cowboys haven’t  been out of any game they’ve played in. Led by 2020 QB Drew Cernigliaand ATH Jonathan McGill, the Cowboys aren’t backing down from anybody.

Sachse vs Plano East: Sachse is district champions once again, and their reward is a rematch with an absolute buzzsaw in Plano East. It’ll be a battle of offenses as Sachse loves to spread out the ball and can cause some problems for the Panthers. The Panthers excel in the passing game, led by QB Brandon Mallory’s 2938 yards and 34 touchdowns. In a rematch of Plano East’s 29-7 win early in the season, look to Sachse to take revenge on their spoiled homecoming

Guyer at Flower Mound-5-5 Guyer is no slouch, and Flower Mound should expect a fight. Led by the three-headed offensive monster of Eli Stowers,Kaedric Cobbsand Seth Meador, the Wildcats have been racking up points all season long. Flower Mound has an offensive duo of their own, in QB Blake Shortand RB Pierce Hudgens. While the Jaguars have had more success this season, Guyer is tested and ready to keep up with the big boys.

College Station vs Mesquite Poteet- Reigning state champ College Station is back in the playoffs, but they’re missing a lot of the talent that won them their title. Offensively, they’re headed by QB Brandon Williams and a committee of running backs who have done an effective job in replacing Marquez Perezand DaDa Anderson. Defensively, they’re led by Texas Tech commit Brandon Joseph. For Poteet, the offense revolves around top 2020 RB Seth McGowan, who’s had an outstanding junior campaign. If the Cougars run defense steps up, their path back to the title could be well on its way.

Skyline vs Desoto-Desoto managed to avoid a matchup with Duncanville, and instead….they get to play 7-2 Dallas Skyline. Led by Velton Gardner who’s as dangerous on the ground as he is through the air the Raiders will cause problems for the Eagles’ defense. Desoto is led by Shun’Darion Ward and La’Vontae Shenault. Defensively, they’re headed by DeVere Levelston and 2020 CB Jabbar Muhammad. This is as evenly-matched of a playoff matchup you’ll find.

Ft. Bend Travis at Katy-After dropping their season opener to North Shore, Katy has been on a tear. The Tigers have gone 9-0 since their lone loss, dominating their district and pulling off wins against Atascocita and Clear Springs. Led by a powerful backfield of QB Bronson Mclelland and RB Deondrick Glass, the Tigers are on the prowl for another state championship. Fort Bend Travis on the other hand, sits at 8- 2 with losses to Richmond Foster and Ridge Point. Led by a stout passing attack headed by four-star WR Arjei Hendersonand three-star WR Parker Washington, Travis isn’t backing down from a tough test.

Klein at Westfield- Westfield lost QB Teshaun Gipson early in the season and wasn’t expected to make the playoffs, much less the district title, but sure enough, here we are. The Mustangs sit at 9-1 on the season with their lone loss coming against North Shore (Is it becoming obvious that North Shore is really good) and have some impressive wins against Lamar, Spring and Alief Taylor. Led by backup QB Ra’Quan Washington and RB Rayshawn James, Westfield hasn’t missed a beat on offense. For Klein, they’re headed by ATH Tyson Thompson. In a play-in game against College Park, Thompson went off for over 300 all-purpose yards, contributing on kick and punt returns, as a defensive back and at his primary position of WR. Westfield should roll against the Bearkats, but after last season’s first round upset of Spring, you can’t put anything past Klein.

CyFair vs Lamar-The reigning state champions have had a relatively underwhelming season. After opening the season with an impressive win against The Woodlands, the Bobcats dropped district matchups to Cy-Falls and Jersey Village and finished third in the district. However, don’t be fooled, they’re not a bad team. They have impressive wins to the aforementioned Highlanders, Cy Creek and Stratford. They’re a defensive powered team, the most points they’ve let up is 24, in their loss to Jersey Village. Lamar is 7-3, but finished undefeated in district play. They’ve lost a lot of talent from last season’s campaign, but they still have talent like Texas Tech CB commit Alex Hoganand Rice WR commit Zane Knipe.

Barbers Hill at Manvel- Manvel had to replace a lot of talent from last year’s state runner up team, including their head coach. The rebuild didn’t take very long and Manvel’s back in the playoffs. Replacing Kason Martin has been tough, but Josh Coltrinhas done an exceptional job, throwing for over 1380 yards and 21 touchdowns. He’s matched by the backfield duo of Garrison Johnsonand Ladarius Owenswho’ve combined for 1902 rushing yards. For Barbers Hill, they managed to sneak into the playoffs and they’re not taking the opportunity lightly. Led by Coach Tom Westerberg, they’re a well coached team who shouldn’t fall behind early. Facing off against a Manvel team with a lot of pressure on them, they’ll look to make the Mavericks nervous early and capitalize off mistakes.

Reagan at O’Connor- The O’Connor Panthers are undefeated district champs and they run into an 8-2 Reagan team that could preemptively end their season. The Panthers offense is led by David Dodd who’s thrown for over 1500 yards and 14 touchdowns. The junior QB is matched by RB Zion Taylor, who’s run for 1044 yards and 10 touchdowns. Reagan on the other hand isn’t as well balanced, headed by Travis Sthele who’s thrown for 1653 yards and 16 touchdowns. If you’re in the San Antonio are, this is the game to attend.

Mesquite at Midway- Tanner Mordecaigraduated and the Midway Panthers’ offense was forced to change. Now headed by running back James Fullbright, the Panthers finished the season 8-1 and undefeated in district. They’re a well-coached team, and coming off big wins to finish off the season, they’ll look to carry that momentum into a deep playoff run. They’ll have to get past a Mesquite team that’s better than their record indicates. Led by RB LaDarius Turner, Mesquite knows how to score points. Aside from one game, where they only scored four (!) points, their lowest amount of points scored was 20. They’ll need to come out fast to pull off the upset, but in the playoffs anything is possible.

Tomball vs John Tyler-If you’re looking for offense this is the game to be at. Both teams average over 350 yards per game. The Cougars are headed by quarterback Hunter Dunn who’s thrown for 2068 yards and 14 touchdowns this season. He’s got weapons all around in Ja’Kobi Holland, Logan Compton, Jay’ris Smith and Daveon Vean. John Tyler is led by QB Devien Woods and WR Keandre Street. The teams are pretty evenly matched, and though most expect John Tyler to come up with the win, the score will be high, and the Cougars aren’t going to back down easily.