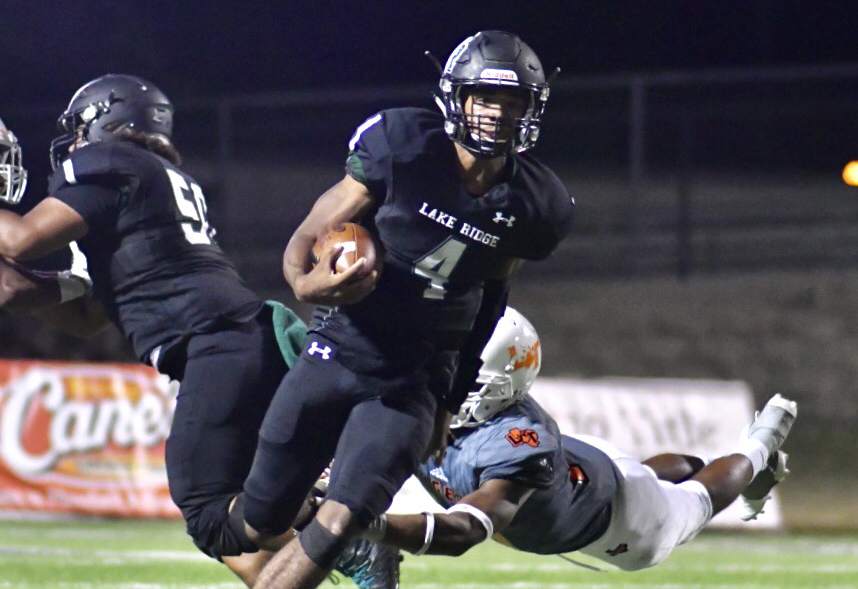 The 2-5 Mansfield Tigers came into the game with upset on their mind. They trailed 5-2 Lake Ridge by just three at the end of the first quarter 10-7.

After a huge defensive stop to open the second, Mansfield punched it in to take a 14-10 lead. They’d go one to add a 43-yard field goal and another touchdown to take a thirteen point lead with just minutes left before halftime. Lake Ridge took the adversity head on and never panicked.

With just seconds remaining in the first half, Adrian Hawkins found Keylan Johnsonfor a seven-yard touchdown to make it a one-score game at halftime, 23-17.

The Eagles made the necessary halftime adjustments then took off from there.

After forcing a turnover on downs, Hawkins threw a strike to tie the game at 23.

The Tigers opened the final quarter with a quick score to tie it up as QB Hunt Young found the end zone for the second time.

It was the last time Mansfield would find the end zone.

Lake Ridge returned the ensuing kickoff all the way back to the Mansfield one-yard line, one yard short of the second return touchdown of the game. Seconds later, Dewone Jackson punched it in for a 37-30 score.

The Eagles defense clamped down forcing back to back turnover-on-downs, including a fourth down stop with under a minute remaining to seal the comeback victory.

Lake Ridge improves to 5-2 overall and 4-1 in the district sitting at the third seed with games against Grand Prairie and Mansfield Summit remaining. They’re still locked in a three-team tie between Desoto and Cedar Hill, but a win against Mansfield all but locks in their chance a playoff berth.

For Mansfield, hope is slipping away. The Tigers sit at 2-5 overall and 1-4 in the district, tied with Grand Prairie for second-last in the district. With no chance at the playoffs, Mansfield no looks to cause chaos and make a statement before the offseason, with games against Cedar Hill and Grand Prairie remaining.

Marcus star, LSU commit Marcel Brooks Can Do It ALL | 2018 Week 9 Spotlight