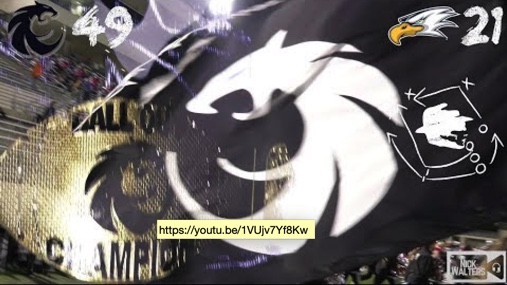 With a chance to clinch a playoff spot, Guyer didn’t back down clawing their way past the Eaton Eagles 49-21.

The Old Coach’s Nick Walters was in house to capture, what turned out to be a night full of offensive fireworks.

Once Guyer grabbed the lead, they wouldn’t let go. Four-star QB Eli Stowers steered the offense with two long touchdowns, a 65-yard rush and 75-yard pass, to match a 35-yard rushing touchdown by Byron Phillips Jr. Meanwhile,Eaton’s offense overcame early turnovers and a missed field goal, striking from 75 yards and eight yards to come within fourteen. With just seconds remaining in the first half, Eaton looked to add another touchdown before the half but a fumble in the red zone ended all hopes for a halftime score of 28-14

Eaton simply could not hold on to the ball, opening the second half with another turnover. However, after a huge defensive stop, the Eagles made up for it just minutes later, capping off a 75-yard touchdown drive to pull within one score 28-21 with 11 minutes left in the third.

Guyer’s defense continued to apply pressure, and it was all Wildcats from there.

2020 RB Kaedric Cobbsadded his second rushing touchdown of the night, bowling over defenders for a 37-yard touchdown and Stowers’ big day continued with a 1-yard touchdown pass at the end of the third quarter for a 42-21 score.

The Eagles offense couldn’t get anything rolling to try and close the gap and Cobbs’ third touchdown of the night sealed the 49-21 win for Guyer.

It was an offensive heavy night for Guyer, and the exact opposite for Eaton. The young core of Stowers and Cobbs couldn’t be stopped, while Eaton couldn’t seem to catch a break. Fumbles right before and after the half hurt any chance the Eagles had of tying the game. The typically stout Eagles’ running game couldn’t get much to work outside of the second quarter.

Moving forward, Guyer looks toward 1-6 Byron Nelson. The Wildcats however sit at 5-3, but 4-1 in district, trailing only Southlake Carroll in playoff seeding. With two games left, and with playoffs still not intact, Guyer can’t afford a let down game.

Eaton on the other hand sits at 2-3 in district, now on the outside looking in in the playoff picture. They head home with undefeated Southlake Carroll up next. The Eagles will need to finish out 2-o in order to guarantee a playoff spot. Though it’s unlikely they can pull off the upset against the Dragons, in Texas high school football, anything is possible.

Grapevine Dominates the Battle of the Red Rail