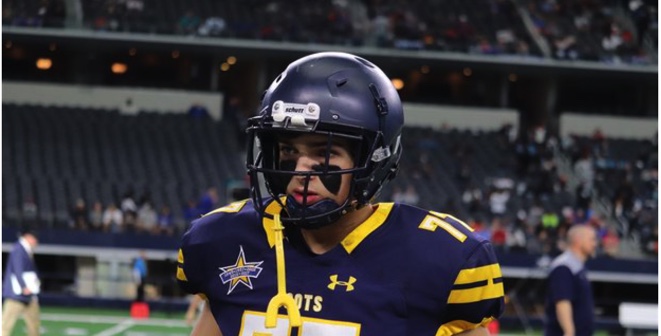 For the third year in the row, the Highland Park Scots are state champions.

The Scots dominated for the first three quarters of the game, but the Shadow Creek defense proved a tough test, keeping the Sharks within striking distance. After a 99-yard rushing touchdown by Jamarian George, uneasiness began to creep in. However, in their first state title game, the nerves got the best of Shadow Creek who couldn’t complete the comeback, falling 27-17

Looking for the three-peat, Highland Park opened with a splash returning the opening kickoff to the Shadow Creek 28 yard line. Within seconds, the Scots punched it in as QB Chandler Morris connected with Bennett Brown for a 7-0 score less than a minute into the game.

The Scots defense made a stand on their second drive, forcing the potent Shark offense to punt it away after a false start killed the drive. The Sharks defense figured it out, and Xavion Alfordcame up with a big interception to give Shadow Creek the ball inside the Scot 30. George only needed two plays to score, finding Jared Jackson for a 14-yard toe- tapping touchdown along the sideline for a 7-6 score with 6:06 left in the first quarter. After a slow start, the Sharks were swarming.

Led by four-star DE Alec Bryant, the Shark defense forced a Highland Park punt with the chance to take their first lead of the game late in the first quarter. On the first play of the drive, George went for the home run and came up short with the ball landing in the hands of safety Whit Windfield. The Scots marched downfield, capitalizing off the mistake with a quick touchdown throw to Andrew Bonnett.

Shadow Creek was down but they weren’t backing out, driving down the field for a field goal to bring them within five points, 14-9. Then, midway through the fourth quarter, after an exchange of punts on both sides, the Scots turned to Finn Corwin who took a screen 24 yards to the house for a 21-9 lead with 6:57 left in the half. A big return on the ensuing possession set the Sharks up well inside the Scot territory, but on third and long the Sharks got desperate and the Scots came up with their second interception of the night.

At halftime, the Scots were leaving the Sharks gasping for air with a commanding 24-9 lead.

After the half, the Scots lead grew with a field goal on their opening drive to take a 27-9 lead. Shadow Creek was struggling to get anything going, but their defense was keeping them in the game. The defense stepped up, not allowing another point for the rest of the quarter.

Shadow Creek had the ball to start the final quarter, and thanks to the play of their defense, they had the chance to get back in the game. George was struggling to escape the relentless Scot front seven and it forced another crucial mistake, an interception.

Things seemed hopeless for the Sharks. After forcing another punt, the Sharks offense set up looking to score. Facing 3rd and 26 from their own one yard line, Jamarian Georgefound space. The 5’6 quarterback accelerated down the field dodging defenders to break the longest rushing touchdown record in a state championship history. All of a sudden, the Sharks were behind by just ten points, 27-17.

The Sharks defense was now firing on all cylinders, forcing a quick three and out with just over five minutes left in the game. After it seemed the game was all but sealed, Highland Park was now in trouble. The Sharks offense couldn’t ride the momentum, failing to convert on fourth and four. After the defense forced yet another punt, the Sharks offense had the ball with just a minute and a half left with a chance to shock the world. The Sharks got all the way into Scots territory, before an interception ended the Sharks glimmer of hope.