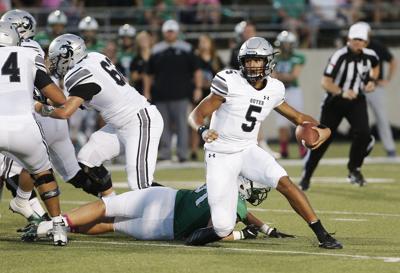 Not many people expected this, especially by such a wide margin of victory. No one could have predicted the 5-5 Guyer Wildcats stomping 8-3 Flower Mound 52-21

For such a high-scoring affair, the game opened slowly with teams exchanging punts on their first possessions.

Finally, Guyer struck with a field goal and they took control of the momentum. The defense stepped up holding the Jaguar to another punt for a 3-0 lead at the end of the first quarter.

The Jaguars offense finally woke up. On the ensuing possession, QB Blake Short found Jake Welch for a 78-yard touchdown to put Flower Mound right back in the game 14-7. Guyer fumbled on their next possession, and Flower Mound had a chance to tie it up. However, Short had a fumble of his own, and the Wildcats capitalized to take a 17-7 lead.

Neither team could get much else going and the score remained the same at halftime.

Flower Mound looked to reduce the margin and they came out of the half firing. Short completed an 8-yard touchdown to bring the Jaguars within three.

After another exchange of punts, the Wildcats struck again, widening the gap to ten points once again. Cobbs struck for his third touchdown, this one from 19 yards out and the Wildcats scored once again to go up 31-14.

Needing something, anything, the Jaguars drove down the field for a 31-21 score. It was the last time Flower Mound would score once again.