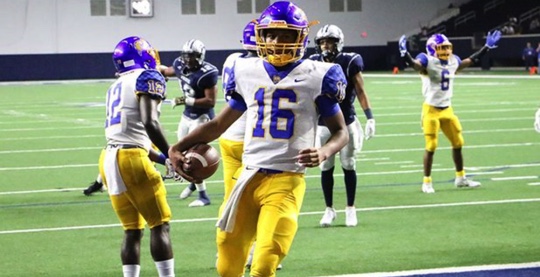 Last season, Waco La Vega lost in the state semifinals, ending their undefeated season. This year, they wouldn’t let that happen as the Pirates bowled over the Decatur Eagles 53- 0 to advance to the state championship. Led by RB John Richards, the Pirates enforced their will all game and never took their foot off the gas until the game was safely out of reach.

John Richards made his name known early and often to the Decatur defense with all three touches on the opening drive, including a 39-yard rushing touchdown to put La Vega up 7-0 early. Decatur looked to respond with a promising first drive of their own, until the Pirates’ defense came up big, with a forced fumble on fourth down to keep the Eagles out of the end zone.

Then, Decatur got a break of their own, as they got a hand on a Pirate punt, which went 13 yards giving the Eagles manageable field position for their second drive. However, things went south quickly as the Pirates defense came up with another forced fumble with five minutes left in the first quarter. Seconds later, the Richards did it again, rolling in from 50yards out to put La Vega up 14-0 with 4:47 left in the first.

At the end of the first, Richards had 139 rushing yards and two touchdowns on just six carries and the Pirates held a two touchdown lead.

The John Richards show continued into the second quarter, as he barreled over four defenders on his way to his third touchdown of the night with plenty of time before the half. For much of the night, Decatur’s offense was moving the ball, but weren’t able to finish and once again they were forced to punt.

On the ensuing Pirates’ possession, QB Ara Rauls got in on the action with a 40-yard keeper to bring La Vega into Eagles territory and just plays later, Jar’Quae Walton punched it in from nine yards out to cap a 92-yard drive and the margin widened, 27-0 with 2:47  left in the half. The Pirates defense continued to hold and Rauls got his first touchdown of the game with 1:23 left before the half for a halftime score of 33-0.

Decatur opened the second half with the ball needing a score to get back in the game, but a once promising drive came up short and the Eagles turned it over on downs. Halftime didn’t slow down the Pirate offense, as Richards hit 197 yards on La Vega’s first position of the half, paving the way for Taequan Tyler’s 14-yard touchdown for a 40-0 score.

After establishing their dominance on the ground, La Vega decided to turn to try their hand through the air as Rauls found Josh Hamilton in stride for a 72-yard touchdown with 5:05 left in the third quarter. If there was any chance of a miracle comeback, the Pirates had erased it with over 17 minutes left to play.

The Pirate defense’s dominance continued as Demarr Hayes and Jordan Rogers dominated the line of scrimmage and at the end of the third quarter, La Vega had the ball again, up 46-0.

The back and forth continued as the Pirates’ offense seemed to have let off, having already established a comfortable lead. However, just when it seemed like the score was set, Daylon Williams came up with a forced fumble, the Pirates’ third of the night, to preserve the shutout. Plays later, Williams ran it in himself from 60 yards out to put La Vega up 53-0 with 5:40 left in the game.

Decatur heads home at 8-7 after an incredible postseason run. They had no answer for the Pirates’ offense and after a season of up and downs, they couldn’t quite pull off the upset.

La Vega improves to 13-2 on the season and advances to the state championship where they’ll face the winner of Carthage and Liberty Hill, as they have their eyes set on their second state title in program history.