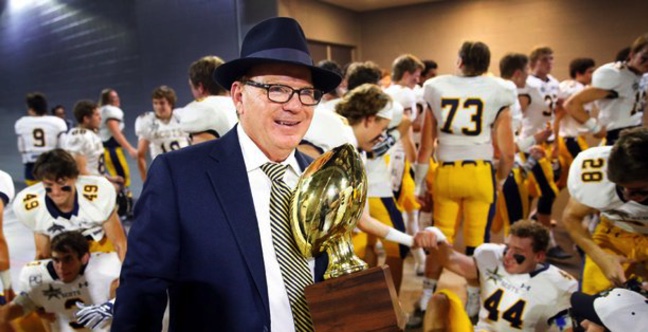 Highland Park is on their way to their third straight state championship with a dominating 43-21 win over Denton Ryan.

Both defenses showed up early, making life hard for typically potent offenses on both sides. The Scots broke through first as Chandler Morrisfound Bennett Brown on fourth down for a 31-yard touchdown to take a 7-0 lead with 8:35 left in the first quarter. After the Scots’ defense held up, Highland Park had a cache to make it a two score game. Led by Morris the Scots quickly drove into Raider territory, but just yards away from six, Morris threw an interception and Denton Ryan was back in action.

The Raiders used trickery to get into Scots territory, as RB Keori Hicks found Jamarion Robertson for a big gain. It was all in vain, as the Scots’ defense stepped up to make the stop and retook possession, looking to make up for the interception. After a long drive, Morris punched it in himself from four yards out to give Highland Park a 14-0 lead midway through the second quarter.

Denton Ryan finally put a scoring drive together, led by Drew Sanders, who had two long runs, including the touchdown that brought the Raiders within seven points late in the second quarter.

As time ran out on the half, the Scots struck once again as the Morris-Brown connection got together for the second time to put Highland Park up 21-7 at halftime.

Coming out of the break, Denton Ryan needed a score if they wanted to get back in the game, but things took a turn for the worse when Billy BowmanJr fumbled, giving the Scots the ball early in the second half. Morris did it again, running in his second touchdown of the game and a two-point conversion by Finn Corwin put Highland Park up 29-7.

The Raiders recovered from the fumble, driving quickly, responding with another Drew Sanders’ touchdown. Now down 29-14, the Raiders forced the first Scots’ punt of the game, late in the third quarter. With a chance to get back in, the Raiders fumbled the punt return, giving Highland Park the ball right back. Morris ran in his third touchdown of the night, and before Denton Ryan could blink, they were down by three scores again.

The Scots weren’t done yet and Morris found Brown once again, for their third touchdown as a duo to increase their lead 43-14 midway through the fourth quarter. Denton Ryan was down but they weren’t done fighting. Drew Sanderswho had a phenomenal game, punched in his third touchdown of the afternoon for a final score of 43-21.

For Denton Ryan, their season ends at 14-1 as they had no answer for Highland Park and the stout Scots defense.

With the win, Highland Park advances to the state title once again, with a chance at a three-peat. The Scots will face off against the winner of Shadow Creek and Wagner on Saturday morning.