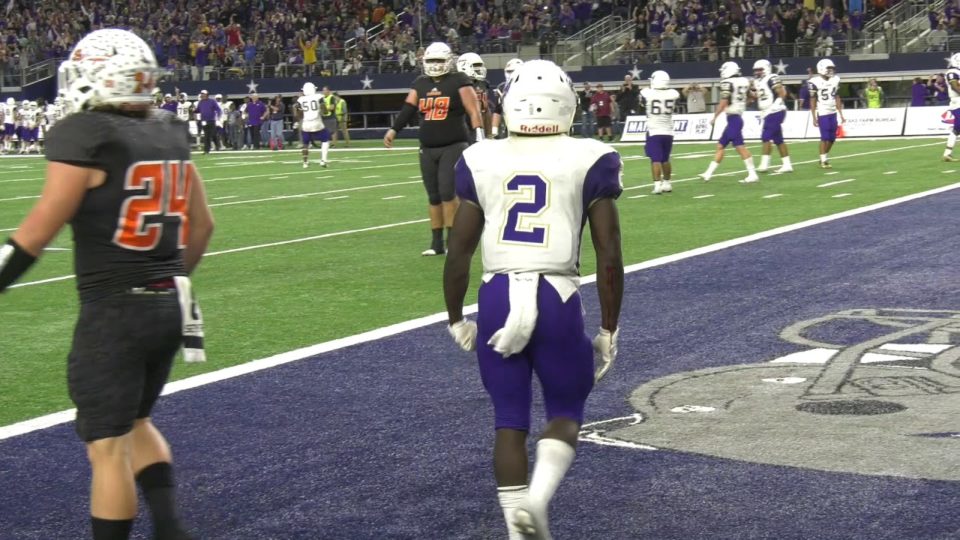 Arlington- Tyrek Horne had the performance of a lifetime and paved the way for Mart to win back-to-back state championships with a dominant 76-33 victory over Gruver.

Horne finished the game with 12 carries for 291 yards and 7TDs and won the Offensive MVP award.

The Gruver defense forced Mart into their first third down of the game with 9:05 in the second quarter. Shatydrick Bailey ran a reverse for 18 yards to keep the drive alive for the Panthers.

Roddrell Miller would score on the next play with a 30 yard run and Mart would take a comfortable 33-12 lead over the Greyhounds.

Gruver (14-2) relied on WR Jalin Conyers to provide a spark for their offense, and he delivered by scoring 4 of the Greyhounds’ 5 touchdowns.

Conyers took a direct snap and went airborne to get in for the first score of the game for Gruver at the 3:20 mark of the first quarter.

Mart (15-1) would set the tone early in the first quarter, when Anthony Sauceda knocked the ball loose from a Gruver receiver and Tony Sanchezrecovered for the Panthers at the Gruver 26-yard line.

Horne would get his first touchdown of the game two plays after the recovered fumble on a run from 16-yards out.

The Greyhounds would strike just ten seconds into the second quarter, when Keegan Kelp connected with Conyers on a 42-yard pitch-and-catch, but Gruver still trailed 27-12.

Mart would receive the ball after halftime and continue their offensive supremacy.

Bailey carried the ball twice on runs of 32 and 7-yards, ultimately setting up the seventh rushing touchdown of the game for Horne from 21-yards out.

The Panthers would get their lone turnover of the game on a high snap late in the third quarter, but Gruver couldn’t capitalize.

The Greyhounds would get their final score of the game with :13 remaining in the fourth quarter on a 3-yard run by Fernando Valdez.

Marcus star, LSU commit Marcel Brooks Can Do It ALL | 2018 Week 9 Spotlight