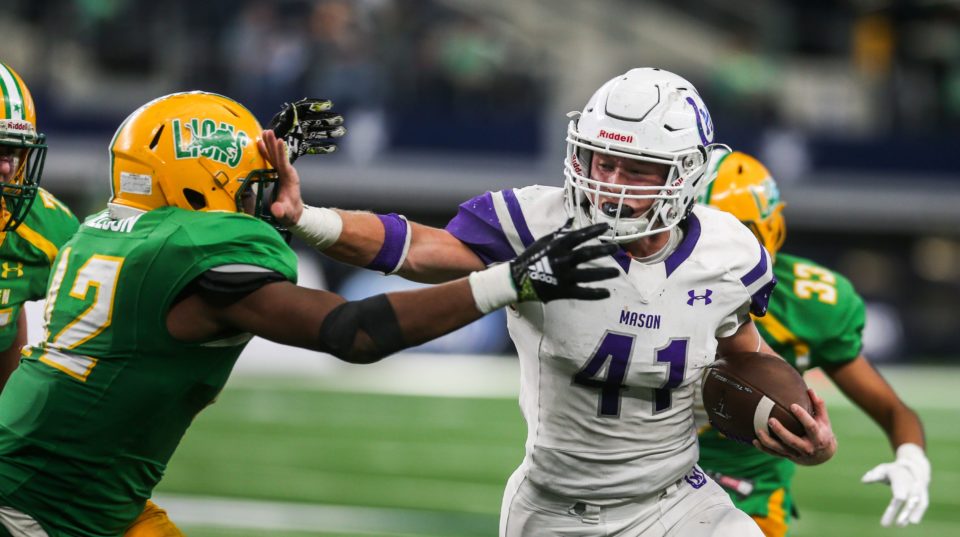 Arlington- The Punchers were too physical for New Deal to handle. Mason captured their second state title in commanding fashion 44-6 over the Lions under the bright lights of AT&T Stadium.

Mason (16-0) had four different players score touchdowns on the ground and their defense pitched a shutout during the final three quarters of play.

New Deal (15-1) was able to score their lone touchdown on a drive that started at the Mason 11-yard line, after a high snap forced a turnover on downs for the Punchers.

Jett Whitfield connected with Kendell Dunn on a 15-yard strike that put the Lions in position to tie the game up at 7 all, but Mason was able to block the PAT and New Deal trailed 7-6.

Mason overwhelmed New Deal in the trenches on both sides of the ball.

The Punchers secondary reaped the benefits of that pressure, as they were able to come away with two interceptions.

In the second quarter Mason put together an offensive drive that was the blueprint of their gameplan.

Mason took the ball over at their own 18-yard line with 11:52 remaining in the quarter. The Punchers methodically put together a 15-play 84-yard scoring drive that took 8:47 off the clock.

The victory gave Mason native and head coach Kade Burns his 100th victory at the helm of his alma mater.