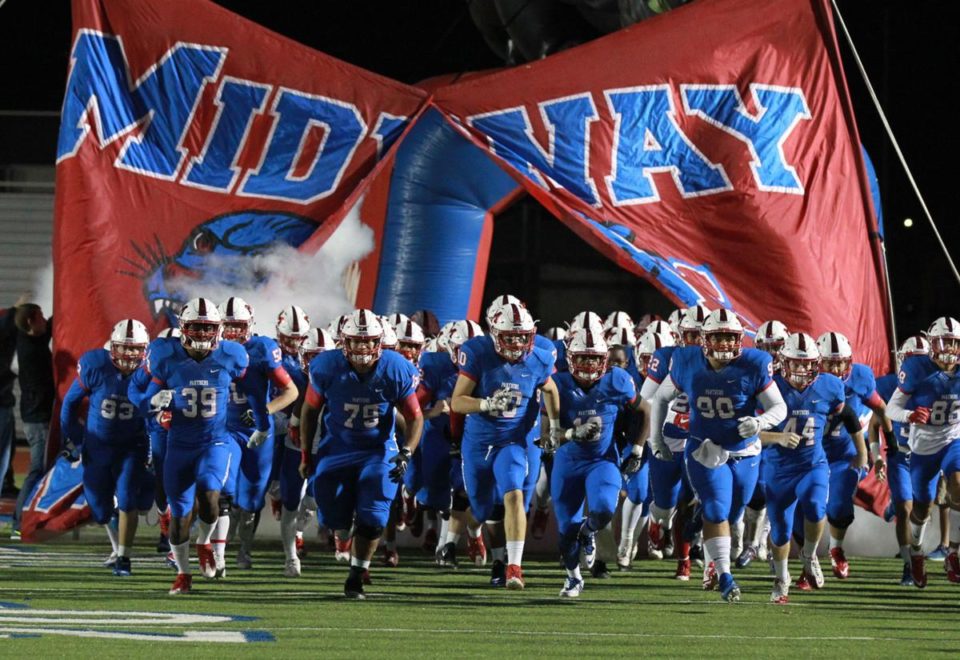 The Midway Panthers couldn’t be stopped against Sachse.

The Mustangs had no answer for the backfield duo of James Fullbright and Nick Jimenez.

The Panthers were dominant early and often scoring on their first two drives capped by an eight-yard rushing touchdown by Fullbright and a quick touchdown throw minutes later by Jimenez.

After turning it over on their first possession, Sachse was down 14-0 before they could even blink. Their misfortune didn’t end, as they fumbled once again on their ensuing possession, giving the ball right back to the Panthers at the end of the first quarter.

A huge fourth down stop gave Sachse a chance to get right back in it, and the offense finally got it rolling on a Derrick Rose one-yard touchdown to bring the Mustangs within seven early in the second quarter.

Midway wasn’t going to let Sachse get a chance to swing the momentum, showing off  their deep ball ability as Jimenez found Will Nixon for a 66-yard touchdown to extend their lead to 14 points midway through the second quarter. The Panthers’ defense wanted in  on the scoring action as Parker Nall returned an interception 70 yards to increase their lead 28-7.

With seconds left before the half, Sachse needed a scored and Derrick Rose came up big again with a three-yard rushing touchdown. At halftime Midway led 28-14.

The third quarter was slow until Midway’s offense began to roll once again, Jimenez found Nixon for a two-yard touchdown midway through the third, to put Midway up 35-14. The momentum wasn’t shifting Sachse’s way, as they turned the ball once again, but after an interception of their own, and they began driving at the end of the third quarter down 35-14.

Myles Nash punched it in to open the fourth quarter and brought Sachse within two scores with nine minutes left in the game. Fullbright wouldn’t let the Mustangs within striking distance taking the ball 59 yards to put Midway up by 21 again. The back and forth continued, as Rose found Nash for a 58-yard touchdown for a 42-28 score midway through the fourth. Jimenez responded on a failed onside kick with a 38-yard rushing touchdown and with four minutes left, Midway led 49-28.

Needing a score quickly, Sachse threw a pick-six and was officially out of reach, 56-28 with under four minutes remaining.

Midway clinched the victory and moves on to face Klein Oak on Saturday Dec. 1 at Kyle Field.

Klein Oak is trialed and tested, with their only two losses coming against Klein Collins and The Woodlands. With impressive wins against Spring and Round Rock thus far in the playoffs, the offense-heavy Panthers will give Midway all they can handle.

Lewisville vs Duncanville | 2018 Area Round Movie